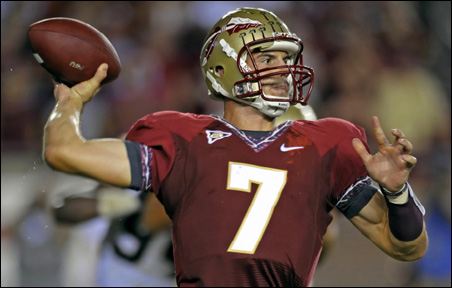 Before ESPN turned the NFL Draft into a circus, cranky fans were limited to a gallery at the Marriott Marquis Hotel in New York. The Marquis, in Times Square, hosted the draft for years before the league shifted it to the theater at Madison Square Garden in 1995, and then on to the Jacob Javits Convention Center and Radio City Music Hall.

Unless you worked for the Giants or the Jets, the reaction from the Marquis gallery raised more giggles than hackles. In 1979, Giants fans booed the first-round selection of Phil Simms, a quarterback from Morehead State in Kentucky that most of them had never heard of. Simms wasn’t keen on playing for the Giants himself. But in the end, he helped the Giants win two Super Bowl championships.

The moral of that story: Just because a lot of people are loud doesn’t mean they’re right.

In recent years, teams began hosting draft parties for season-ticket holders, fans and sponsors at their headquarters, offering spreads of food and booze for a fee that included access to press conferences. Why any team would welcome the same people who boo them on Sundays anywhere near the draft process baffles the hell out of me, though it shows that some businesses will tolerate anything to get their hands in the wallets of their supporters.

And so it was Thursday night, when the Vikings chose Florida State quarterback Christian Ponder in the first round, and some of the more than 1,000 party guests inside the fieldhouse at Winter Park acted like their hosts took Christian Laettner, or announced they were giving Dimitrius Underwood another chance. They booed the pick and then booed Player Personnel Vice President Rick Spielman as he tried to explain it.

Suddenly, everybody’s an ‘expert’
Perception can be a dangerous thing on draft day, especially for folks with cocktails in their hands. The draft is another of those times where every Tom, Dick and Mel with a domain name purports to be an expert, and the cacophony makes it hard to distinguish the informed from the clueless. Vikings fans are passionate, and the perception that the Vikes “reached” for a quarterback, instead of taking the best available player, permeated the room.

Here’s the thing about draft prospects: Someone could say 19 great things about a player, but people — fans and writers as well as NFL execs — often obsess about the negatives. Injury-prone. Small hands. Parts his hair on the wrong side. That kind of stuff. Then it gets repeated to death, and soon that’s all anyone talks about.

With Ponder, the Vikings supposedly chose him earlier than the draftniks expected. Well, so what? All that means is the Vikings must pay him more. Unless Zygi Wilf shows up at your front door with a bucket for a contribution, what’s it to you?

Ponder is a smart kid who played in a system similar to that favored by new offensive coordinator Bill Musgrave. That suggests he can pick up things quickly enough to play as a rookie, provided the NFL labor situation resolves itself in time for training camp. Ponder can’t be any worse than the quarterbacks the Vikings have now, and if he’s any good at all, it makes the Vikings much more entertaining to watch this fall.

That is, of course, if there is NFL football this fall. The three-day draft was a welcome diversion from not only the legal wrangling between owners and players that threatens the season, but the abominable play of the Twins, who can’t throw strikes, execute a simple rundown or show even an ounce of passion while freefalling to the worst record in baseball. With at least three minor-leaguers in the lineup every night — and let’s not pretend any of them are prospects — it will take a miracle or some quick healing by Joe Mauer and Delmon Young to turn this around.

Some eclectic choices
Meanwhile, the Vikings finished up the draft Saturday by choosing an eclectic mix of character types and goofballs. With teams prohibited from signing pro or college free agents during the lockout, these might be the last new Vikings for months.

Fourth-round pick Christian Ballard, a defensive tackle from Iowa, plays cello and bass. His great-uncle is the late singer/songwriter Hank Ballard, who fronted The Midnighters and wrote and recorded “The Twist” before Chubby Checker covered it.

“He’ll be great at our rookie show in training camp, playing the cello,” Spielman said.

(Ballard must be a true musician; he reportedly tested positive for marijuana at the NFL Combine, which he declined to confirm.)

Center Brandon Fusco of Division II Slippery Rock, one of four sixth-round picks, did not play football until his junior year in high school. His explanation, via conference call, was hilarious. “I always watched it on TV,” he said, “and I sometimes got in a pissed-off mood, so I wanted to get on the field and take my frustrations out on people.” Fusco said he also works off frustration by golfing. Funny, that never works for me.
At least Fusco didn’t hear Spielman mangle his last name, then try to joke his way out of it with, “My Polish isn’t very good.” One problem: Fusco is an Italian surname.

Then there is safety Mistral Raymond, another sixth-rounder who walked on at South Florida to stay close to his family in Palmetto, Fla., about 45 miles away. In 2008, while Raymond attended Ellsworth Community College in Iowa, assailants attacked his family’s home with guns and Molotov cocktails, thinking it belonged to his cousin, who had killed someone in self-defense. The cousin actually lived next door. One of Raymond’s sisters was shot four times but survived. Four others in the burning house were unhurt, including Raymond’s disabled mother, who died six months later.

Three weeks ago, another of Raymond’s sisters was found dead in Bradenton, Fla., in a suspected homicide. Raymond was with his family Saturday when the Vikings drafted him.

“Having them see my name come across the screen and seeing the excitement that it brought them, I think it was a relief for all of us,” he said.

Labor drama complicates picture
This week, the U.S. Court of Appeals, Eighth Circuit, in St. Louis is expected to rule on the NFL’s request for a permanent stay of U.S. District Judge Susan Richard Nelson’s order ending the lockout. If the stay is granted, the lockout will continue while the NFL appeals Nelson’s order, which could take into June. The league and the players will also be back in Judge David Doty’s courtroom in Minneapolis on May 12, to determine damages from his decision that the NFL violated the collective bargaining agreement by negotiating TV contracts that paid the owners even if games weren’t played.

It might be the only football talk for a while.