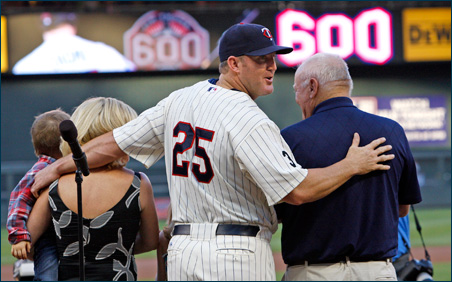 Jim Thome heard great things about Harmon Killebrew more than a decade before he met him. This is what happens when you play for a former Twin with a passion for storytelling.

Charlie Manuel managed Thome for parts of three seasons with Colorado Springs and Charlotte, Class AAA farm teams of the Cleveland Indians, from 1991 to 1993. Manuel and Thome both rose to the major-league club, Manuel as a hitting coach and eventually the manager.

Manuel, a teammate of Killebrew in Minnesota from 1969 through 1973, saw similar raw power and more in Thome, even though Thome batted left-handed and stood way taller at 6 foot 3.

“Charlie always used to make reference many times in the ’90s about Harmon Killebrew,” Thome said recently in the Twins clubhouse at Target Field. “If I would hit a high home run that seemed like it wasn’t going to come down, it just kept going, he’d say, Harmon hit a ball like that. Charlie referred to Harmon a countless number of times.

‘A gift’ to meet Harmon
“And when I finally got to meet Harmon, it’s almost like a gift was granted to you to meet a man like this. That’s how special he was.”

Thome finally met Killebrew at his first Twins spring training in 2010, and he cherished their conversations so much that Killebrew’s death from esophageal cancer on May 17 saddened him as if he lost a lifetime friend.

“He would have made it very special,” Thome said. “You know how they say people are givers? He was a giver, a giver of life.”

Thome especially noted Killebrew’s absence last Thursday, when the Twins celebrated the milestone in a pregame ceremony. Last year, when Thome hit his 574th home run to pass Killebrew on baseball’s career list, the Twins surprised Thome with a taped congratulatory message from Killebrew that was shown on the Target Field video board. 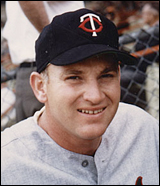 “I always explain it, if you ever sit down with your grandfather and have just a man-to-man talk, or a talk about life, or say you were talking about hitting, that would be your conversation with Killebrew,” Thome said. “What a special man.

“Harmon was very generous with his time. I think what made him a great man was, he had time for everybody. He would talk hitting, talk about life, anything you really wanted to talk about. Getting that opportunity in a short period of time, to get to know him and talk, to him, I consider myself very lucky.”

A special seat
While Thome couldn’t attend the Killebrew funeral in Arizona because he was rehabilitating a left oblique strain in Fort Myers, he eagerly agreed to participate in the May 26 Target Field memorial service. The Twins asked Thome to sit in the deepest seat in the ballpark — Section 334, Row 16, Seat 32 — to approximate the distance of the 520-foot home run Killebrew hit at Metropolitan Stadium in 1967.

It’s a hike getting there. Straight up from the 411 mark in center field and set back a ways, that seat is higher than the roof of the B Parking Ramp next door, and so far above the field that the prevailing wind swirls differently than the flags in right field indicate. Looking in at the diamond, the players appear to be scurrying miniatures. The steep stairs are a tough climb for a soon-to-be 41-year-old with a bad back.

“Not really thinking of anything, I go out there,” Thome said. “I’ll be honest — it’s a little bit eerie to be up there looking down, to imagine a ball going that far. I was taking my time as I walked down, for sure. It was very high, very high.”

Of course, almost two months later, Thome pounded his own tape-measure home run into the second deck in right field against the Royals, estimated at 464 feet by hittrackeronline.com. That’s the longest homer hit at Target Field. None of his teammates seems likely to challenge it.

It’s been a good ride here for Thome, who embraced Twins tradition and set a marvelous example for preparation and work ethic.

Even Sunday, with the Twins dead in the water, 15 games under .500 and facing a Yankees team that usually spanks them (which happened again, 3-0), an ebullient Thome walked around all morning with an infectious grin. At the indoor batting cage, Thome stretched near the glass window of the Champions Club and waved at a handful of early-arriving fans.

A few weeks ago, Danny Valencia and I struck up a conversation about the new ballpark the Florida Marlins are building in Miami. (Valencia grew up in South Florida, and I used to work there.)

Valencia said he attended Game 7 of the 1997 World Series, when the Marlins beat Thome’s Indians in 11 innings. That was the last time Thome appeared in the World Series and the closest he came to winning a world championship, the one achievement that has eluded him in his major-league career.

(This is why the Twins should do Thome a favor, trade him off this listing tugboat and reunite him with Manuel in Philadelphia by Aug. 31 so he’s eligible for postseason.)

As Valencia described the joy he felt as a Marlins fan that night, Thome wandered into the conversation. It never dawned on Valencia that his moment of happiness represented Thome’s biggest heartbreak, and he segued from memories of 1997 into this: “Jim, isn’t it great the Marlins are getting their own stadium?”

Egads. Why in the name of Earl Battey would Thome care?

Another player might have glared at Valencia, or said something mean and catty like, “You do realize my team lost that series, son, and the way you’re playing you probably won’t last long enough in the big leagues to get that close.”

Instead, Thome kept smiling and said sincerely, “I’m glad you were happy.”

I’m pretty sure Thome really was.