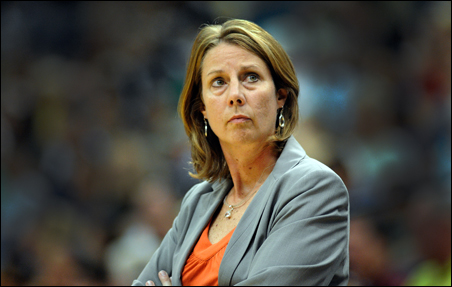 Related: Players to watch as Lynx ready for playoffs

The jacket came off in the second quarter. The exasperated look and eye-roll preceded a quick timeout in the fourth. Minnesota Lynx Coach Cheryl Reeve took a seat facing her players with 1:37 to play on Friday night and demanded something better than what she was seeing.

But the Lynx, with the best record in the WNBA, weren’t behind or in danger of losing. They rode the wave of the sellout crowd of 9,212 on Maya Moore Bobblehead Night, hammering San Antonio with an 18-1 fourth-quarter burst to blow open a close game at the Target Center. By the time Reeve called timeout, every starter except Seimone Augustus had come out, and the Lynx held a 12-point lead in a game they would win, 85-75.

But Reeve didn’t care. Her subs were stinking it up. At practice the day before, Reeve told her players to treat this game and Sunday’s rematch in San Antonio like a best-of-three playoff series, as the first two rounds of the WNBA playoffs will be.

Her starters — four WNBA All-Stars plus dependable veteran center Taj McWilliams-Franklin — had been superb, combining for 76 points. Her bench offered almost nothing. Reeve was thinking ahead, and didn’t like the vision.

“You need eight players in the playoffs,” she said. “As soon as we get the second group feeling good about what we were doing …”

An Air Force brat with South Jersey roots, Reeve is confident without being condescending, demanding without being obnoxious. And she gets results. At her urging, the offensive-minded Augustus stepped up her defense to become an unexpected stopper. Friday night, Augustus helped shut out Becky Hammon, recently named of one of the WNBA’s 15 all-time best players.

“She hasn’t talked about offense as much as she talks about defense,” Augustus said. “It’s been a change for all of us. She’s given all of us a challenge, and we all have to respond to it.”

Respected league-wide for her scouting and game-planning acumen, Reeve made sure the Lynx signed the 40-year-old McWilliams-Franklin, who played for her in Detroit. Better known as “Mama Taj,” McWilliams-Franklin stabilized their post defense and added leadership to the locker room. Reeve was on vacation in Australia on the first day of free agency when she called McWilliams-Franklin at 2 a.m. local time to recruit her to Minnesota.

“I’m not happy when we lose to her, but I’m happy for her,” said San Antonio Coach Dan Hughes, who hired Reeve as an assistant in Cleveland in 2003. “She paid a lot of dues.

“She’s got a team that’s got a lot of pieces. Cheryl’s gotten good players to play together, and there’s a real art to that.”

Lynx have real shot at championship
After years of ineptitude and stupidity, the Lynx are a WNBA force with a shot at the championship. The Lynx hired Reeve after failing to reach a contract agreement with interim coach Jen Gillom after the 2009 season, and her arrival is as much a reason for that as every key player acquisition since the drafting of Augustus in 2006. Gillom, hired in Los Angeles, was fired earlier this year. 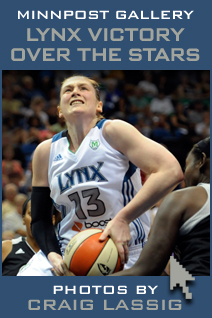 “When I got there, I said, ‘Hey, if anything happens here, Cheryl would be a really good candidate,” Laimbeer told MinnPost in a telephone interview last week. “After they made the coaching change, I made sure I was in [Griffith’s] office saying that this is the person you really should hire. He got kind of sick of me popping my head in.”

Said Griffith, semi-joking: “It’s hard to distinguish when Bill is being a pest and when he’s not. I think it’s one and the same.”

“I wouldn’t go back for a second or third time to make the point about somebody if I didn’t believe that that wasn’t the person for the job, bar none,” Laimbeer said.

Strong-willed coaches, too. Reeve, a former all-conference point guard at La Salle, held her ground on a Detroit staff with the 6-11 Laimbeer and the 6-10 assistant coach Rick Mahorn, rugged ex-Pistons with dominant personalities.

Laimbeer already coached the Shock to one WNBA title when Reeve interviewed for an assistant’s job just before Christmas in 2005. Reeve’s father, Larry, had just been diagnosed with a form of blood cancer. (He died two years ago.) After 17 years in coaching, the last five as a WNBA assistant in Charlotte and Cleveland, Reeve considered taking some time off.

“To be honest with you, I spent four years prior to that disliking Bill,” she said. “The thought of working for him … It’s kind of like when you develop that rivalry and then you have to go work for somebody. I just wasn’t sure if I was that into it.”

Reeve spent life standing up for herself
But Reeve, as a middle child with two brothers, spent most of her life standing up for herself. The family moved from Omaha, her birthplace, to Georgia before settling in southern New Jersey near Philadelphia. The kids rooted for the Vikings before the Eagles took hold of them. In pickup football games with her brothers, Reeve pretended to be Chuck Foreman. She moved on to Dallas wideout Golden Richards, because his hair stuck out of his helmet, as hers did.

“You know the old story — playing sports with your brothers, it toughens you up and all that good stuff,” she said. “I think I toughened them up a little, too. It was very much the whole tomboy thing. I just loved it. They didn’t have to ask; I was just with them, playing with their friends, throwing the football in the street, all that. I could get into stories where I beat up their friends if they picked on my brothers, that kind of thing. I was the one who stuck up for them.”

While watching Laimbeer and Mahorn rag each other and cut up in the interview process, Reeve sensed a confident vibe that suited her. 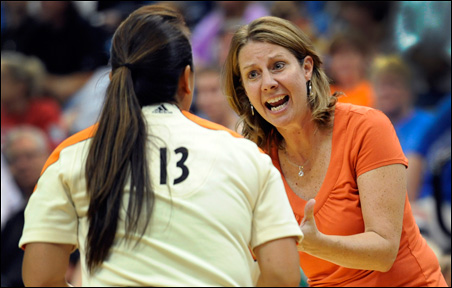 “Anybody that knows me knows I have strong opinions, and I have a strong personality and I don’t shy away from things,” she said. “What I liked is, you could be yourself. I could say actually what I was thinking without fear I would hurt somebody’s feelings, because my filter isn’t always on.”

Laimbeer liked that, too. “I wanted somebody you could argue with,” he said. “You respect her opinion. I may choose to go in a different direction, but at least if she’s arguing her convictions, she feels strongly about something.”

From Laimbeer, Reeve learned the importance of rebounding and made it one of her coaching mantras, along with defense. Injuries ravaged the Lynx in her first season, but this year’s team better reflects her style. The Lynx entered last weekend third in the 12-team WNBA in points allowed and field-goal percentage defense, while leading the league in rebounding margin. They have also forced more turnovers and shot significantly better from the field than a year ago.

“The core of who I am is, I’m a preparer,” Reeve said. “I studied for exams well ahead of time. I wasn’t a night-before-the-exam [crammer]. That made me feel a little off. And that just goes from upbringing. My parents were really good about ‘Get your homework done first.’ Those values have just carried with me through everything I do.

“I don’t want to get outcoached. Even as an assistant coach, when we got into game situations, I wanted to know exactly what their tendencies were, so we knew, when we got to that point, we have a timeout and say, this is what they’re going to run. It gives you such a great feeling to know you outworked somebody and put your players in that position. It’s just always worked for me.”

Now, it’s working for the Lynx, too.

“We finally got it right,” said Chris Wright, the president of the Timberwolves. “She’s got a team of great players, and she manages them beautifully.”

Related: Players to watch as Lynx ready for playoffs