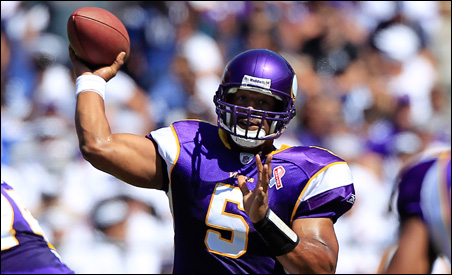 By the time the game was 15 seconds old, Percy Harvin had rocketed 103 yards with the opening kickoff, the Vikings led 7-0 and had decommissioned the San Diego field goal kicker for the rest of the day.

All on one play.

The prospects for a new Viking era resounded. They could now unleash the history’s highest paid running back, Adrian Peterson, the quadruple threat Percy, a new veteran quarterback who had seen it all in 13 years, and a new offensive system calculated to pool all of this largesse.

It wasn’t pretty. This is said more in sorrow than derision. The man is a warrior and will likely find his traction, possibly as early as Sunday when the Vikings return to their reassembled Metrodome to play Tampa Bay in the wake of their 24-17 loss in San Diego Sunday.

When it was over, McNabb made no attempt to conceal his chagrin.

“I’m embarrassed,” he said of his performance. “I thought we could control the game. It was frustrating to lose that way, knowing the players we have.”

But you had reason to suspect that Donovan’s day was headed for trying times when his first pass as a Viking was intercepted near the Viking goal line and converted into the tying touchdown three plays later. At the end it was 24-17 for San Diego, but for a long time a serious question was how either team could figure out a way to win.

How the Vikings managed to lead until the fourth quarter was even more improbable.

The daffiest sidelight in all of this mess was that the Vikings somehow led for most of the game. More, for a sizeable stretch in the first half they seemed to have the game in hand. Harvin shook the stadium when he grabbed the opening kickoff and — you’re tempted to say “almost predictably” — sprinted 103 yards to score. The Chargers’ kickoff man and field goal kicker got caught up in the traffic trying to make a tackle, injured himself and was through for the day. Conscripted to replace him, the Chargers’ punter, Mike Scifres, kicked all of the extra points thereafter and added a critical 40-yard field goal to tie the score in the four quarter with the game hanging in the balance.

McNabb’s miseries began early. Shortly after Harvin’s coast-to-coast kickoff return, the Vikings found themselves pinned near their goal and McNabb tried for some breathing room with a pass to the flank. The Chargers’ Shaun Phillips intercepted and fullback Mike Tolbert scored the first of his three touchdowns to tie the score. But the Vikings paired Harvin with Adrian Peterson in the backfield and harvested a Ryan Longwell field goal with 20-yard scramble by McNabb himself for a 10-7 lead and then…

Enter Adrian Peterson of the new $56 million contract and eager to celebrate. He did it with a 46-yard run that was the “all-in, all-the-time” Adrian that had established him as the best running back in football. And a few moments later McNabb hit Michael Jenkins with a three-yard touchdown pass, and it was 17-7 for the Vikings at halftime.

The game looked eminently winnable. But here Philip Rivers intervened, the quarterback generally ranked as the equal or virtual equal of Tom Brady, Peyton Manning (when healthy) and Drew Brees among the peerage of National Football League quarterbacks. His 37-yard strike to Ryan Mathews propelled a drive that ended with Tolbert breaking tackles left and right and barging into the end zone from seven yards out to trim the Viking lead to 17-14. A few minutes later Scifres, the punter who morphed into a field kicker, tied the score at 17-17 and from there it was back to Rivers with a 19-yard touchdown pass from Philips and a 24-17 lead that stood up in the final minutes.

Among the more disconsolate in the Viking locker room afterwards was Jared Allen, the gung-ho pass rusher who stormed through the game as a genuine all-purpose menace, dropping off into pass defense several times and intercepting a pass with the game still in balance.

He declined all accolades when it was over.

Effusive talk
But not quite. There was room enough for some of those compliments. Peterson gave it a run. There weren’t going to be any 196-yard games of the kind that set an NFL record against the Chargers five years ago. The Chargers remembered. They didn’t care for Adrian’s effusive talk about exceeding that somewhere down the line in his interviews during the week, although none of those did any predicting. Still, the Chargers were ready for him, more or less, limiting Peterson to 98 yards this time.

And there were the linebacking Henderson battling in the secondary, and Brian Robison delivering on the flank and almost matching Allen’s performance.

But Donovan will have to do it another day. On this day the coaching staff experimented with Joe Webb in the wildcat formation — call that a dud — and a few other schemes. Nothing created any sudden sensation.

In the end, in view of the solemnity of the 9/ll commemoration that stirred the nation, it was just another football game. For the Vikings, it was one that ought to be quickly forgotten.