The president spoke Thursday of a nation in crisis with millions of dispossessed American workers desperate for jobs. Simultaneously the country’s security chiefs warned of a possible new terrorist strike against New York or Washington.

But suddenly for hordes of television watchers from ocean to ocean, all of that dire business became an ironic undercard to the sight of millionaire football players joyously and expensively hammering each other in Green Bay.

Why should anybody be amazed? Pro football, now the unchallenged godhead of life in America for millions of people from September to Groundhog Day, is back after its lockout turmoil that everybody understood would end about the time the TV contracts fell into jeopardy. It brings back all of its bluster and flyovers. It brings its endless perversion of the national anthem and its unshakeable hold on the masses who can’t get enough of it.

Television — switching deftly from Barack Obama throwing down the gauntlet in Washington to Aaron Rodgers and Drew Brees dueling down to the final tick of the clock on the goal line in Green Bay — explained it.

Pro football = TV theater
Pro football is the perfect theater for television. It gives you violent men whaling each other, competing swifties running from end zone to end zone. Here is New Orleans, practically blown out of the game in the first 10 minutes, retooling and mounting a last-minute charge that could have tied the game with its final breath. But Green Bay is the champion, and it told everybody why on the goal line.

So now come the Minnesota Vikings, heading for their opening game against San Diego Sunday. After the traumas of a year ago, are these people truly relevant, with their new quarterback, their retooled coaching staff and the ownership’s testy insistence that time’s running out for a new stadium?

They finished last season winning three of their last six games despite the abdication of Brett Favre, playing under a new coach and without a roof over their heads. The roof is back. So is the new coach and so is Adrian Peterson, about to reach the apex of his career, the only non-quarterback in pro football capable of taking personal control of a game. 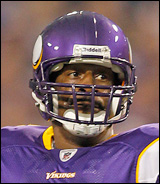 What’s new, primarily, is Donovan McNabb at quarterback. A few plays in an exhibition game were hardly enough for the Viking crowd to make any judgments on Donovan McNabb. His years in Philadelphia put him in the upper tiers of NFL quarterbacking as a conference champion five times, and lifted him once into the Super Bowl. He clearly has been accepted by Viking teammates and, without being heavy handed about it, has worked at building a comfortable relationship with his new teammates.

What adds to his credibility is his success in surviving the Philadelphia crowds for 11 years without requiring professional therapy. The furies and original savagery of sports crowds in Philadelphia has been compared with the Roman Coliseum under the reign of Caligula.

It reached epic levels on the December day in 1968 when the Vikings played the Eagles at old Franklin Field when the thousands of Eagle fans, alienated by the dismal performance of their football team, booed Santa Claus as he was bounding up the field in full costume trying to make a jolly appearance as the centerpiece of the halftime show. Wounded by this uncharitable behavior, the Santa Claus tried to warn the fans that they were risking no presents under the tree with that kind of behavior, waving his index finger in the air to caution them to be more respectful.

The fans misunderstood the purpose of the upraised finger and booed even harder.

McNabb a proven survivor
So the new quarterback is a survivor. But while McNabb gives the Vikings a comfort level at quarterback that it has not had since Brett Favre was still healthy in his final season, he is not likely to be the best quarterback on the field Sunday.

If you watched Aaron Rodgers and Drew Brees duel at the highest level of quarterbacking in the NFL Thursday night, it will be no comfort to know that Philip Rivers of San Diego has played at the same level for years, and his presence alone will make San Diego a favorite, especially with the all-pro Antonio Gates, the best pass-catching tight end in the league, as a prime target near the goal line.

Nobody has adequately explained the Chargers’ gruesome record of playing its worst football in the first month of the season. Most of the suspicion has been directed at the preparation agendas of Norv Turner, the Charger coach. But the team usually breaks out of it in time to reach the playoffs, a goal that today seems distant for the Vikings themselves.

What they bring that nobody in the league can quite match, however, is the manic will and drive of Adrian Peterson to reach the end zone on every play, first revealed in his rookie season five years ago when he broke the National Football League record by gaining 296 yards in a game against — who else? — San Diego.

Leslie Frazier, his coach today, remembers the game with an amazement that is still fresh:

The way he exploded … It was mind-boggling that he could raise the level of play to the degree that he did. The long runs, hitting the holes as crisp as he did. What I remember is what he amassed in the second half. He just took over the game much like what you see basketball players do when they get on a roll, and no matter what you do, you can’t stop him. He was the same way every time he touched the ball. You almost felt like something good was going to happen.”

And it did almost every time. This is a running back now in his prime and at the height of his earning power, as the Vikings undoubtedly will discover when his contract comes up for renewal next year. The Titans’ Chris Johnson set the bar a few weeks ago at $56 million. Peterson doesn’t talk contract. But a few months ago, a credible poll of pro football experts listed the 100 best players in the game. Tom Brady of New England was first, Peyton Manning of Indianapolis was second. Adrian Peterson was third.

In San Diego, the Chargers don’t have a whole lot of doubt of it. Most of them can remember 296 yards.

Season’s prospects
Are the Vikings ready to compete big time? Most of the game’s experts rate them two-thirds of the way down, in the range of 20th in the league, behind all of the others in their North division, Green Bay, Chicago and Detroit.

McNabb should provide stability at quarterback, and their offensive line is adequate. Peterson on certain days can win a game with his unyielding drive and intensity. Their wide receivers, headed by Percy Harvin and Bernard Berrian, are adequate, but they need another. Their tight ends can be strong with Visanthe Shiancoe and rookie Kyle Rudolph. The once-overpowering defensive line looks now to be merely adequate and will need Jared Allen to regain his pass rush of two years ago.

But the team looks reasonably competitive going in. Frazier is a settling influence, respected by the players, a man of values but also tough enough to take one look at the bloated lineman Bryant McKinnie on the first day of practice and tell him he was gone.

Which was a pretty dramatic announcement that the ship just got tighter.