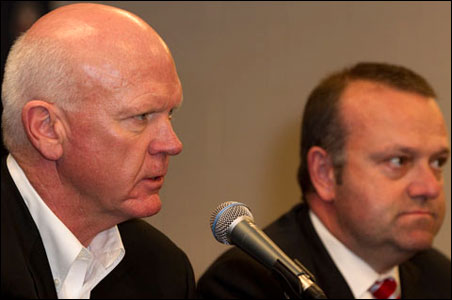 Five weeks ago, Twins owner Jim Pohlad gave Bill Smith a public vote of confidence, making it very clear that he’d remain the general manager following a 99-loss season because “he’s had a very tough situation” and “we’re not a knee-jerk organization.”

Apparently something major changed between then and now, as the Twins on Monday fired Smith after four years and two months on the job, repeatedly citing “philosophical differences” that they refused to discuss.

To replace Smith, the Twins turned back the clock, with longtime general manager Terry Ryan returning to the job on an interim basis after serving as an adviser to the front office since his resignation, and Ryan’s former right-hand man, Wayne Krivsky, returning to his old assistant role after leaving the organization in 2006 to take over as the Reds’ general manager. They’re getting the band back together, for a while at least.

Ryan stepped down as GM on Sept. 14, 2007, citing burnout after 13 years at the helm, and in returning to the job at age 58, he expressed uncertainty about whether it would be “for one year or ten years.”

Clearly the Twins weren’t expecting to fire Smith until very recently, and Ryan seemingly indicated that he was stepping back into the job as much out of his feeling of responsibility to the organization as his desire to actually be the GM again.

Ryan left Smith in a difficult spot in 2007, with Torii Hunter leaving as a free agent and Johan Santana on the trade block. Similarly, injuries wrecking the entire roster this year made many of Smith’s decisions moot, good or bad.

However, that doesn’t excuse the series of bad moves Smith orchestrated, from getting little in return for Santana and trading Matt Garza and Jason Bartlett for Delmon Young to dealing Wilson Ramos for Matt Capps and dumping J.J. Hardy.

Smith also made a number of shrewd trades and signings, but for the most part, they were on a small scale. Jim Thome and Orlando Hudson were smart, cheap free agent pickups, trades for Carl Pavano and Jon Rauch worked out well, and the original deal to acquire Hardy from the Brewers was an excellent one even if it involved admitting that Carlos Gomez was a bust as a centerpiece of the Santana blockbuster.

Smith did reasonably well at the margins but failed on the franchise-altering moves, and that’s not a recipe for long-term success. By contrast, Ryan thrived with big-picture moves like adding star-caliber building blocks outside of free agency and squeezing unseen value out of veteran-for-prospect trades but struggled with small stuff like surrounding those building blocks with washed-up veterans.

Eventually we’ll learn more about the “philosophical differences” that led to Smith’s firing, and based on the odd timing, those details are probably pretty damn interesting, but ultimately it comes down to the fact that he performed poorly and the more successful person he replaced was available and willing to resume the job.

This is a crucial offseason, for 2012 and beyond, and you’ll be hard-pressed to find anyone who doesn’t trust Ryan more than Smith.

None of which is to say Ryan has an easy task ahead of him. For one thing, he revealed during Monday’s press conference that the Twins’ payroll will decline in 2012, saying it will likely be “somewhere around $100 million.” If true, that would represent a $15 million drop and leave little room to re-sign Michael Cuddyer, Jason Kubel, and Joe Nathan, let alone add other free agents. Based on the current roster, they already have about $82 million committed for 2012.

Beyond that, Smith was hardly the only person involved in the Twins’ decision-making during the past four years. Ryan was an adviser during Smith’s various poor moves, assistant general manager Rob Antony and vice president of player personnel Mike Radcliff remain in the same roles, and even Krivsky comes with a mixed track record in Minnesota and Cincinnati. Smith took the fall because he was sitting in the biggest chair, but his departure alone fixes nothing.

Smith was a relative unknown when he took over for Ryan in 2007 and proved overmatched, making large-scale blunders that vastly outweighed his small-scale successes while seemingly epitomizing the Peter Principle.

That doesn’t make him a bad person or even an incompetent employee. It just means he was a poor fit as the GM of a major-league team. Ryan may not be able to climb out of this hole either, but I certainly feel more optimistic handing him the rope.