Two things to take away from the Bill Smith’s firing by the Minnesota Twins on Monday: 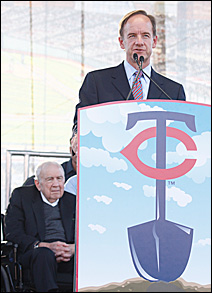 Courtesy of the Minnesota Twins
Carl, left, and Jim Pohlad (2007)

• The Pohlad boys will be taking a much more hands-on interest in baseball operations than their father, Carl, ever did.

• Being a Terry Ryan protégé or friend won’t save you if the Pohlads no longer trust your judgment.

That’s what made Monday’s announcement so stunning. It’s not that Smith hadn’t done enough to get fired.

In a lot of cities east of here, the botched trades alone would have been plenty — Jason Bartlett and Matt Garza for Delmon Young, who had one productive season; Johan Santana for four players, only one of whom (Carlos Gomez) was even moderately productive; dumping J.J. Hardy after one year, only to have him excel in Baltimore; then committing more than $14 million to bid for and sign Japanese free agent Tsuyoshi Nishioka, who too often resembled an overmatched college kid instead of an everyday major-leaguer.

Not the firing kind
The thing is, the Twins just don’t fire people.

The franchise has had five general managers since moving to Minnesota 50 years ago, and had never fired one until Monday. (It helped that owner Calvin Griffith served as GM from the team’s arrival in 1961 until he sold the team to Pohlad in 1984.) They haven’t whacked a manager since 1986, when Tom Kelly replaced Ray Miller. Since Ron Gardenhire took over managing for Kelly in 2002, only one coach has been replaced — Al Newman, after the 2005 season — though the Twins never called it a firing.

As recently as September, owner Jim Pohlad said that Smith and manager Ron Gardenhire would both be back. No form of the word “fire” appeared on the Twins’ statement announcing Smith’s departure, and none of the Twins officials at Monday’s press conference used the term, either, but that’s what this was.

That the Twins even offered a generic reason — “philosophical differences” over what the team should do to recover from last season’s 99-loss debacle — is more than they usually do. The Pohlads had certain ideas about organizational fixes. Smith disagreed, and said so.

“If you’re not on the same page as your owner, you might be delaying the inevitable,” Twins President Dave St. Peter said.

Different culture for team
“The culture of the franchise has changed dramatically the last three years. We’re not The Little Engine That Could anymore. Our division has gotten a lot tougher. There were some things that we all thought needed to be addressed, and there were some differences of opinions on some others. We felt that a change at the leadership role was in our best interests.”

That signals another change, too. For most of his ownership tenure, Carl Pohlad let baseball people make baseball decisions and rarely meddled. He signed off on the big stuff, of course, but never imposed his will in Steinbrenner-esque fashion on the day-to-day decision-making. Two years after their father’s death, the Pohlad sons — mainly Jim, with some input from the other two — apparently will not sit back idly if their concerns aren’t satisfactorily addressed.

“Basically it was about scope and approach,” Jim Pohlad said. “It doesn’t matter who was on which side of that. That’s what it came down to. We’ll never know who was right and who was wrong, but we just felt we weren’t on the same page.”

Is there a connection between the timing of this, and Wayne Krivsky’s return to the organization as a professional scout and assistant to the general manager? No, because Smith wanted him back.

Neither Smith nor assistant general manager Rob Antony is a talent evaluator, although a GM doesn’t need to be.  Theo Epstein isn’t, and neither is Brian Cashman. The Twins badly needed another trusted set of scouting eyes besides Ryan and player personnel director Mike Radcliffe. (Antony will remain in his role negotiating contracts, Ryan said.)

Smith decision-making biggest issue
More likely, the ultimate issue was Smith’s decision-making. The Twins’ pro scouts, the ones who recommended acquiring Orlando Cabrera, Carl Pavano, Jon Rauch, Matt Capps and Brian Fuentes the last few years, didn’t suddenly turn stupid. That Ryan did not advocate wholesale changes in the scouting department suggests the problem isn’t with the information and intelligence collected, but the analysis and choices made, which falls to the general manager.

In and out of the Twins organization, Ryan commands respect for his judgment and savvy. Smith never carried that kind of gravitas, even in his own clubhouse, despite assembling a roster that won two A.L. Central titles and lost a third in a tiebreaker. This wasn’t an easy day for Ryan, the GM from 1994 to 2007 who recommended Smith to succeed him.

“If we had won 94 games, I wouldn’t be sitting here,” said Ryan, who will carry the “interim” tag until he decides whether to take the job permanently.

“I didn’t want Bill Smith’s job. He knows it, and it just happened. I don’t like the way it happened. Unfortunately, here we are. I’m willing to take this on, and I think I can do the job for this organization. I certainly have enough experience. I’m much more prepared to take this job right now than I was in ’94.”

Said St. Peter: “Bill had made it known that if anybody was going to be in that chair, that it would ease the pain a bit if it was Terry, because of that respect. I think Terry had Bill’s blessing to take on that role. I respected that and I understood it.

“I get the sense Terry’s time away from the game has given him some greater perspective on some things he could do differently, but also gave him an incremental hunger to get in. He certainly feels a sense of responsibility, in terms of where the franchise is today, and ultimately where he thinks, Jim Pohlad thinks and I think it should be headed. It wasn’t that difficult a talk for him.”

Often when someone is fired, and the organization won’t say why, you can connect some dots by listening closely to what the new guy plans to do. Ryan said he and Smith already agreed to evaluate the training and medical staffs, to learn why it took some players at all levels longer than they should to return from injuries. (If you’re reading “Joe Mauer” into this, fine, but it’s more than just him.)

Smith was notoriously paranoid about leaks and guarded information so tightly, particularly about injuries, that Gardenhire and the coaches occasionally found themselves out of the loop. Improving communication among all departments will be a goal of Ryan’s, and Ryan even threw reporters a bone Monday by estimating the Twins’ 2012 payroll at $100 million, a $13 million drop from last year. St. Peter never reveals specifics like that, and joked that he tried to kick Ryan under the table for saying it.

“I told somebody earlier today, this will be in my opinion the most seamless transition in the history of baseball,” St. Peter said. “That’s what I expect. I don’t expect any egos to get in the way. This isn’t going to be territorial. It isn’t going to be about who’s getting credit for what. We’re all in this together. I think that’s one message Terry is going to bring, loud and clear.”

Ryan’s task is enormous. The Twins need to improve their defense, pitching and hitting without much immediate help from the farm system. With almost $66 million already committed to existing contracts — $46 million alone among Mauer, Justin Morneau and Carl Pavano — Ryan will need some luck and creativity.

He may not be able to lure back any of his four free agents (Michael Cuddyer, Joe Nathan, Jason Kubel and Capps). He needs to find a shortstop, some relief pitchers, a backup catcher who isn’t an automatic out, and a first baseman in case Morneau can’t play every day anymore. Ryan will work with a much bigger payroll than Carl ever gave him (the high: about $71 million his final year), and it will be fascinating to watch how he manages it.

Funny thing: When Ryan changed roles four years ago, Pohlad said the Twins front office might be stronger with Ryan in the field scouting instead of stuck behind a desk. We all know now how that worked out.