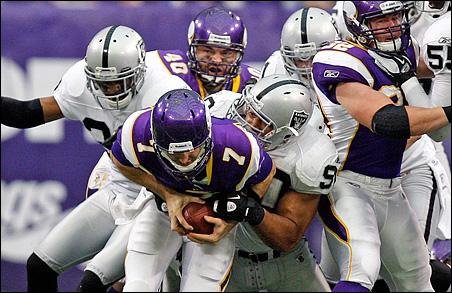 It was your basic horror show, combining self-destruction with a public mugging.

When it was over, Vikings rookie Christian Ponder pleaded mea culpa for throwing three interceptions and losing the game. The Oakland Raiders, meanwhile, happily relived the days when the Raiders were the goon squad of pro football, drawing enough penalties and personal fouls to qualify for the Hennepin County police blotter.

It took the Vikings two quarters to remember that they were supposed to be playing a competitive sport.

But there was a final irony. The Vikings might have been the better team at the finish.This, despite (A) the sight of their best player, Adrian Peterson, standing motionless on the sideline with a sprained ankle that knocked him out of the game in the first half after he’d given the Vikings the early lead and (B) the unsympathetic scoreboard showing 27-21 for Oakland at the end.

And that’s just the beginning of the alphabet. If you were grading the Vikings for production when it counted, give them a Z, for zilch.

Raiders return to ‘wildlife days’
Somewhere the ghost of the Raiders’ founder and chief zookeeper, the late Al Davis, had to be applauding. The present-day Raiders are the nominal descendents of the Oakland teams of the 1970s that beat the Vikings in the 1977 Super Bowl. The Raiders then were generally considered the only wildlife refuge in America operating as a franchise in the NFL.

The Raiders of Sunday at the Metrodome offered no cornerback nicknamed Doctor Death or The Man from Mars (the Neanderthalish Otis Sistrunk). But the Raiders of Sunday did bring enough odd behavior to dumb-down the officials, who lost track of the number of downs during one sequence in the game and had to be rescued by the Vikings’ players and coaches.

But it was enough to keep the Raiders in first place in the AFC West while the Vikings sank into their darkest oblivion in decades, a record of two wins and eight losses after the first 10 games. Add the deepening embarrassment of last place in their division standings that now show all of their neighboring rivals, Green Bay, Chicago and Detroit in the running for the playoffs.

Someplace in the midst of the expanding mess, the Vikings’ brainy punter and Renaissance man, Chris Kluwe, got infected by it and flubbed a snap from center, costing the Vikes a field goal that might have meant the difference.

It was close enough at the finish. The Viking defense toughened behind Jared Allen, Kevin Williams, E.J Henderson and Chad Greenway in the second half. The Vikings gave up only a field goal in the last two quarters after trailing 24-7 and went right to the edge with touchdown passes from Ponder to Percy Harvin and Kyle Rudolph.

But at the finish, it was a lot more painful for Ponder than his formal debut three weeks ago. The game formally introduced him to real life as a quarterback in pro football — his interceptions, faulty decisions and the five sacks he took. It showed in his apologies after the game. Yet even then, his acceptance of responsibility was straightforward and avoided any theatric mea culpas. But . . .

Ponder’s mea culpas
“Lot of mistakes by me … the defense played unbelievably well … I can’t make mistakes and turn the ball over … I’ve got to learn to do a better job of putting the team in position to win … I know I shouldn’t throw across my body … forcing the throw … I tried to make plays that [turned out to] cost us … I have to put the team first and not feel sorry for myself … Toby Gerhart did a great job of stepping in when Adrian got hurt.

But again … “I can’t force things that aren’t there.”

Actually, Ponder’s best game was his scrambling, which kept the offense going (71 yards in five carries) and ended up outgaining the combined output of Peterson, Percy Harvin and Gerhart.

And yet after Sebastian Janikowski’s field goal made it 27-7 in the second half, Ponder connected with Harvin for 26 yards and Kyle Rudolph from the one to reduce the Oakland lead to 27-21.

They got no further. When you’re losing, the bizarre becomes the normalcy. There was Kluwe’s muff. Nobody in the league is much more reliable in his craft (punting and holding the ball for place kickers)..

But Peterson’s loss was the crucial. It relieved the Oakland strategy of stacking the defensive boxes to keep him in the ball park. Gerhart’s rushes and Harvin’s multi-dimensional threat were some compensation, but nobody terrorizes defenses like Adrian Peterson in the lopsided attention he demands.. He powered the Vikings’ first touchdown drive and opened the scoring from 12 yards out — after which the Vikings were blanked until the fourth quarter while Oakland built its 27-7 lead on a 27-yard field goal, Carson Palmer’s 11-yard touchdown pass to Chaz Schilens, a 2-yard run by the blockbuster running back Michael Bush at the end of a second-quarter drive and Palmer’s one-yard plunge near the end of the half.

Basically, that was the Raider offense for the day. The Raiders spent most of the rest of the game producing dumb penalties and hanging on. Those penalties got to be a running circus in the second half. For the game, the Raiders rang up 117 penalty yards on 12 calls. Four of those were for illegal hits.

In the midst of it, the crowd was silenced when Oakland receiver Darrius Heyward-Bey was injured and left motionless when he was inadvertently struck in the back of the head in a tackle by Henderson. He was carted from the field but later was cleared of any critical injury.

Another Sunday, another somber coach
The loss was not only damaging to the Vikings’ now-forlorn struggle for respectability. It further complicated the ownership’s expensive campaign to convince the public their pro football team deserves hundreds of millions from taxpayers to finance their new football stadium. It also cost Leslie Frazier in his struggle for credibility as the coach to lead a Viking revival.

He was somber afterward, again. “I really feel like we were coming up and having some success,” he said after the game. “We needed to have our best game as a team, and we didn’t. I thought playing at home we had a good chance to win. We were playing the best team in the AFC West and had a chance to win … It wasn’t a lack of effort. I have to take full responsibility. At the end of the day, a lot of things had to go right.”

Including making some use out of 117 yards’ worth of penalties. Including not fumbling the ball on kickoff, which happened to Lorenzo Booker.

But there is another Sunday — this one against one of the better teams in the National Football Conference. In Atlanta. And there is a silver lining.

There are only five more after that, including Denver and Tim Tebow, the cult- figure quarterback who is creating serious identity problems for millions of pro football purists.

In Minnesota, the season may be a washout, but at least it’s getting shorter.