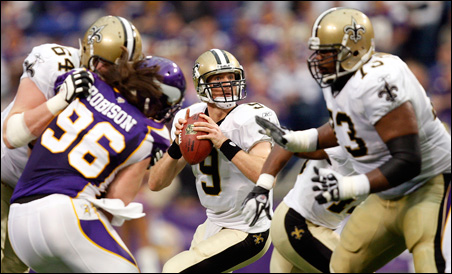 REUTERS/Eric Miller
Drew Brees attempting to pass during the first half of Sunday’s game.

When it was over Sunday, the fledgling quarterback of the Minnesota Vikings shook hands with the winning quarterback and, for the first time came, face to face with the awesome gulf that lies between them — and their football teams.

The game was not billed as a master class in the art and tenacity of prime-time quarterbacking in the National Football League, but it became that soon enough.

Before it was over, Drew Brees had thrown five touchdown passes in a 42-20 rout of the Vikings, and the New Orleans Saints may have vaulted past the Green Bay Packers as the likely favorite to win the Super Bowl for the second time in three years.

Most miserable Vikes season ever?
He also put the misery-stricken Vikings in the position of having to win their last two games — in Washington on Christmas Eve and against the Chicago Bears on Jan. 1 in Minneapolis — to avoid the ignominy of officially becoming the worst team in 50 years of Viking history, at least arithmetically.

They now stand with 2 victories and 12 losses. No other Viking team has won fewer than three.

Brees and New Orleans, on the other hand, now threaten to scramble all prior arrangements of the NFL elite heading toward the playoffs in January. With his 412 yards Sunday and two games remaining, Brees is now just a little more than 300 yards from breaking Dan Marino’s once-unapproachable 5,084 yards in passing for a full season, meaning he needs to average a few yards over 150 in his final two games. He can do that, and often does, in less than a half.

With the Packers suddenly looking very mortal and Aaron Rodgers oddly vulnerable in their first loss of the season Sunday, the road to a Super Bowl title is now getting congested.

For the Vikings Sunday — and particularly for Christian Ponder, the young first-round draft choice from Florida State — there was no solace for the embarrassment of an ugly season. It didn’t take long Sunday for the restless crowd to begin demanding another look at the multiple skills of Joe Webb, the athletic football orphan who has yet to find a home in the Viking offense.

On the Viking sideline, coach Leslie Frazier was certainly aware of the chants behind him. In fact, for a few pained minutes it looked as though the coach, in his somber intensity, might need a therapist more than another quarterback.

Ponder has been the quarterback for the last six weeks, a period when the team has logged one victory and a growing sense of bewilderment. Ponder’s development showed strong early promise but has been checked by a hip injury. But his troubles have mounted mostly because the NFL is often a nightmare for on-the-job trainees. He was pressing from the start Sunday, conscious of interceptions, protecting the ball.

Frazier loyal to Ponder
But Frazier prizes both loyalty to a principle and the evidence of his eyesight. He said two months ago that young Ponder was going to his quarterback after Donovan McNabb was released and that he was probably going to be the Viking quarterback for years after.

He may yet. But Frazier made that commitment publicly. Whether events since then affect his job status for 2012 — which is doubtful but may be under review — Frazier clearly is going to stick with his decision as the only proven way to develop a young quarterback in the debris of a losing season.

There’s always an outside chance that a coach with 20 years of experience in the NFL, and the wearer of a Super Bowl ring, knows more about Ponder’s potential than the Fantasy Football scholars who want Joe Webb to take over to break the monotony.

The game was lost. Why not go with Joe Webb while the score was rolling up, somebody asked in the post-game interviews.

Frazier was polite but unmoved. When he’s analyzing a defeat, the coach is invariably earnest, quiet and reasonable. If it’s really a lousy Viking performance, he sometimes sounds funereal, so much so that you might swear you can hear the sounds of a distant organ.

“I wanted to see how he [Ponder] would react to situations,” he said.

It does make sense. The unspoken response from the coach was: He’s our quarterback. We told him he was, he’s a player and we’re sticking with him.

Because Ponder is a young player of genuine promise, there really is no retreat from the strategy to which Frazier and evidently the Viking organization have committed themselves. Probably with good reason. The Vikings are losing because the parts basically are coming unhinged.

New Orleans strategy, Brees a potent combination
Brees was great Sunday, but he was throwing against a secondary depleted by age, mediocrity, bad personnel choices and bad off-field conduct. The rest of the team is handicapped by the age of some of its former dependables. The contributions of it best player, Adrian Peterson, have been virtually nil this season. Teams massed against him early without an effective response from the Viking passing game. He got hurt later, and he was a non-factor Sunday with his 60 yards in 10 attempts, a strong average but not the real Adrian Peterson.

The New Orleans’ strategy Sunday was to avoid being beaten by the All Pro running back at all costs, which is an excellent strategy when the Vikings have no serious downfield receiving threat beside Percy Harvin. So the Saints paid special attention to Harvin, limiting him to three catches for eight yards while Ponder searched in vain for other open receivers while dodging the Saints’ rush and worrying about interceptions.

But it was hardly a rout through half of the action. Ryan Longwell’s two field goals offset Brees’ short touchdown pass to Lance Moore, Brees hit again to Jimmy Graham from a yard out, and Toby Gerhart cut the Saints’ lead to 14-13 on a 10-yard pass from Ponder. Then, Brees connected again from 13 yards to Darren Sproles to stretch the New Orleans lead to 21-13 at halftime. Brees was unstoppable after that, and the Saints offensive line neutralized the pass rushing of Jared Allen and Brian Robison.

Brees threw touchdown passes of 2 and 47 yards to John Gilmore and Moore again, Pierre Thomas on the ground rolled up the score, making it 42-13 before the Vikings got a consolation touchdown on Ponder’s pass to Toby Gerhart for 16 yards late in the game.

As the rout expanded and the Saints eventually piled up 573 yards, it was impossible to avoid comparing the fortunes of the two teams since the day not much more than two years ago when they met for the National Football Conference title in New Orleans, for the right to go to the Super Bowl.

Then, it was Brees vs. Brett Favre, Adrian Peterson against the manic defensive line and linebackers of the Saints’ defense. It was almost a perfect match. And it was gut-tearing football. The Viking bench and Favre both made tactical mistakes in overtime, and the Saints went on to win the Super Bowl.

In the two years that followed, the Vikings went south. But — with Green Bay losing its first game Sunday, and nobody else looking anywhere close to invincible — the New Orleans Saints emerge as a logical December favorite, or not far from that.

The Vikings two years later? Not so much.

Mostly, it was Brees two years ago, and it is still Brees. Aaron Rodgers was surprisingly mediocre against Kansas City Sunday. New England was troubled early by Denver but did reveal some of the vulnerabilities that Tim Tebow’s critics have been railing about. Beyond that, there are Pittsburgh and Baltimore and maybe even Atlanta. This is a cannibal league. There are no super-elite teams left in the NFL.

But for the last three years, nobody has been as consistently electrifying with the football in his hands than Drew Brees. And to think that this guy, when he played for Purdue, actually threw passes against the Minnesota Gophers.

Thank God he was allowed to graduate.