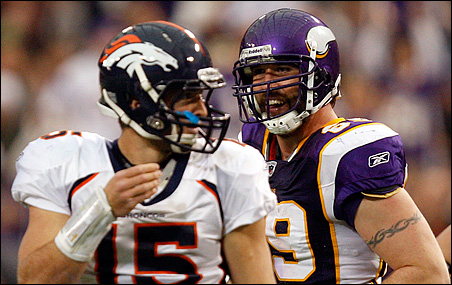 For two months the old guard of the pro football establishment sneered at Tim Tebow as an imposter at best and an aberration at worst. The management of his own team silently seemed to concur. Tebow playing quarterback in the NFL defied the rules of nature. It took him forever to get rid of the ball. People could get hurt.

They did Sunday at the Metrodome, and they were wearing purple.

Tebow, the alleged misfit playing in a college style option offense to maximize his running and to minimize his passing, threw — of all things — two touchdown passes in the second half, and scored himself on a two-point conversion to tie the game late. Disorganized by then, the Vikings yielded two field goals to Denver’s Matt Prater in the final two minutes. The last one was preceded by the second interception thrown by Christian Ponder and went 23 yards on the final stroke of the clock for a 35-32 victory.

Remarkably, it propelled Denver into the middle of the playoff hunt in the AFC West with its fifth straight victory, all of it stirred by the Tebow, while the Vikings sank into the oblivion of 10 losses in 12 games.

It was a dismal finish, the kind, Coach Leslie Frazier said later, professional athletes should be able to avoid. The Vikings blew another halftime lead in a quirky football game that turned into the first trauma in Ponder’s brief and promising career of Christian Ponder as the Vikings’ rookie quarterback.

Late in the game he found himself locked in a shootout with Tebow, whose college career paralleled his own in Florida.

Advantage Tebow. Never mind smirking at his upward gazes to heaven after his touchdowns.  Tebow put the team on his back six weeks ago and Sunday carried it into the thick of the playoff hunt and first place in the Broncos’ division.

Injured hip
Limping with an injured hip, Ponder struggled throughout the game despite his 360 yards passing. Beside his two critical interceptions he also lost a fumble, all of that during what turned out to be pivotal parts of the game. They rubbed out a genuine hard-bark effort by a Viking team trying to play its way out of misery behind the hack-and- hammer running of Toby Gerhart and the open field bravura, again, of Percy Harvin.

The presence of an ailing Adrian Peterson obviously would have helped. But in the end it was Tebow, rallying his team after a horrendous first half in which Denver made four first downs to 15 for the Vikings. The Broncos were in the game only because Ponder misjudged the coverage and put the ball early into the hands of Denver’s Mario Haggan, who romped 16 yards into the end zone. After that the Vikings squandered their huge territorial advantage and led only 15-7 at the half.

The rest of it, including the a bizarre finish, might have been the game in which Tebow finally buried the skepticism that his quarterbacking style had generated and finally routed his critics.

The rap on Tebow among his critics in the professional football hierarchy — the insiders like former coaches, players, media types and miscellaneous gurus — is that his style can’t make it in the pros; that his strengths begin and end with his abilities as a power runner in the college game’s option offense; and if forced to pass as often as the pros require, his career in the National Football League is pretty much headed for the rocks.

It’s what they were saying when Tebow was a backup quarterback in first exposure to the pro game last year and again early this season. It’s what the Hall of Fame Denver quarterback of another era, John Elway, now a Bronco executive, seemed to be saying himself.

What was the rap?

“He takes too long to get rid of the ball,” they said. “He has to wind up. It’s like the old style pitchers in baseball. The big pump-handle windup you used to see some of the pitchers using. If Tebow did that on the farm he’d knock down every cow in sight.”

No bovines were seen flying through the Metrodome roof Sunday. The Vikings confronted Tebow with an eight-man front that challenged him to pass. When it was over Tebow had thrown two touchdown passes, totaled 202 yards on a modest 10 of 15 throws and finished with the astronomical NFL quarterback rating of 149.3, which is normally the domain of the Tom Brady, Aaron Rodgers and Drew Brees.

Trusted leader
Beyond all this, Tebow was clearly the trusted leader of his team, and never so much as in the fourth quarter, when Willis McGahee scored from 24 yards out to bring the Broncos to within two points at 29 to 27. And from there it was Tebow running into the middle at express speed, and tying the score with the two-point conversion. It was over not much later when Prater kicked the last-second field goal.

Ponder might have had an excuse, an injured hip early that forced him to limp for the rest of the game. He did throw for 381 yards, a remarkable figure for a player battling injury. When it was over he admitted disappointment with his play and with his choices. He said he had no business making some of his throws, that he let the team down. But the constant Denver blitz, intended to intimidate the rookie, did take its toll. Yet through all of it, was the quality, speed and recklessness with which Percy Harvin plays his game.

Basically, it was brutal and elemental football waged by two teams with significant stakes — Denver to extend its remarkable charge to the top of its division and the Vikings to salvage some respect. It didn’t take long for Vikings’ Jared Allen to set the tone, tackling McGahee in the end zone in the opening minutes. Pressured a few minutes later, Ponder handed Denver the lead by throwing an interception, Haggan carrying it in from 16 yards out. Ryan Longwell cut it to 7-5 for Denver with 40-yard field goal. Then Kyle Rudolph, the rookie tight end who clearly is headed for stardom, sent the Vikings into a 12-7 lead with a high-flying finger tip catch of Ponder’s 19 yard pass. Longwell’s field goal made it 15-7 for the Vikings after which Tebow and Demaryius Thomas clicked on a 21-yard pass to open the second half. Tebow and Ponder then traded touchdown passes, Ponder’s enabled by Harvin’s perpetual motion running in their 52-yard hookup. But Tebow again connected with Thomas for 41 yards to reduce the Viking lead to 22-21.

Enter Harvin again, teaming with Ponder with a 48-yard pass and run that extended the Viking lead to 29-21. But McGahee shredded the Viking line from 24 yards out and Tebow tied it at 29 with his two-point conversion. Longwell lifted the Vikings back into a 32-29 lead, Matt Prater tied it at 32 with his own field goal from 46 yards out with 1:33 left.

But moments later Ponder violated the quarterback’s cardinal rule and failed to protect the ball in the closing moments with the Vikings tying to launch an attack from close to their own end zone. His pass was intercepted by Andre Goodman, who carried it to the Viking 15. A few moments later Prater kicked it through from 23 yards and time ran out on the Vikings.

In a season of seemingly endless pratfalls for his football team, no loss seemed quite as painful.