Their old breakfast hangout, the Original Pancake House in Bloomington, is too far a schlepp from downtown Minneapolis, so some of the Minnesota Twins Class of 2002 met up Monday morning at classier digs: Manny’s, in the Foshay Tower.

That’s where Torii Hunter and LaTroy Hawkins, now with the Los Angeles Angels, and the retired Eddie Guardado, Jacque Jones, Brad Radke and Joe Mays busted on each other as always, laughing and retelling old stories. Some of them, anyway. “We couldn’t say a lot because Eddie’s kids were with him,” Hunter said.

The merriment continued later at Target Field, where those six joined Denny Hocking, Doug Mientkiewicz, Eric Milton, Corey Koskie, then-and-now manager Ron Gardenhire and four coaches to throw out first balls before the Twins home opener against the Angels. Hunter and Hawkins, who left the Twins under less-than-cordial circumstances, acted all huggy and appreciative with the crowd’s eyes on them. But they couldn’t unload their ceremonial baseballs fast enough, rolling them over the dugout roof as soon as they jogged off the field.

The 2002 team remains the only one to win a playoff series with Gardenhire as manager, and the festivities afforded a temporary distraction to a reality as cold as the afternoon gusts. Ten years later, the qualities that made that scruffy bunch so tough and so lovable – the grit, the hustle, the defense, the whole Little Engine That Could mentality – escape the present-day Twins. And it may take years to get them back.

Monday’s 5-1 loss left the Twins 0-4 for the first time since 1981, and one loss away from the worst start since the club moved from Washington in 1961. The game wasn’t 15 minutes old when the Angels turned an old Twins staple around on them, a troubling sign that foretold the rest of the day.

The slow-footed Albert Pujols, rarely known for hustling as a Cardinal, lumbered from first to third in the first inning because center fielder Denard Span – normally one of the most aggressive Twins – chased a Kendrick Morales single to his left as if it had a lit fuse. Two runs followed. “We would first-and-third you to death,” said Mientkiewicz, the old first baseman and a rookie hitting coach in the Dodgers system. “I hear that in my sleep sometimes.” And in the seventh, Erick Aybar suicide-squeezed home a run that finished off L.A.’s 5-1 victory.

The Angels, Texas and Tampa Bay all play like the Twins used to, only with better players, and the Rays supplanted the Twins as the limited-budget model of building a division champion through scouting and player development.

Ten bucks says the 2002 Twins would kick this team’s butt nine games out of 10, which is a disgrace given the discrepancy in payroll ($40.2 million then, $94.1 million now) and the presence of home-grown former Most Valuable Players Justin Morneau and Joe Mauer in the lineup. Their arrival helped transform the Twins from that slap-and-run, bunny-cute operation to a heavily left-handed slugging team, perfect for the Metrodome but ill-suited to the unfriendly winds of Target Field.

In 10 years, the whole personality of the franchise has changed. Practical jokes abounded on that 2002 team, some perpetrated by Gardenhire himself. Hunter and Mientkiewicz praised Gardenhire for fostering a loose clubhouse and an aggressive style that bred confidence, making up for a lack of power and dominant pitching. Nobody scared those guys. Today’s Twins cower in the presence of Yankee pinstripes.

The 2002 players earned their way to the majors by rising through the Twins system, with some acquired by general manager Terry Ryan. After an 85-win sendoff for Tom Kelly in 2001, the club sweated out the threat of contraction before running away with the A.L. Central the next year.

The Moneyball acolytes might not tell you this, but those Twins stole a five-game Division Series from an Oakland A’s team that started Mark Mulder, Barry Zito and Tim Hudson, the most formidable rotation in baseball outside of Atlanta’s Greg Maddux, Tom Glavine and John Smoltz. They beat Hudson in Game 4 and Mulder in Game 5 to close it out, which seems more and more unbelievable with each passing season. 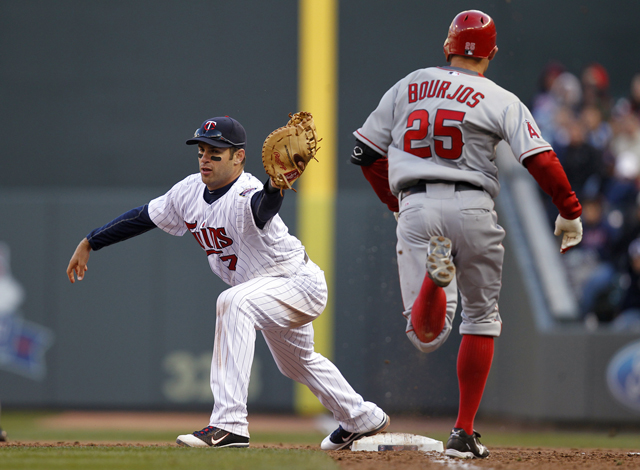 REUTERS/Eric MillerJoe Mauer catching a throw to first base on a ball hit by Peter Bourjos during the ninth inning.

“When people told us we couldn’t do something, we proved them wrong,” Mientkiewicz said. “And we took it personal. They called us a 4-A team, guys who were too good for Triple A but not good enough to play in the big leagues. That motivated us.”

No one reflected that better than the resilient Guardado. Thrust into the closer’s role in 2001 when the harder-throwing Hawkins couldn’t handle the pressure, “Everyday Eddie” saved 45 games, then a club record, without a single dominant pitch. Often, Guardado’s tendency for drama sent Gardenhire’s blood pressure through the roof. In Game 5 Guardado nearly blew a 5-1 lead for Radke, giving up four hits in the ninth (one a three-run homer by Mark Ellis) before second baseman Hocking ran down Ray Durham’s foul pop for the final out with the tying run at first.

We saw a glimpse of the old Twins Way in the third, when Mauer scrambled to second after catcher Chris Iannetta blocked a C.J. Wilson pitch in the dirt. That put two runners in scoring position for Morneau, one of the few strong-swinging Twins, but he tapped to the mound to end the inning. Newcomer Josh Willingham crushed a leadoff homer off the second-deck ribbon board in the fourth, his second of the season (no other Twin has any), and just missed another in sixth. But that’s been it for power. The Twins are batting .165 as a team and have yet to lead in any game.

It’s hard to imagine the Twins playing this badly all year, even coming off a 99-loss season. But it’s equally hard to imagine this roster, especially the younger players, clawing and scrapping like their counterparts from 10 years ago. Today’s Twins lack passion, panache and maybe a little heart. Monday, they didn’t need to look far to see what’s missing.