It’s easy to make fun of people you only see on television, so let’s deal with the pejorative clichés up front. They have jobs. And they don’t live with their parents.

Because the state Legislature did not take up a Vikings stadium bill on Monday, the folks in the purple face paint and funky Vikings costumes will be back at the Capitol on Tuesday, on Wednesday, and as long they need to until they get what they want — an up or down vote.

Preferably up, they hope.

Talk to the ones who are here most often, and you learn they aren’t the drunken screaming yahoos that TV often shows piling out of the Metrodome after Vikings victories. Some are in their 40s or 50s, married, with kids. Through this process, many learned how state government works, and how to talk to lobbyists and elected officials.

“You’ve got to keep your emotions in check,” said Diggz Garza, a 40-year-old from St. Paul who works with developmentally disabled adults at two group homes. “You can’t be out yelling and cursing and screaming, because you’ll get thrown out of there. If you don’t know the process and don’t do it right, they don’t have to time for you.”

The sun had just punched through the overcast on Monday afternoon when Garza returned after a quick change. He arrived earlier at the Capitol in football pants, a No. 19 jersey (combining the numbers of his two favorite Vikings, No. 10 Fran Tarkenton and No. 9 Tommy Kramer) and a helmet with two enormous horns.

But when the Senate adjourned quickly on Monday without taking up the stadium bill, Garza stopped home and changed into a floppy hat, shorts and a purple short-sleeved camo top — standard issue for his military-style group, Vikings World Order.  The top exposed Garza’s burly, heavily tattooed arms.

So why did he spend his day off here?

That’s a silly question to ask someone who painted his front sidewalk purple.

Two of the other 27 VWO members joined him in camo — Josh Lynch, a 27-year-old from Red Wing with an enormous mohawk who deals blackjack on the third shift at Running Aces, and 49-year-old David Gunderson of Brooklyn Park, who works in an electric machinery factory.

“I’ve been following the Vikings since I was 6,” Gunderson said. “They leave, I leave. I’m closing up shop.”

This week, Garza and other supporters will caucus at the hand-painted purple 1997 Chevy Astro Van in front of the Capitol that belongs to Larry Spooner of Plymouth, notable for its vanity plate — SPOON — and the Vikings canopy stretching behind it. A few tossed a football, stopping to return a cheer from the sixth-grade class at Grand Meadow School near Rochester, on a field trip to the Capitol. Seven of the 28 students wore Vikings jerseys.

Long before the Capitol halls attracted people in purple Superman costumes and horned helmets, Spooner was there, offering a fan’s support to various Vikings stadium initiatives. A season ticket holder, Spooner knows so many people in the state government that his application for a permit to park on the Capitol grounds this week was not only approved but expedited.

“I spent $85 on parking last week,” said Spooner, a Vikings cap on his head, and a Vikings satin jacket over a No. 28 Adrian Peterson jersey. “Obviously, I have a lot of passion.” 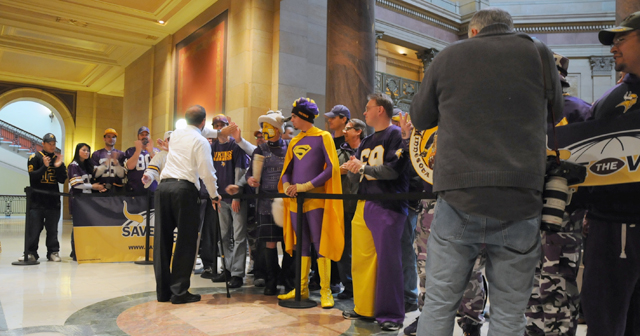 The group of supporters thanking (and high-fiving) Rep. John Kriesel for his support.

Now Spooner’s van is the gathering place for like-minded fans, from Garza and two pals in purple fatigues to a blond-haired drifter with a Bible who asked to sit in one of Spooner’s four purple papasan chairs — the big circular numbers that look inviting but tumble over if you’re not careful — to watch his flat-screen TV. (He’s got a DirecTV dish.)

“Do you support public funding for a Vikings stadium?” Spooner asked him. Not taking the hint, the drifter rambled a bit about the Vikings and Alan Page, who he correctly identified as a state Supreme Court justice. So Spooner asked him again, politely adding that anyone opposing a publicly funded stadium could rest a bit but not hang out. That, he got. “Oh, yeah,” he said.

It’s an issue that first brought Spooner, a 51-year-old warehouse supervisor from Plymouth, to the Capitol 15 years ago. Spooner co-chairs Minnesota Momentum, a pro-stadium group sanctioned by the Vikings. (Former coach Bud Grant is another co-chair.) Spooner has testified before various committees as a fan representative, most recently before the Senate Jobs Committee last week.

Among the signs surrounding the van are an oldie but a goodie that dates to at least 2006: “New Stadium Yes/Don’t Let Us Become The 3rd Dakota.” (This, obviously, predates North Dakota’s oil boom.) Another sign asked people to choose between a fixed and retractable roof by signing their names. Spooner stacked the deck on that one, leaving three times as much room in the retractable column for signatures.

Spooner can’t camp out overnight — the permit doesn’t allow it — but expects to be here the next two days as the Legislature tries to finish its business, which he hopes will include a Vikings bill.

“Can my testimony actually change minds? Probably not,” he said. “But what if? What if the one person who changed his mind happened to be the one vote deciding whether this thing goes through or not? Even if the worst happens, I can say I did everything I personally could in my power.”

A sympathetic boss allows Spooner to juggle his schedule and use sick time and vacation days to be here. Spooner’s wife, Lynn, joined him Monday, taking the afternoon off from her job at Starkey Laboratories in Eden Prairie. “When there’s a cause, you find a way,” she said. “I worked a half a day and said, ‘I have to come down.’ ”

The on-site supporters appear more civil that the folks in cyberspace, at least according to several legislators. State Sen. Scott Dibble, an opponent of the stadium bill, said he’s received more vile, vulgar and threatening emails about the stadium than other hot-button issues like same-sex marriage and gun control. He estimated 5 to 10 percent of the hundreds he received, most from outside his district, crossed the line. Dibble is gay, and he said some of the emails contain homophobic slurs.

“I know a lot of people support the stadium with principle and passion. That’s fine,” he said. “I’m not OK with people using swear words, threatening tones, calling people vulgar and vile names. Sometimes I wonder if the lack of personal contact and anonymity email affords somehow gives people permission to forget their manners. Or has political discourse and our civil engagement become that coarse? Do people think they can be more effective the ruder they are?”

Dibble said no stadium supporters on site have approached him. “Just being present, I think that’s fantastic,” he said. “People of all perspectives should be here all the time, calling attention to their issue and to their perspective in whatever creative fashion, in terms of decorum and civility, they can think of.

“My sense is, a lot of those folks are quite jolly and in pretty good humor,” he said. “That’s great. It adds to the theatrics and the color and the interest of the issue we’re debating.”