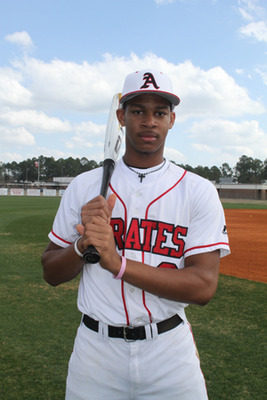 Not all draft classes are created equal, and unfortunately for the Twins, they’ve stumbled into a bad year to have their first top-10 pick since 2001 and five other top-100 selections.

There’s no year in which having the No. 2 overall pick won’t allow a team to potentially land a future star-caliber player, but the consensus on this year’s pool is that it lacks the elite-level talent typically available that high in the draft and isn’t even particularly strong in overall depth.

Georgia high-school outfielder Byron Buxton is widely considered the highest-upside prospect in the class, but several prominent draft analysts have suggested that he might not even be a top-five pick in many years. Stanford right-hander Mark Appel was once viewed as the clear-cut top college prospect and still sits atop many mock drafts, but his mid-90s fastball comes with more question marks than a typical college ace linked to the No. 1 pick.

In other words, the Twins are even bad — or at least unlucky — at being bad. And that’s not just the opinion of various outsiders publicly analyzing the draft for an audience at Baseball America or ESPN.com or MLB.com. Joe Christensen of the Star Tribune asked Twins Vice President of Player Personnel Mike Radcliff for his thoughts on the overall quality of the draft class and he didn’t pull any punches:

At this moment in time, this crop of talent is not very good. Last year, there was about seven or eight guys that were high end. We had eight guys with an 8 [on the 2-8 scouting scale] — the highest value you can give a guy — and this year we have zero.

It’s worth noting that last year’s class was considered unusually deep in elite-level prospects, with Jim Callis of Baseball America writing recently that “there were seven No. 1 overall pick-caliber talents available.”

Still, based on the above quote, Radcliff is seemingly saying that the Twins’ highest-rated targets in this year’s draft wouldn’t have been among their top eight targets in last year’s draft, and that’s very discouraging for a team picking No. 2 overall.

Of course, lamenting the lack of elite-level talent isn’t going to change anything and on June 4 the Twins will pick someone No. 2, regardless of where that someone would have been picked in other years. Whichever one of Buxton and Appel the Astros pass on with the No. 1 pick will seemingly be the favorite to land with the Twins one spot later, but that’s far from guaranteed, and a handful of total prospects could be in the mix. Let’s get to know them …

By far the best upside prospect … his body and off-the-charts athleticism have earned him comparisons to players from the Uptons to Matt Kemp to Eric Davis to Willie Mays. If you want raw tools, this is about as good as it gets. … There are risk factors here. Buxton has hit for very little power this spring … raising questions about what his actual power ceiling might be.

A five-tool center fielder … Buxton has emerged as the consensus top talent and compares favorably with [last year’s No. 5 overall pick Bubba] Starling, his parallel as 2011’s best athlete available.

Numbers: Appel has started 12 games for Stanford this season, throwing 94 innings with a 2.68 ERA and 95-to-21 strikeout-to-walk ratio. Conor Glassey of Baseball America says:

Appel has the ingredients to be a front-line starter. He has a pro-ready body at 6-foot-5 and 215 pounds to go along with his mid-90s fastball that touches 98. He throws a hard slider that has the potential to be an out pitch and his changeup has improved. … The knock on Appel is that he hasn’t dominated like most highly-ranked pitchers have in the past.

Appel has shown consistently above-average stuff all spring, but his command has come and gone and concerns over Stanford’s abuse of his arm may keep him from going in the top two overall picks. … The problem is that hitters seem to square up Appel’s stuff more than they should given its quality and velocity.

Numbers: Zimmer has started 12 games for San Francisco this season, throwing 83 innings with a 2.59 ERA and 96-to-15 strikeout-to-walk ratio. Glassey of Baseball America says:

Recruited as a position player … before transitioning into the role full-time last year. … Zimmer’s fastball typically sits in the 94-96 mph range and gets as high as 99 and his hammer curveball is just as good. … Zimmer pounds the strike zone and throws all four pitches for strikes.

Zimmer has the makings of four pitches that could be at least major league average. Any talk about the strong, durable right-hander has to begin with his plus fastball that he can run up to 97 mph. … His curve is a power breaking pitch, one that could be an out pitch at the next level. … He is a very consistent strike thrower.

Zunino is the best college bat in a terrible year for college bats. … He doesn’t offer any real plus tools, but there’s a lot that’s average to above-average and no major holes. … His weakest tool is his throwing arm, just average arm strength with a somewhat slow release … I don’t think he’ll ever have to move, but he’s unlikely to be plus back there.

Zunino is the best catcher in this draft class and he has the potential to be a very good everyday big league backstop. While he does have a bit of a long swing and can struggle with offspeed stuff at times, he has bat speed and loft, meaning he should have plenty of future power.

Gausman has two premium pitches with a fastball that sits 94-96 mph, touching 98, and he mixes in a low-90s two-seamer. … Gausman’s 85-86 mph changeup is a second plus pitch, but scouts do have significant questions about the development of his breaking pitches.

If I were drafting and I wanted a college right-hander this year, I’d go for Gausman. … I think Gausman has the best combination of size, stuff, projection … the breaking ball has been there in the past, it should be at least an average pitch, and his fastball and change could both be plus down the line.

In addition to those five prospects, California high-school right-hander Lucas Giolito was being talked about as the potential No. 1 overall pick before an elbow injury ended his season. Considering the Twins’ tendency to shy away from high school pitching and recent bouts with organization-wide pitching injuries, it seems unlikely that they’d target him, but if healthy, he’d definitely be in the mix.

No. 2 overall draft pick may not get the Twins that much this year