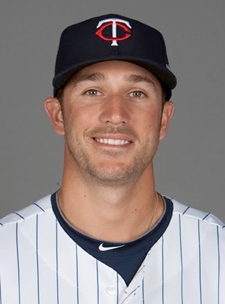 Going into the 2004 draft, many teams liked California high-schooler Trevor Plouffe more as a pitcher than as a position player, but the Twins were among the teams convinced he could be a good-hitting shortstop and took him 20th overall.

Plouffe was one of the Twins’ five first-round picks that year. The compensation for losing LaTroy Hawkins and Eddie Guardado to free agency allowed them to restock the farm system with five selections in the top 40.

Nine years later, Glen Perkins is the only one of those five picks to become a quality big-leaguer, and even that didn’t take place until last season when he faced a career crossroads and switched from the rotation to the bullpen.

Kyle Waldrop is still in the organization as a potential middle reliever but has just 11 innings in the majors at age 26. Matt Fox got a cup of coffee with the Twins in 2010 but is now a Triple-A journeyman. Jay Rainville never reached the majors.

At age 22, he became one of the International League’s youngest players despite not yet cracking even a .750 OPS at any level and predictably hit just .256/.292/.410 in 66 games for Rochester.

By promoting him so aggressively in the face of mediocre performances the Twins put Plouffe in an odd situation developmentally. He was a former first-round pick one step from the big leagues at age 22, yet he’d never actually shown anything to suggest that he was a top prospect.

In short, he looked like a bust. Plouffe was still fairly young and within the consistently mediocre overall production at Triple-A with some decent power for a shortstop, although the reviews of his defense made projecting him as a potential big-league shortstop very iffy.

In seven seasons in the minors, including three at Triple-A, his career-highs were a .280 batting average, .340 on-base percentage, and .430 slugging percentage. And two of those figures came in rookie-ball.

Plouffe failed to make the Opening Day roster last spring and was assigned back to Triple-A for a fourth consecutive season, at which point he shockingly hit .313/.384/.635 with 15 homers in 51 games for a 1.019 OPS that topped Justin Morneau and Jason Kubel for the highest mark by any Rochester player since the Twins’ affiliate moved there in 2003.

Suddenly he was back on the prospect map and back in the majors, although it didn’t translate to immediate success. In fact, Plouffe hit just .238/.305/.392 with an ugly 71-to-25 strikeout-to-walk ratio in 81 games for the Twins and was so bad defensively at shortstop that they started using him primarily in the outfield.

Because he was out of minor-league options and the rebuilding Twins weren’t ready to give up on Plouffe, he made this year’s team out of spring training as a non-shortstop utility man, but played sparingly and poorly while going 8-for-60 (.133) through mid-May.

And then everything changed. Starting third baseman Danny Valencia played his way back to Triple-A and the Twins turned to Plouffe as his main replacement while hoping that his throwing issues wouldn’t carry over from shortstop.

He’d never played third base regularly in the minors or majors, but Plouffe has looked capable there at the very least, and his arm strength is a real asset when he’s making accurate throws.

Through Sunday’s game, he’s hit .315 with 13 homers and a .793 slugging percentage in 24 games, including a stretch in which he went deep seven times in seven games.

Obviously the sample size is small, and he’s not suddenly Miguel Cabrera, but Plouffe has been the hottest hitter in baseball for a month now. And even combining his month-long homer binge with his hideous first six weeks equals power numbers that are tough to brush aside.

Despite a still-poor .252 batting average in 48 games overall this season, his slugging percentage (.566 through Sunday) ranks sixth among AL hitters behind only Josh Hamilton, Paul Konerko, Mark Trumbo, Adam Jones and David Ortiz. Last time a Twins hitter owned a slugging percentage that high this far into a season was Harmon Killebrew.

Isolated Power is a stat that takes slugging percentage and subtracts batting average to focus strictly on a hitter’s raw power, and Plouffe’s mark of .322 through Sunday ranks third in the league behind only Adam Dunn at .345 and Hamilton at .343. No other AL hitters have an Isolated Power above .300.

In the entire history of the Minnesota Twins, they’ve had a hitter top a .275 Isolated Power seven times, and all seven of them were Killebrew.

Expanding the sample size further to include Plouffe’s terrible 2010 debut and ugly 2011 showing still produces some pretty amazing power numbers. For his major-league career, he played 149 games through Sunday and logged 536 plate appearances, totaling 24 homers and 26 doubles for an Isolated Power of .209 that ranks seventh in Twins history among all hitters with 500 or more trips to the plate.

Here’s the complete top 10 in a Twins uniform:

Of course, in addition to the small sample size, it’s also important to note that Plouffe’s incredible power has come along with a lowly .232 batting average and .301 on-base percentage in those 149 career games. Those numbers are tough to live with, huge power or not, and because Plouffe also hit just .262 with a .316 on-base percentage in 337 games at Triple-A, it’s difficult to project a ton of improvement.

With that said, Parker Hageman of Twins Daily recently did some intriguing video-based analysis breaking down Plouffe’s altered swing and the same mechanical adjustments that led to his power explosion could potentially lead to a more palatable batting average.

He’s never going to hit .300, but if Plouffe could hit .265 while maintaining what has always been a decent walk rate — and one that figures to rise as pitchers avoid throwing him strikes — his all-around value would skyrocket.

Plouffe will obviously come back down to earth, and there’s still reason to be skeptical of his upside long term, but he’s shown enough power dating to Triple-A last year, enough plate discipline throughout his nine-year career, and enough early promise defensively at third base to believe he won’t simply turn back into a pumpkin at the stroke of midnight.

Much like starting pitcher Scott Diamond, his emergence is one positive from giving opportunities to untested players in a rebuilding year.