Who builds a racetrack without a grandstand?

That’s the odd thing about Running Aces Harness Park. Now in its fifth summer operating just off Interstate 35 in Columbus, about 25 miles north of Minneapolis and St. Paul, Running Aces has no elevated seating area for patrons — just 10 long benches on the apron along the home stretch, and maybe 100 chairs in the indoor space housing the pari-mutuel windows.

The track does have a bustling card room, an inviting restaurant overlooking the finish line, and a simulcast area with a full bar, all on the first floor of a two-story building with a huge mural of legendary pacer Dan Patch at the entrance. Though the Star Tribune and Pioneer Press never run their results or entries, people keep coming out anyway.

On a recent Saturday night, a growing Pick Six jackpot and a post-racing live band brought 1,500 or so people to the racing area, and several hundred more to the card room. General manager Bob Farinella suggested the crowd was larger, though it’s all guesswork. Running Aces doesn’t charge for admission or parking, and nobody counts the crowd.

But Running Aces, four years after going into foreclosure and changing owners, keeps plugging along.

John Derus, the former Hennepin County commissioner who serves on the Running Aces board of directors, said the track’s ownership group — Connecticut-based Black Diamond Commercial Finance, LLC. — is determined to hang on until the state Legislature passes racino legislation that would permit slot machines at racetracks.

That, however, seems even more of a long shot without Canterbury as a partner. Canterbury’s deal with Mystic Lake includes lobbying against slot machines at any non-Indian property.

“They were supposed to be allied with us with the racino,” Derus said of Canterbury. “While we’re working together to get the racino, they entered into their own type of deal with the tribes. I don’t mean to be bitter about it or anything, because I’m not really. It’s business. When you say we’re on our own, we’ve always been on our own. And we’ve done quite well.

“So far, this is our biggest year. About 2 1/2 weeks ago, we had our biggest day ever. We’re doing fine. We’d be doing a lot better if we had racino, that’s for sure.”

Farinella said Running Aces made a small profit last year even after losing 12 racing days in July to the state government shutdown. (They made up six in late August and early September.) This year, the track — with racing four days a week from June 6 to Sept. 3 and the card room open 24 hours — expects to meet its budget projections.

The card room has been so lucrative that the purse fund for racing has more than doubled since the track opened in 2008, according to the Minnesota Racing Commission’s annual report to the Legislature. The live handle — the amount of money bet at the track — is up 15 percent over last summer, and a month ago, the track bumped up purses 10 percent.

But the total handle, including simulcast wagering at other tracks, still lags far behind well-established harness tracks in larger markets. 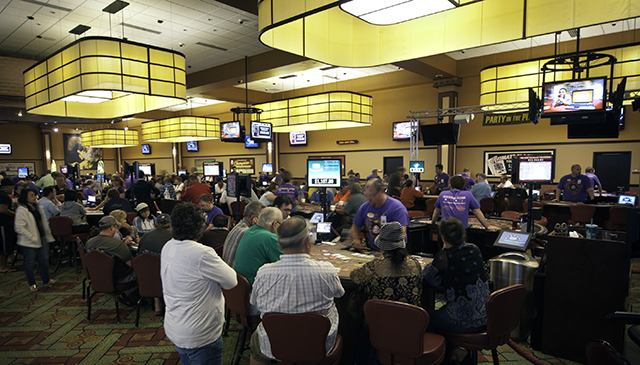 MinnPost photo by Bill KelleyThe card room has been so lucrative that the purse fund for racing has more than doubled since the track opened in 2008.

Small handles usually mean small crowds, but that’s not the case in Minnesota.

Even at Canterbury Park, officials scratch their heads over patrons who eagerly pay $5 for two draft beers on a promotional night but won’t risk $2 on a race.

Canterbury Park’s handle has been dropping steadily since 2004, though attendance is good; this season the Shakopee thoroughbred track averages about 6,300 per opening and drew 16,071 for its annual Extreme Race Day (riders on camels, ostriches, etc.) on July 21. Oh, and it charges $5 admission.

Running Aces patrons follow similar patterns. For the seventh race on July 28, with plenty of folks leaning on the rail, the win pool for the eight-horse field was $1,601. I’ve been on line behind guys at New York’s Belmont Park who pulled that much out of their pocket.

“We don’t get a lot of handle here,” Farinella said. “It takes time. Obviously, we’d like more handle. But our purses are up, and we’ve been able to sell our signal for simulcasting.”

How long Running Aces can operate without a boost from racino, however, remains in question.

Some Minnesota racing insiders long believed the track’s original co-owners — Minnesota-based Southwest Casino and Hotel Inc. and MTR Gaming Group of West Virginia — were primarily interested in slot machines and used harness racing to establish a business presence while waiting for racino to pass. That may explain the lack of a grandstand and the hiring of Farinella, whose background was as much in gaming as racing.

Farinella ran the U.S. Army’s slot machine program on overseas bases from 1980 to 1990 and then spent three years as a casino consultant and one as the general manager of a casino in Rock Island, Ill., before a 12-year run as general manager at Prairie Meadows Racetrack near Des Moines, Iowa. His move to Prairie Meadows in 1994 coincided with Polk County voters approving a referendum adding slot machines to the track. Running Aces hired him for the inaugural season in 2008.

“MTR, their main priority and business is horse racing,” said Mary Manney, the deputy director of the Minnesota Racing Commission who was hired in 2006 to oversee the construction and operation of Running Aces.

“Were they just interested in racino? I never saw that, and they never talked about it. Is it something they would have liked to have happen? Absolutely. But it was not something that was their motivation. Their motivation was the horse business and the card room.”

Running Aces opened with small bleachers on a grassy area adjacent to the apron. They were removed a year later, Farinella said, because the track’s liquor license limited beer sales to the apron. Derus said the original plans called for a traditional grandstand, but Southwest Casino and MTR Gaming ran out of money before it could be built.

Required by state law to hold 50 days of racing before opening its card room, the track lost $4 million that first year, laid off 10 percent of its staff after five months and defaulted on a $41.7 million loan from Black Diamond, which eventually emerged as majority owner.

Without an enclosed climate-controlled grandstand, Running Aces can only hold races in the summer. And Farinella said rain or excessive heat in the late afternoon in the Twin Cities often holds down attendance.

“The idea of adding bleacher seatings and elevated seating, I don’t know what happened to that,” Derus said. “It doesn’t mean it won’t happen. There’s also expansion plans to knock down a whole wall there for electronic gaming devices if we can get them. This is not a completed structure.

“They didn’t build anything on the cheap out there. They spent millions and millions of dollars. That’s one of the reasons they got in trouble – they didn’t spare any expense. They really felt strongly they were going to get racino. And I still think we may. But that’s conjecture.”

The track itself and the barn areas are top-notch and well maintained, according to Brandon Jenson, a third-generation harness trainer and driver based in Iowa whose family ships horses to New York, California and the Midwest. “It’s very horse-friendly,” Jenson said.

Purses, which range from $2,750 to $10,600 per race, compare favorably with other Midwest states, Jenson said. “It’s not as good as New York and Pennsylvania, but as far as Illinois, Iowa, or Michigan, it’s considerable better,” he said. “You can do OK here.”

Most horses at Running Aces come from out of state because the harness industry here is small, though growing. Last year, 123 standardbred foals were born in Minnesota, up from nine in 2002 and the most since the racing commission began keeping records in 1985. (Standardbred is the official name for pacers and trotters, to distinguish them from thoroughbreds and quarterhorses.) The best standardbreds don’t ship to Running Aces, just as the best out-of-state thoroughbreds don’t ship to Canterbury. The purses just aren’t big enough.

“Like any sport, you have to have a tiered system, because not everybody is going to be good enough to run at Yonkers Raceway or the Meadowlands,” said Susan Schroeder, executive director of Minnesota Harness Racing. “You have to have places for horses to start.”

From the outside, Running Aces is not acting like an enterprise hemorrhaging money. This year, Farinella said the track spent $60,000 on new apron benches plus $16,000 on flat-screen televisions for the restaurant.

“We’re not shy about putting money into the place,” Farinella said.

Even the little touches are telling. The track offers top-of-the-line Hebrew National hot dogs for $3 and doesn’t swap them out for a cheaper brand on Dollar Night every Tuesday. (The food and beverage director, David Kremsdorf, is a New Yorker.) The Thursday night seafood buffet is another big seller.

A marketing approach targeting commuters appears to be working. Much of the track’s $1.5 million marketing and advertising budget goes to drive-time radio buys. Two years ago, the track gained local approval to construct a huge marquee visible from I-35 in both directions. “We thought getting in front of 80,000 people a day was more important than buying advertising in a newspaper,” Farinella said.

Manney believes Running Aces can sustain itself a few more years even without racino.

After that? No one knows whether the electronic pull tabs that are supposed to help fund the new Minnesota Vikings stadium will generate the revenue projected.

A shortfall, Manney said, might force the Legislature to reconsider racino, even if Canterbury and the Indian gaming lobby object.

“We’ll have to see what happens,” she said.

Running Aces Harness Park still in the race, even without racino