Minnesota Lynx players could bring a guest to the White House for the Sept. 18 ceremony honoring their WNBA championship, so Lindsay Whalen chose her mother, Kathy. The visit included a tour of the mansion, and mother and daughter marveled at the splendor and the history represented wherever they turned.

“It was a pretty amazing experience,” Whalen said after a Lynx practice earlier this week. “I’m just happy we got the chance to do it. We had fun doing something like that together. I think just being in all those different rooms — the Green Room, the Blue Room, getting to sit in chairs not many people get to sit in — I think that was the best part about it.”

The tour and the East Room ceremony included a meet-and-greet with President Obama, whom the players said knew a little bit about each of them. (Credit a diligent White House staff for that.) Obama reportedly knows his hoops; he had a tennis court adapted at the White House to indulge his passion for pickup ball.

And he saved an extended shout-out for forward Maya Moore, a previous invitee with the University of Connecticut.

“She is becoming a regular here,” Obama said. “I mean, this is like the fourth time she’s shown up at the White House.”

Later, he added, “I wouldn’t want to take any of these ladies on. I’ve had the pleasure of playing with Maya and she lit everybody up. It is not fun when she’s raining down jumpers on you.”

Obama had to hustle to New York City for two campaign events and an appearance on “The Late Show with David Letterman,” so the Lynx couldn’t shoot around with the basketballer-in-chief.

“I was hoping to get my chance to play with him,” said Lynx scoring leader Seimone Augustus, fresh off her second Olympic gold medal. “He said, `Next year.’ Hopefully he wins his seat and we win this year, we’ll be right back next year and we’ll get a little one-on-one in.”

Plenty of places exist to debate the presidential election – and we know you will — so we’ll stick with basketball here.

Five years ago, you could have gotten better odds on the Lynx folding or bankrupting owner Glen Taylor than visiting the White House. After years of ridicule, neglect and incompetence, the Lynx turned themselves into a model franchise. They already had Augustus. All it took was returning Whalen to her home state, drafting Moore, acquiring more tough-minded folks who could play, and hiring a coach in Cheryl Reeve who not only knew what she was doing, but demanded everyone else did, too.

Neither does this: Can the Lynx repeat?

After falling just short of WNBA records for victories and field goal percentage, the 27-7 Lynx begin the playoffs Friday night at the Target Center, meeting the Seattle Storm in Game 1 of the best-of-three Western Conference semifinals. The Storm, anchored by Australian Olympic star Lauren Jackson inside and U.S. Olympian Sue Bird on the point, won the 2010 WNBA title. Game 2 is Sunday night in Seattle, with a potential Game 3 in Minneapolis on Tuesday. The Lynx again finished with the WNBA’s best record, so they hold home court advantage in every round.

With a mix of superstars, selfless support players like center “Mama Taj” McWilliams-Franklin and forward Rebekkah Brunson, plus youth on the bench, the Lynx have turned antiquated Target Center into the most happening venue in town — no small feat with sparkling Target Field next door.

Gone are the days when Lynx/Timberwolves president Chris Wright and his staff scrapped for corporate support and couldn’t give away tickets. The Lynx sold 2,500 season ticket equivalents while averaging 9,683 per game, the latter a franchise record and second-highest in the league behind Los Angeles (10,176).

The Twins play Detroit on Friday night about an hour earlier than the Lynx. Any guesses on which venue will generate more buzz?

“It’s great to not have to almost beg people,” Wright said. “Now we have people calling us saying, ‘We love what you’re doing and we want to be a part of it.’ ” 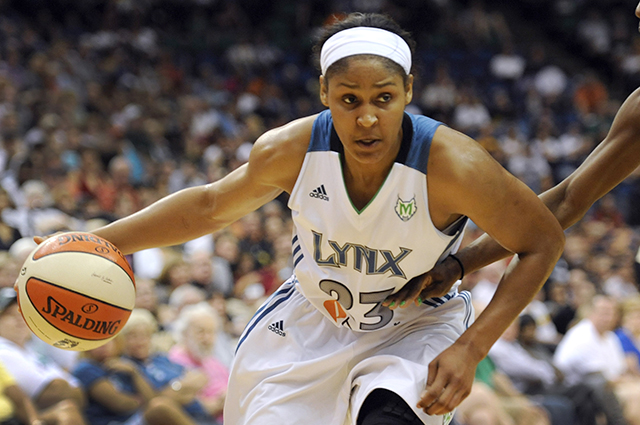 MinnPost photo by Craig LassigMaya Moore’s improvement this season and steadiness inside from Brunson strengthened the Lynx offensively.

Wright expects 9,000-plus on Friday, which means a sold-out lower bowl with spillover into the upper level. Tickets will be available for walkup sales. Timberwolves forward Kevin Love plans to be there, and he bought 500 upper-level tickets to give away to fans. Reeve promised to do the same when the Timberwolves make the playoffs.

“I’ll buy as many as he bought, and I’ll pay the same thing he paid,” she said. “Fair enough, right?”

(First-round upper level tickets range from $15 to $35, or $5 more expensive than the regular season, according to the Lynx website. That’s a minimum outlay of $7,500. So either Love got a discount, or Reeve makes more money than we think.)

That fan support, the players say, has turned Target Center into a nightmare for visiting teams. Augustus and Brunson think it’s become even tougher than Key Arena in Seattle, the WNBA standard for noise and intensity.

“Now people are kind of intimidated to come here, because our fans are in the game, yelling and screaming, personal attacks and stuff like that,” said Augustus, who averaged 16.6 points per game. “When we go to other arenas, it’s kind of like, they don’t care who’s out there, they’re cheering for everybody. But our fans are like, ‘Boo, yay.’ That’s it. They’ve done a great job.

“Seattle has a very intense crowd. They’re into the game just like the Target Center. But I have to give our fans the edge, because they’ll call out Sue Bird in a minute — stop playing with your ponytail and play some defense. Our fans are a little bit more personal, as opposed to the Seattle fans.”

The Lynx won last year with defense and rebounding. Moore’s improvement this season — she averaged 16.4 points, more than three better than her rookie season — and steadiness inside from Brunson (11.4 points, 8.9 rebounds) strengthened the Lynx offensively.

It is a talented and entertaining group that, off the court, engages the community and stays out of the police blotter. After a decade of irrelevance, the Lynx earned the support they will get Friday night.

“We talk about it periodically during the regular season,” Reeve said. “I want them to enjoy what they built.”

“Certainly our business staff works really hard in getting people here, but they built it with the product they’re putting on the court. Every time they play here, I want them to go out and soak that up. When we don’t play well, we have a sense of ownership of that. We don’t want to disappoint our fans. We have high expectations, and we want our fans to have high expectations of us.”