There are many, many reasons why Timberwolves coach Rick Adelman should be aggrieved by the loss of his best player, power forward Kevin Love, for 6 to 8 weeks because of a broken hand Love reportedly suffered while working out at his condo Wednesday.

The injury will certainly retard the momentum the team had been building after this summer’s auspicious upgrade in both overall talent and complementary skills on the roster. Fan enthusiasm — and the box-office dollars that come with it — will also get whacked.

Adelman was already moving the team forward without the services of his second-best player, point guard Ricky Rubio, who is expected back from last season’s knee surgery sometime in late December. And he is well aware that another hole in the starting lineup could suddenly open up at any time if new shooting guard Brandon Roy suffers complications from the six knee surgeries that compelled Roy to retire from the game at the beginning of last season.

But another source of aggravation for Adelman, one exacerbated by Love’s injury, involves a player who is in the best shape of his young career — second-year forward Derrick Williams. In the summer of 2011, before Adelman was hired, the Wolves selected Williams with the second overall choice in the NBA draft — the highest pick in the history of the franchise.

Highly regarded but not consistent

After two years at the University of Arizona, Williams was widely regarded as an explosive scorer and rebounder who was immediately ready to play in the pros. But his rookie year was inconsistent, and his skill set often seemed incompatible with the style Adelman prefers at both ends of the court.

His defenders pointed out that he was just 20 years old last season, deprived of a proper training camp by the lockout, and prevented from playing his natural power forward position by the presence of Love. It should be noted that Adelman rarely was among those defenders, for reasons that were obvious to those who know the premium the coach places on court vision, sharing the ball and team defense, which are all glaring weaknesses in Williams’ game.

Now, with Love sidelined and Williams reporting to camp buffed down to less than 8 percent body fat and with a year’s experience under his belt, the pressure will be on Adelman to promote this highly prized youngster.

Otherwise, the clear implication will be that the Wolves’ front office made a significant mistake drafting Williams so high, instead of either trading down or choosing someone else. It will also hinder the progress and harm the trade value of a player who is regarded by management — specifically owner Glen Taylor and President of Basketball Operations David Kahn — as a key long-term asset.

It makes for an intriguing drama that will be played out in earnest over the next two months. Williams is a gifted scorer who can be a matchup nightmare for opponents — too quick for power forwards, too big for small forwards.

He rang up 27 points in 27 minutes against the Clippers last season with an inside-outside arsenal that included four layups and four three-pointers without a miss. But six weeks later, against the same team, he shot 1-for-7 from the field and committed four turnovers and five fouls in 26 minutes of an ugly loss.

More to the point, Williams doesn’t pass the ball well. Only center Nikola Pekovic had fewer assists-per-minute among the Wolves’ regular rotation players last season. Such ball-hogging can be acceptable when you make 56.4 percent of your shots, third-best in the NBA, as Pek did last year.

By contrast, Williams shot 41.2 percent, including an abysmal 26.8 percent from three-point territory. And on a team that has precious few individual lockdown defenders (especially with Rubio out), Williams’ inexperience and inefficiency at the defensive end hurts the synergy Adelman will need to limit the points allowed to opponents.

To continue the indictment, although Williams dramatically worked on his body during the offseason — arriving with renewed quickness to accommodate minutes at small forward but without sacrificing much of the strength required to play power forward — his attitude might still be problematic.

When I commented on his disappointing rookie season during Media Day and asked him if he felt he left himself down, he said no, and claimed last season wasn’t a disappointment because he was the only member of the team to play all 66 games.

Maybe that’s a proud player pushing back by engaging in the power of positive thinking. During the first few days of camp, Adelman raved about Williams’ attitude and conditioning.

But as the camp unfolded and during the preseason games to date, some familiar problems have arisen. One is shot selection. Adelman wants fewer jumpers and more drives to the rim. Williams said the coach has urged him to “attack attack attack” for his points, which is why we have seen Adelman spin and grimace as Williams clanks jump shots during this preseason.

The day before Love was injured, the coach admitted he wasn’t sure how he was going to get Williams regular rotation minutes when the games start to count in November. 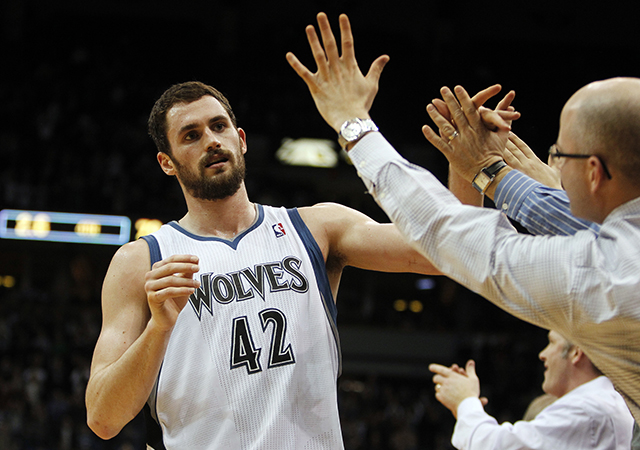 REUTERS/Eric MillerKevin Love’s injury will certainly retard the momentum the team had been building after this summer’s auspicious upgrade in both overall talent and complementary skills on the roster.

Adelman has some options besides promoting Williams to fill Love’s spot. He could instead promote Dante Cunningham, a gritty role player who has impressed this preseason with his hustle and shot-blocking. Or he could move the veteran Russian Andre Kirilenko from small forward to his more natural position of power forward and slide Chase Budinger, who played for Adelman in Houston two years ago, in at small forward.

Judging by what we have seen thus far this preseason, either of those moves could help the team as much as promoting Williams — and, more significantly, retain the integrity of Adelman’s unselfish, free-flowing system.

On the other hand, Cunningham and Budinger are both second-round draft picks, generally regarded as marginal players who need to compensate for a lack of talent with grit, savvy and a keen sense of their strengths and weaknesses. In other words, they are the converse of Williams.

Understand that when it comes to personnel decisions, Adelman is first among equals in the Timberwolves front office. Only three other coaching legends — Phil Jackson, Pat Riley and Jerry Sloan — have won more games at a higher winning percentage in the history of the NBA. To get him to sign on to a franchise that had won just 32 games in the previous two seasons combined, Taylor and the Wolves had to ensure that he would have a significant voice in how the team was shaped.

During the off-season, he presented a detailed report on every player on the roster, sometimes with stipulations on whether or not he wanted that player retained. According to a team source, of all the players viewed negatively by Adelman, only one remains.

The place where Taylor and Kahn did not allow Adelman full sway was over Derrick Williams — who may, but likely won’t, be getting the majority of minutes at power forward while Love is out.