After the unloved replacement officials were excused from any further embarrassment, one of the more brazen football analysts announced that the NFL was ready to return to normalcy. There were things you could now safely predict.

That was before events of Sunday in Detroit.

So welcome, Minnesota Vikings, to the National Football League playoff sweepstakes. You now have a shot at it. Wistful perhaps. But a shot.

After four games? After 13 losses in 2011 and nervous shakes over the health of their franchise player? And after 11 consecutive losses to the three other teams in their division, Detroit, Green Bay and Chicago, spread over two years?

After all that. In Detroit Sunday the Vikings exposed the Lions amateurish kickoff and punt coverage and won  20-13 behind a defense roused to a passion that was basically new to this season. They did it without a conventional touchdown — running or passing. They did it with   another transcontinental kickoff return by Percy Harvin, with a Marcus Sherels’ punt runback and two field goals by Blair Walsh.

The victory means that if favored Dallas beats the Chicago Bears tonight, it will lift the Vikings, at three wins and a loss, into undisputed first place in the NFL’s North Division with a fourth of the schedule gone.

Are 12 more games in the NFL close to an eternity? More or less. But Sunday the Vikings played with a passionate defense when it was necessary, thanked the gods for Percy Harvin and Adrian Peterson and today can look ahead to Sunday’s home game with Tennessee — whose only win in four games was in overtime over the Lions.

What links the Vikings and Tennessee this week will be one of the most bizarre coincidences in pro football history. Tennessee beat the Lions last week by scoring touchdowns on a punt return and a kickoff return. The Vikings won their game Sunday by doing the same thing. Until this year, the last time it happened in the NFL was more than 70 years ago, when the goal posts were on the goal line, the helmets were leather and there were no TV time outs because there was no TV.

For the Vikings what turned out to be the critical play was the 77-yard touchdown punt return by Rochester, Minn.’s Marcus Sherels in the third period that stretched the Viking lead to 20-6 and piled more pressure on Lions’ quarterback Matt Stafford. He responded by leading a drive through the air that reached the Vikings’ one-yard line, from where Stafford ran it in. But that was the end of the scoring 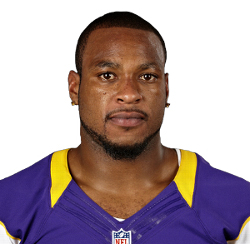 Yet it was the irrepressible Harvin who set the tone, taking the opening kickoff in the end zone and streaking 105 yards through a mesmerized Lion defense. Nobody on the Viking bench was amazed. The Lions kickoff team clearly had been scouted. And nobody on the Viking bench was startled by the Harvin’s seemingly effortless flight through and around the disappearing Detroit defenders. Coach Leslie Frazier acknowledged later that the Detroit scheme had been predictable, and Percy needed no blueprints.

For Adrian Peterson, the game seemed a liberation. They turned him loose full bore against the Lion defense, headed by the widely unloved Ndamukong Suh, and Adrian smashed, sprinted and slickered his way to 102 yards. The cheerleading Viking defensive line on the bench loved every yard of it. With this going on, quarterback Christian Ponder was limited to 111 yards through the air while the Lion’s Stafford , trailing from the opening moments, threw 51 times and hit 30 for 319 yards.

None of that aroused much frenzy from the home crowd because the Lions seemed unready for the quick strikes of the Vikings’ special teams, Peterson’s offense or the combat zest of the Vikings defense. That included a hammering that Harrison Smith, the rookie deep safety, delivered twice on would-be receivers near the goal line and in the end zone.

In fact, the Lions’ offense played much of the early going in a kind off demoralized futility that seemed out of tune with the closeness of the score. Chad Greenway, Antoine Winfield and Jasper Brinkley of the Viking defense had a lot to do with it. It was the kind of defense Frazier had been looking for since the season began, combining veteran experience with a commitment that seemed to crank up the intensity.

They played smartly and passionately, he was saying. They came to deliver a blow and they avoided expensive penalties. The Lions’ running game was defused and while Stafford threw for 319 yards, the Vikings controlled the ground game, avoided fumbles, limited the output of the  Lions’ receiving star, Calvin Johnson, to 54 yards and avoided fumbles.

“It’s what we had been looking for,” Frazier said.

They also had been looking for those predictable Detroit kickoff lanes, which nobody in pro football exploits with the verve of Percy Harvin. He caught the opening kickoff on his left side of the end zone and sprinted straight up field for a few yards. The onrushing Lion pack poured in that direction, not immediately recognizing the rest of the field was wide open. This is always dangerous and an unwanted condition when Harvin is handling the ball. He shifted right at full velocity with no Lions in sight the rest of the way.

The Vikings? There still a work in progress. Ponder makes strides each week and the Viking receiving corps was clearly upgraded with the four catches of Jerome Simpson, playing his first game as the new Viking deep threat after serving his suspension for substance abuse.

So now the Vikings have the team that will carry them into the next 12 games. It is acquiring some attention around the league. The question now is whether it can go head-to-head with Green Bay, Chicago and Detroit for the rest of the season. Add presently unbeaten Houston and Arizona.

But we now know they can contend. It’s a start.