In the beginning Sunday there was Adrian Peterson slashing the Seattle line,  terrorizing tacklers, scoring twice and stirring himself into a frenzy; one man against 11.

In another time it would have been a sight to lift his football team into rollicking physical dominance. It could have blown up the game early and sent the Seahawk crowd home with wagging heads. It was Peterson at his dynamic best running for 182 yards, 74 of them on a first-quarter burst that led to an early touchdown.

But this was Sunday in Seattle and eventually the only shaking heads in the Vikings’ 30-20 loss belonged to the custodians of the Vikings passing game. It was dreadful, again, and all of the forgiveness in the world couldn’t erase the sight of young Christian Ponder scrambling clueless for open receivers, worrying about interceptions and seemingly losing confidence with each stride.

He played the game like a man in a straitjacket, the command that quarterbacks are supposed to carry having disappeared. It was clear from the start that Ponder has yet to regain a semblance of the verve and performance he carried in the early season. They were 12 minutes into the game before he completed his first pass. Scrambling to find an open receiver, he looked lost, weighing choices, wary of making a mistake. His ambivalence was hardly the only messy sight for the Vikings.

There was Percy Harvin, he of so many heroics in his four years of professional football, publicly haranguing Coach Leslie Frazier on the sidelines, presumably about doing something different with the Viking offense. His argument might have been a lot better than his manners. But if he was trying to persuade the coach to keep getting the ball to Adrian and Percy, he may have been right. The alternatives didn’t look all that hot. There is never any question about Harvin’s skills and his heart, on display again Sunday until an ankle injury and possible hamstring left him in some doubt about Sunday’s game with Detroit.

But in pro football it does start with the quarterback. You could feel young Ponder’s discomfort, conscious first of avoiding sacks or errant throws. It didn’t help when Harvin, playing angry and on a gimpy ankle, sometimes returned to the huddle shaking his head. You got the impression that Percy was trying to tell both Ponder and the coach to get the ball to Adrian and Percy. Now. Every play. And the next. Basically that wouldn’t have been a bad idea. But it also occurred to the Seattle defense.

You have to know that it’s hard to play a complete professional football game that was relatively close from start to finish and gain only 63 yards in 22 passing attempts. It is also hard and virtually impossible in today’s sophisticated football to achieve a frigid efficiency rating of young Ponder’s 37.3, especially when it’s compared with the 127.3 of the Seahawks rookie quarterback, Russell Wilson.

Does all of this pile too much of the blame on a young quarterback for the general mess of the Viking performance? It might. There weren’t a whole lot of heroes aside from Peterson and the young field goal kicker Blair Walsh, who hit one of his monster 55-yarders while there was still time. The Viking defense won no blue ribbons. It gave up 385 yards and allowed Seattle to the dominate possession time. When it was over, Leslie Frazier seemed in no mood to open a new “is it time to warm up Joe Webb and bring some life back to the Vikings’ quarterback job.” He did talk about the offense’s growing inadequacies. So there will be a lot more scrutiny this coming on Sunday at the Metrodome, and, with luck, a lot more production. 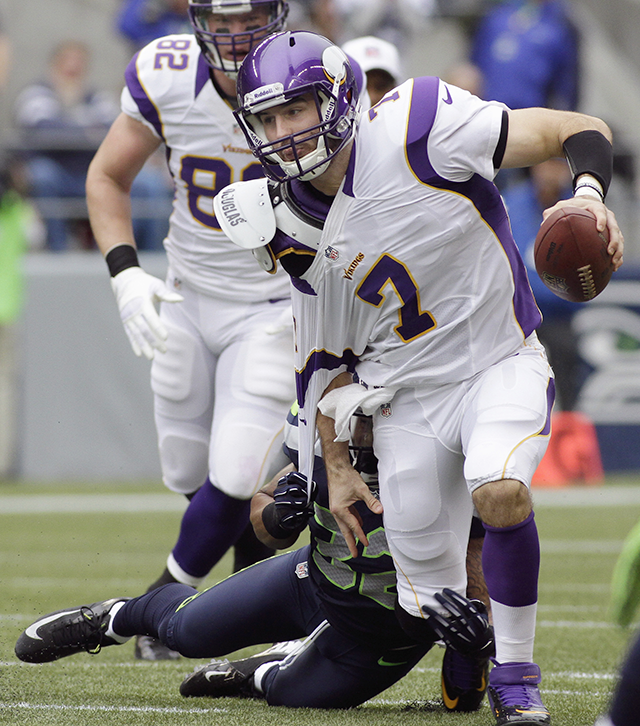 One thing you might have trouble accepting is that the loss to a Seattle team playing on its home turf and pumped up with its stadium’s unearthly sound does not doom the Vikings in the playoff picture. They now stand 5 wins and 4 defeats in the NFL North. Chicago leads with 7 and 1, Green Bay is 6 and 3 and Detroit trails at 4 and 4. The bad news is that five of the Vikings’ last seven games are with the other three, including next Sunday against Detroit.

The good news is that Adrian Peterson never looked as magnificent as he did Sunday, just two months into his recovery from a knee injury that might easily have ended his career. They gave him the ball in the early moments, and he broke from the line of scrimmage in one power burst, slipping and overpowering tacklers, willing his way and bolting 74 yards. He scored a few minutes later.

Marshawn Lynch, the Seattle running star, netted 124 yards and scored one touchdown. But ultimately the difference between the teams was Seattle’s young Russell Wilson. Wilson, who was an itinerant quarterback in his college years, the last at Wisconsin, was written off by a lot of the scouting gurus as too small to make it in the pros.

You are not going to get the Minnesota Vikings to concur. Wilson was all over the field, hitting two touchdown passes, one of them to Sidney Rice — especially embarrassing to the Viking administrative suits. It was Rice who starred for the Vikings in 2009, when he helped Brett Favre take the Vikings to the edge of the Super Bowl, and then looked elsewhere for employment and found it Seattle.

It got especially embarrassing when Rice took a long lateral from Wilson and threw a pass to Golden Tate, best remembered until now as the receiver who outfought the Green Bay Packers in the end zone and stole a winning touchdown from them.

After Peterson opened the scoring early, Wilson’s six-yard pass to Tate tied it.  Rice then scored on 11-yard pass from Wilson, but Peterson nailed his second touchdown from four yards out to tie it at 14-14. Blair Walsh kicked a 36-yard field goal to give the Vikings a 17-14 lead in the second quarter; but Tate’s 11 yard touchdown pass from Wilson made it 20-17 for Seattle before Lynch stretched the  Seattle lead to  27-17 from three yards out. Walsh’s long distance field-goal prowess cut it to 27-20. But Seattle stalled it out, clinching with Steven Hauschka’s 40-yard field goal with five minutes left.

The Vikings efforts to punch back into the game in the last minutes were strenuous but futile. Harvin might have been right about where the ball ought to be going. What revealed itself once more was that aside from Harvin, wherever he lines up, the Vikings don’t have a serious deep passing threat.

But first they have to find a comfort zone for their troubled young quarterback.

Vikings’ Ponder playing like a man in a straitjacket