There were a bevy of beneficent things arising out of the Minnesota Timberwolves’ triumph over the Oklahoma City Thunder on Thursday night. It happened in a marquee forum — the NBA’s national weekly showcase on the TNT network. It was against an opponent riding a 12-game winning streak and owning the best won-lost record in the NBA. And it was accomplished in a convincing fashion, as the Wolves led from start to finish.

But perhaps best of all, this unlikely victory was the opposite of a fluke. In the Wolves’ 24th game, the team finally parlayed the skill set of its upgraded personnel with the offensive template set forth by coach Rick Adelman in the manner envisioned by those are bullish on Minnesota’s playoff chances this season.

Adelman’s teams have always been renowned for their mixture of player movement and ball movement on offense. They are not oriented toward getting points in transition via the fast break, or having one superb floor general orchestrate everything in the half-court sets. Instead, they flourish through spacing and execution: Spreading five players across the half-court terrain who can all pass, shoot and handle the ball at a level that won’t sabotage the flow, and then setting them in motion to exploit the open seams in the opposing defense.

With very few exceptions, the Wolves have both moved the ball and had their players moving without the ball very well thus far this season. Yet the offense has mostly sputtered — the Wolves currently rank 19th among the 30 NBA teams in offensive efficiency (points generated per possession)—because the team has been unable convert three-points shots accurately enough to compel opponents to open the seams by coming out to guard the long-range shooters.

How bad has it been? The Wolves rank dead last in three-point accuracy among NBA teams, shooting just 30.1 percent. Not a single player on the roster is even at the league average of 35.7 percent — J.J. Barea is closest at 33.9 percent.

Kevin Love is by far the most important player in this aspect of the Wolves’ offense. Love is especially valuable because of his unique combination of skills. He is rugged, crafty and tenacious enough to be one of the game’s best rebounders, a talent that requires opponents to match him up with one of their own burly behemoths under the boards.

But over the past two years, Love has also been one of the game’s best big men from three-point territory, a talent that requires opponents to guard him with a quick opponent out on the perimeter. In other words, when Love is on his game, there are precious few defenders able to deter him both down near the hoop and out by the three-point arc.

Obviously, Love has not been on his game thus far this season. The list of obstacles in his path this season has been daunting: A broken hand, a lack of conditioning after resting from the Olympics this summer, the flu, the absence of premier passer Ricky Rubio, a bruised thumb, a sore shoulder, a hyper-extended arm, and fallout from his unfortunate, negative comments about management and his teammates earlier this month. He came into the Thunder game shooting 21.9 percent on his three-pointers, well below the 37.2 percent and 41.9 percent of the previous two seasons.

But in the first quarter of Thursday’s game, everything clicked into place. Love, center Nikola Pekovic, and 6-6 rookie combo guard Alexey Shved played a three-man game that ravaged the Thunder defense, all keyed off the spacing provided by Love’s accuracy from long-range.

Over a seven-and-a-half minute span from 8:42 to 1:18 remaining in the first period, Minnesota scored 27 of its 30 points — the most allowed by OKC in the first quarter this season. All but one of the 11 baskets scored during that spurt were by Love, Shved or Pekovic, and all but one were assisted by Shved or Love. (Luke Ridnour had the remaining bucket and assist.)

Although there was naturally some variation, the bread-and-butter play involved a pick-and-roll by Shved and Pekovic, with Love available for a dish-out on the perimeter. When the Thunder tried to double-team Shved and thus needed to drop Love’s man down to cover the rolling Pek, Shved fed it to Love, who promptly buried the three-pointer. If Love’s man stayed with him, Shved found Pek for the rolling layup. If Love’s man cheated down a bit and then came back to him, Love received the ball and then dished it down to Pek, who zipped it back over to Shved for a jumper.

This slicing and dicing was a thing of beauty, and would have been even more devastating had Pek not missed four layups in that seven-minute span. In other words, the Wolves could have easily scored 38 points in the first quarter. As it was they racked up 11 assists — 4 by Love, who doubled his per-game average in the first period alone — and only one turnover.

After the trio rested, they resumed their synergy with slightly less efficiency in the second period. Pek rolled for four more layups — assisted twice by Shved and once by Love and Andrei Kirilenko — to finish the half with 18 points. He eventually totaled 24 and is averaging 22.5 points on 55.6 percent shooting over his last six games. The Wolves are 6-0 when he scores at least 20 points.

In the second half, the Thunder demonstrated why they are among the NBA elite. Playing the second night of a back-to-back and without their third-leading scorer Kevin Martin (out for the game with a quad contusion), they forced the action with their aggressive play, leading 15-2 in fast break points during the half while getting seven steals and converting 14 of 15 shots at the free throw line.

With 10 minutes to play, the Wolves’ lead was down to one. That’s when diminutive guard J.J. Barea took over.

Now, it must be stressed that Barea “taking over” is often not a good thing. Earlier this week in a disappointing loss to Orlando, Barea took it upon himself to shoot the Wolves to victory in the fourth quarter against the Magic. The result was eight shots for Barea (he made 3) and three total for Love and Pekovic, as the Wolves were outscored 28-15 in the final stanza. For the night, Barea was a team-worst minus 18 over 22 minutes of a 9-point loss, meaning the Wolves were plus 9 in the 26 minutes J.J. was on the pine.

For the season, according to Basketball-reference.com, Barea is shooting 52.9 percent when the margin between the two teams is 10 points or more, and just 36.2 percent when the teams are within five points of each other. This can be especially problematical because on the Wolves’ roster, only Love launches more shots per minute. As for crunch time, Barea’s fourth-quarter accuracy is 38.2 percent, buttressed somewhat by his 33.3 percent mark from long range.

Bottom line, Barea is a sparkplug prone to deadening the battery of the offense through repeated, unsuccessful attempts to ignite. 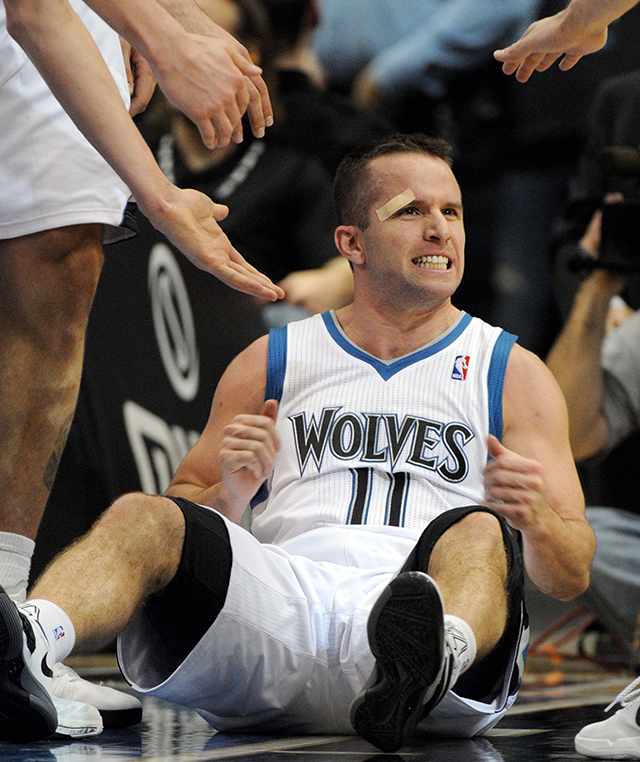 Ah, but the checkered gift within the J.J. Barea package is that he would be the last person to let past failures enter his consciousness. He is likely far more aware that he has now scored in double figures in nine straight December games (and 10 overall), despite never logging more than 27:08 of playing time.

And he is especially aware that in the three most significant wins of the season — at Brooklyn and at home against Denver and now OKC — he has indeed been a catalyst. To use another analogy, deploying Barea is like playing roulette — the odds of success are low, but the rewards are potentially very lucrative. It helped get Dallas a championship in 2011 — and Barea a 4-year, $18-million deal in December of that year.

Not coincidentally, that was the first free-agent signing done by the Wolves after Adelman was hired. For better or worse, the coach has always appreciated players who can handle the ball and who don’t shrink from the big moments. That is part of his obvious affection for Shved (despite a couple of chew-outs at the rookie during the second-half difficulties on Thursday).

Anyway, as every game recap has now detailed, Barea exploded for 14 fourth-quarter points in those last 10 minutes to quash the Thunder comeback and seal the Wolves’ victory.

“I wanted those two guys in the game,” Adelman said of Barea and Shved during his postgame comments. “J.J. is not afraid.”

But what Adelman said next reinforces the notion of how difficult this Wolves team will be to defend in the half-court this season. After getting torched by Love, Pek and Shved in the first half, OKC changed up its pattern. And Barea was a good counter to those changes.

“The way they were defending us, switching on all the pick-and-rolls, J.J. did a good job of understanding the big guy was waiting for him on the other side and the small guy was dropping under Pek,” Adelman explained. “He had nobody guarding him under the pick and he saw that three times in a row.”

It could be argued that inviting Barea to shoot in the fourth quarter of a tight game is not a bad strategy. But it is a losing argument for what happened on Thursday night.

MinnPost is taking its annual holiday hiatus after today, so I won’t be back with a proper column until 2013. I will be monitoring — and chiming in on — the comments section, however, should readers want to engage there. In any case, thanks to all readers for supporting the fledging endeavor at this new locale, and sincere wishes for a satisfying holiday period to close out the year.