The Minnesota Timberwolves have played just one game in the past six nights, a rare December oasis in the schedule. The break has enabled the team’s two injured stars, Kevin Love and Ricky Rubio, to get reconditioned and reacquainted with both each other and the upgraded roster personnel in a relatively leisurely and luxurious manner at this point in the season.

Love notoriously broke his shooting hand doing knuckle push-ups on Oct. 17 and was originally estimated to miss six to eight weeks because of the injury. This Wednesday will be exactly eight weeks since it happened, but Love bum-rushed his way back into action in five weeks, beginning Nov. 21 versus Denver. Since then, he has performed with the sporadic splendor of a uniquely gifted performer trying to regain his equilibrium.

The Wolves, who were 5-4 in his absence, are 4-5 since his return. The careening caliber of his play thus far is encapsulated in his last two games. Against the Celtics in Boston last Wednesday, he was throttled by Kevin Garnett and company into a 6-for-15 shooting performance that included just three baskets in six attempts right at the rim and a 1-for-5 display of clanking from three-point territory.

That’s not so different than Love’s overall numbers thus far this season — he’s shooting just 38.2 percent from the field and 21.6 percent from long range — and he acknowledged that the broken hand has affected his stroke.

Meanwhile, he was looking even more inept at the other end of the court, particularly during Boston’s decisive third-quarter surge when Brandon Bass befuddled him with fundamental midrange jumpers and baseline drives to the hoop.

“He was frustrated with his offense and he let that affect his defense,” says assistant coach Bill Bayno, whose emphasis is the Wolves’ defense. “But that’s just part of his road to maturity. He came back and played really well in the last game and has been really good in practice since then.”

Indeed, Friday night against Cleveland, with star points guards Kyrie Irving of the Cavs and Rubio of the Wolves both sidelined with injuries, the marquee matchup of the evening involved Love against Cleveland’s Anderson Varejao, the NBA’s leading rebounder this season, who, like Love, is known for his blue-collar work ethic.

Love annihilated Varejao, who came into the game averaging 15 points on better than 50 percent shooting, and finished with just 4 points while going 2-for-10 from the field. He did outrebound Love by a narrow 14-13 margin, a statistic dwarfed by the 34 points put up by Love, who overwhelmed a succession of Cleveland big men.

Initially, the assignment belonged to Tristan Thompson, as Cavs coach Byron Scott tried to keep Varejao out of foul trouble by cross-matching him against Nikola Pekovic at Cleveland’s defensive end. But eventually Varejao, Tyler Zeller and Samardo Samuels all had their fruitless stints trying to contain Love. At the end of the night, Thompson, Varejao and Zeller were all saddled with five fouls (Samardo added another two in just 6:49 of action) and Love had taken a whopping 18 trips to the free throw line, double the amount amassed by the entire Cavaliers team.

Perfecting the art of not fouling

The Love-generated dominance by Minnesota at the free throw line was the blatant reason for the Wolves’ victory. Cleveland matched Minnesota in field goals made (30) and points in the paint (38), was only minus-1 in fast break points (14-13) and minus-2 in second-chance points (12-10) and actually bested the Wolves in three-pointers made, 7-to-4. But Minnesota shot 27-for-35 from the line, compared with Cleveland’s 6-for-9, a 21-point difference in a game decided by 18 points.

After the game, Byron Scott ripped the officials for the disparity in fouls and free throws between the two teams, to the point where he was fined $25,000 by the NBA for his criticism. While his rant was understandable under the circumstances, the free throw disparity wasn’t an aberration for Minnesota. In fact, as I mentioned last Thursday, it’s been a secret key to the Wolves’ success thus far this season.

Only two teams, the Lakers and Thunder, generate more free throws than the 27.1 per game amassed by the Wolves (and the Lakers’ total is highly inflated by their opponents’ desire to send terrible free-throw shooter Dwight Howard to the line). And no team in the NBA limits teams to less than 20 free throws per game other than Minnesota at 19.78. The Wolves’ ability to avoid fouling is a significant reason why the team now ranks second only to Memphis in defensive efficiency (fewest points allowed per opponents’ possession).

“That’s been one of our goals since training camp,” says Bayno of the team’s “no foul, no harm” style of defense. We talk about contain and contest: You want to keep the man in front of you and just give up contested jump shots.

“But I think the biggest thing is preventing what we preach the players should do on offense: If you get contact, what we call ‘shoulder hits,’ you keep driving and use your inside shoulder. If you’re going right, [you would lead with] your left shoulder and if you’re going left it would be your right shoulder.

“And so conversely, when teams try to shoulder-hit us, we talk about getting off the body and just standing tall.” Here Bayno thrusts his shoulders back and puts his arms directly over his head. “We don’t bail them out by staying aggressive. Once they hit you, then you’ve got to back off a little and try to force a floater instead of fouling them every time by staying aggressive. I think we have smart players who have picked up on that.”

This is an especially shrewd strategy at a time when the NBA is making a conscious effort to reduce both flopping by defensive players trying to draw the charge and glaring aggression by offensive players simply trying to draw the shooting foul. Bayno agreed with my observation that forward Dante Cunningham and center Nikola Pekovic are among the best on the team at this contest-and-contain, then straighten-up tall procedure, and added guards Luke Ridnour and Alexey Shved to the list. 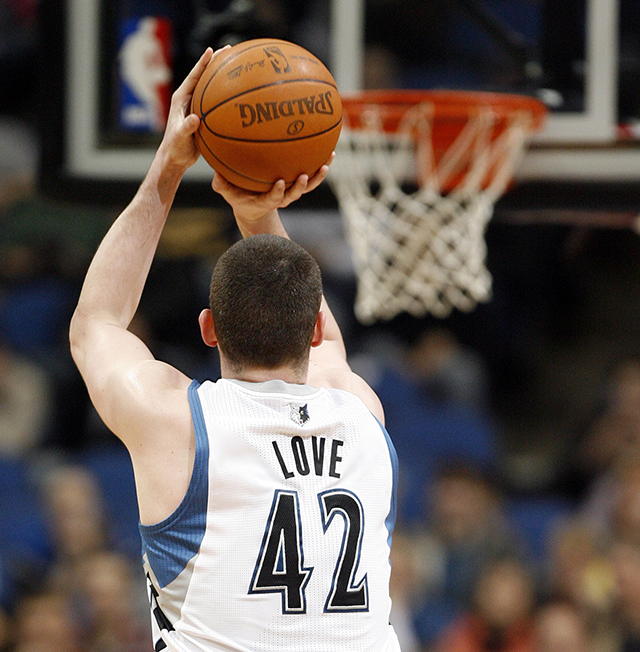 REUTERS/Eric MillerThe Kevin Love-generated dominance by Minnesota at the free throw line was the blatant reason for the Wolves’ victory over Cleveland.

What about Andrei Kirilenko? The Russian marvel, clearly the Wolves’ wing stopper and best overall performer on defense, has committed a mere 16 fouls in the 14 games he’s played thus far this season, an astoundingly low number for someone with his activity and responsibility at that end of the court.

“That’s all AK,” Bayno responds. “That’s just him being in the league forever. He’s as smart a player as there is, just a crafty vet who knows how to play without fouling.”

Kirilenko essentially confirms this when asked about his lack of fouling. “We’re trying not to give them easy points from the free throw line. So for the most part, I’m only going to foul when it is really necessary,” he says, as if it were just that simple.

But there is another reason for AK’s special expertise here. For 10 seasons, he played under coach Jerry Sloan in Utah, and Sloan’s philosophy was to switch off as infrequently as possible on pick-and-rolls and other set plays by opposing offenses. Consequently, Sloan’s teams were chronically among the league leaders in fouls committed, and while Kirilenko remained remarkably foul-free compared with his teammates, it was less obvious relative to the rest of the NBA.

Now that impediment is gone and Kirilenko is rivaling the fouling infrequency of Tayshaun Prince in his prime, who was arguably the best in NBA history in this particular category among wing stoppers. As he puts it, “I think switching really helps because in Jerry’s system we always stayed with our man, and that causes a couple of fouls when you maybe have to grab your man or cheat a little bit because of the screen.”

Sloan’s system may also be responsible for Kirilenko’s distinctively choppy gait. Long strides are counterproductive to your center of gravity and abrupt change in direction when you are trying to fight through or around picks to stay with your man. Along with the mincing steps that have become his trademark, being a wiry 6-9 and an 11-year veteran certainly doesn’t hurt.

“He uses his length so well, and it is contagious,” Bayno says. He also epitomizes what head coach Rick Adelman describes as the reason for his team’s lack of fouls: “For the most part, we are getting our position early. We don’t have a lot of shot blockers but we take up room.”

The upcoming game against Denver on Wednesday will provide a stiff test of the team’s ability to limit free throws. Coach George Karl’s team is almost always among the NBA leaders in free throw attempts. In their first meeting in late November, the Nuggets got to the line 26 times and sank six more free throws to account for almost all of their victorious seven-point margin.

“They are a great shoulder-hit team,” Bayno says. “They really do a great job of creating and drawing contact.” When it was mentioned that Denver beat the Wolves last time by launching skip passes (floor-width feeds from side to side) over a packed-in defense and hitting three-point jumpers to loosen up the Wolves, he replies, “You have to live with that with Denver. You want to force them to beat you with the three and if they make a few, your adjustment isn’t just to spread out and open up the paint. It is to close out harder on the shooter. The last time they got a little bit of both out of us, penetrating, then hitting threes, then penetrating again when we spread out.

“People guard things a lot of different ways,” Bayno continued. “No matter what your schemes, the bottom line is taking the paint away and contesting shots. I think [the Wolves] have bought into that, which is why we are where we are.

“Right now we are trying to challenge them. We put the defensive stats up in the locker room every Friday. The free throw attempts are up there, and we do defensive rebounding, field goal percentage defense and then the cumulative of where we rank. So we are trying to motivate them to take pride in the fact that they are buying in and it is paying off.”

And on the horizon is a guy named Rubio, who will improve the Wolves in myriad ways that I’ll touch on in Friday’s column, on the cusp of his expected return sometime this weekend — either Friday in New Orleans, or, more likely, at home Saturday against Dallas. But for now, let Bayno explain how the floppy-haired Spaniard will elevate what is already an effective defense.

“On defense, Ricky is all over the place. He guards the ball, he guards the weak side, he digs in the post, he gets deflections. He does a good job of pressuring the ball without fouling and he contests every shot. Last season earlier in the year, he was cutting off the drive, but then wasn’t recovering and was what we call ‘late jumping.’ You want to stay down with the shot fake and once they jump, you jump so you don’t give up a blow-by. After about the first week of the season, he had adjusted and almost every shot he defended was contested.

“He learns something from the film, he does it immediately. He’s a special kid that way.”