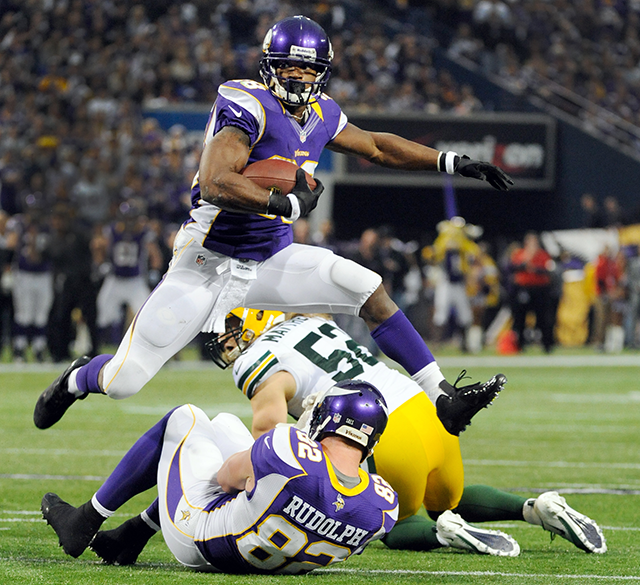 MinnPost photo by Craig LassigAdrian Peterson leaping over a blocker near the end zone during the first quarter of Sunday’s game.

Pro football is notorious for its violence and wildly enriched by it. But today in the strategy dens of the Green Bay Packers and Minnesota Vikings, it’s the mind games that are running at full ignition in advance of Saturday night’s playoff game in Green Bay.

Facing one of the most productive quarterbacks of the era, the Vikings are dealing with an   injury and depth problem in their pass defense centered on the virtually irreplaceable veteran, Antoine Winfield, who is struggling with a broken hand and whose availability Saturday night is not at all certain.

The Packers’ Aaron Rodgers nearly overtook the Vikings after Winfield left the game at the Metrodome Sunday. His primary replacement, Marcus Sherels, is agile running back punts and now kickoffs with Percy Harvin gone. But he’s no Winfield in pass defense. Not many people are.

So, the Vikings’ Plan A: The best defense against Aaron Rodgers is to keep the ball away from him.

And haven’t we seen this act before? Start with last Sunday at the Metrodome, where Adrian Peterson ran the ball 34 times for 199 yards and the Vikings beat the Packers 37-34.

Three weeks before in Green Bay, where Peterson ran for even more, 210 yards, but even that wasn’t enough as Rodgers lifted the Packers to a 23-14 win.

You can lather the game Sunday with a dozen subplots, which is always half the fun of any collision between these muscular neighbors. But what you can’t erase from it in the middle of winter are the weather, the hysterical fans and the stakes.

It’s all there Saturday night in Green Bay, with a kickoff at 7 p.m. Winner advances in the playoffs. Losers book flights for the Bahamas.

You want weather? Breathe (a little) easier, Minnesota. On New Year’s Day, they were forecasting nighttime temperatures around 18 degrees at game time (that’s ABOVE)  zero, with a chance of snow — but nothing close to the Ice Bowl of years ago when The Pack won a  championship in 17-below-zero weather.

So a winter’s night that is at least playable is significant for the dome- nurtured Vikings, who conduct their football at home under a tropical Teflon roof. A mythology has grown up in the National Football League, assuming that the Packers are invincible in playoff games in their open-to- all-blizzards Lambeau Field. But they lost in January as recently as a year ago when they were defeated by the New York Giants.

Would the absence of Antoine Winfield be an insurmountable loss to the Vikings?

Not necessarily. The Packers have their own injuries to worry about. They have a terrible time running the ball with any credibility, and Aaron Rodgers can’t hurt the Vikings if he doesn’t have the ball.

Which for the Vikings is the crux of the game: pounding the Packer defense, keeping Aaron Rodgers near the sideline heaters and doing it not only with Adrian Peterson but hopefully with a rehabilitated Christian Ponder. The team will need a Christian Ponder with his confidence restored by his performance in the crisis games of the last three weeks. That kind of diversity means running up first downs, and silencing Rodgers.

Although Peterson missed setting the single-season rushing record by just nine yards against the Packers, he needs no extra motivation Saturday. The core of his greatness as a running back and as a competitor is simply to be the best he can be, every game, every yard; a player as close to an absolute force of nature that the game has.

About the potential hazards of not having Winfield in condition to play with a broken hand, Coach Leslie Frazier clearly wasn’t giving anything away at his news conference earlier in the week. Winfield, he said, was “in quite a bit of pain” in last Sunday’s game, “We’ll have to see how he does throughout the week and make a decision.”

Coaches talk like that. It’s part of the game. But it’s also a given that Coach Mike McCarthy of the Packers would not be surprised to see Winfield running out there for the Vikings’ first defensive series. And what if it’s Marcus Sherels or A.J. Jefferson?

Aaron Rodgers will be the first to know. But there is one more card in the Viking strategic deck that usually evades the pre-game odds-setters: the prodigious field goal range of the Viking rookie Blair Walsh, one that practically no other contending team carries into the playoffs.  Walsh makes 55-yard field goals and beyond routinely. This means the Vikings don’t have to penetrate much more than the opponents’ 40-yard line to be sure of 3 points. It’s a huge strategic weapon in the tight games. That, coupled with the mediocrity of the Packer running game, makes the game close to even in the handicapping.

The difference going in is Rodgers. Pressure him hard, and it’s wide open. Any other difference? Well, yes. About 70,000 adoring cheeseheads roaring in sync. 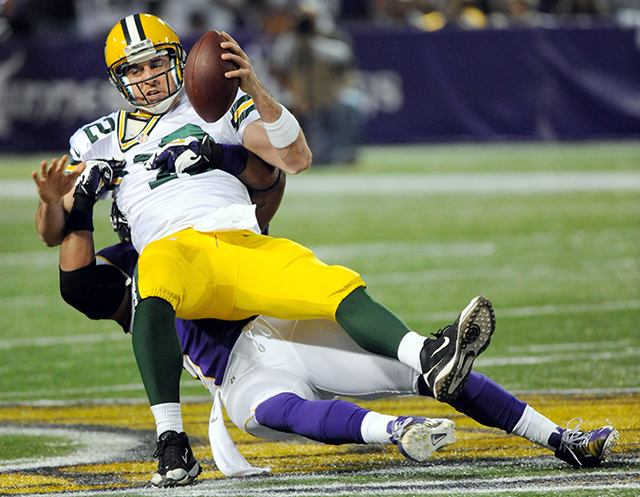 Win or lose, the Vikings emerged late as one of the successes, against all reasonable odds, of the NFL season. There was the surprising start, and then the saga of Adrian Peterson, the mid-season befuddlement of Christian Ponder and his later rehabilitation. One way or another, events in Green Bay will probably add to the rich store of history in the rivalry. How far back?

You may not mind the remembrances of an old typewriter-pounder of another century. Beginning in 1961, the early Vikings had routinely lost two games annually to the Packers. The Packers then were some of Vince Lombardi’s greatest: Paul Hornung, Bart Starr, Forrest Gregg, Max McGee, Jim Taylor, Ray Nitschke and Willie Davis.

In 1964, the Vikings trailed by two points with less than a minute to play. Fran Tarkenton took them down the field. It was fourth and forever from midfield. Tarkenton called a play that was superfluous because he was going to scramble to buy time. Tom Hall, a former University of Minnesota receiver, raced down the sidelines as the Vikings split end. Willie Davis pursued Tarkenton behind the line from here to there and back again, one loop, then another.

Davis was dragging and yelling for reinforcements; then Tarkenton threw. The Vikings’ tight end from Missouri, Gordy Smith, was oblivious to Tarkenton’s wild flight and had charged downfield to make himself available. Hounded by Davis, Tarkenton threw on the run.

The ball was coming down, 45 yards from scrimmage. The Packers had stationed three defensive backs in the midst of the spreading mess. Tom Hall timed his leap. Suddenly, somebody else was jumping for the ball, in the middle of the congestion. Fifty yards upfield Tarkenton yelled in horror, “No, Gordy, no!”

But Gordy Smith caught the ball and jumped out of bounds to stop the clock, Freddie Cox kicked a field goal on the last play and the Vikings had beaten the Packers for the first time.

That and Adrian Peterson.