If you watched more than a half of any of the four double-digit losses on the Minnesota Timberwolves’ horrendous road trip over the past six days, you saw a team bone-tired of being insufficient — a roll call of fading figures who are physically, emotionally and psychologically spent.

The Wolves are now in the throes of the downward spiral, where rationalizations and recriminations beckon like drugs, where acknowledging reality is defeatist behavior but rallying battle cries emerge as either kabuki theater for the mindless media maw or, if sincere, annoying flares of naiveté.

After a red-assed spanking at the hands of the San Antonio Spurs on Sunday night, Wolves veteran guard Luke Ridnour was exasperated. When a reporter proffered the hardly novel notion that too many injuries have robbed the team of the requisite resources to be competitive, Ridnour barked, “You know what, I’m tired of hearing that. Guys are out, so what? Everybody’s got guys out. We’ve got to find a way to win games. Whether guys are in or out, we still have to play 48 minutes. We’re all professionals. We have to find a way to get a win.”

OK, let’s take the bait. Luke Ridnour is the starting point guard. He actually had some flashes of solid performance on this road trip, which probably provided him with the internal standing and impetus to sound off. As kabuki for the maw, his timing and passion, dare I even say sincerity, were well delivered. It’s the kind of stuff that will linger in the lizard brain of pundits and accrue to his reputation as a “veteran locker room leader” months, even years, down the twilight trail of his career.

But if we seriously embrace the contextual framework posited by Ridnour in his outburst, the man is a laggard and a charlatan, unprofessional to the core. The four starting point guards who opposed him on this road trip absolutely ran roughshod over his miserable pretense at defense.

Averaging just 30:13 minutes per game during this road trip (blowout wins reduce playing time), the quartet of Russell Westbrook, Greivis Vasquez, Tony Parker and Darren Collison shot 55.4 percent from the field (31-for-56), 54.5 percent on three-pointers (6-for-11) and collectively averaged 21 points, 9 assists and 3.5 rebounds per game, with an assist-to-turnover ratio of 4-to-1.

For his part, Ridnour averaged a mere 28:31 minutes (blowout losses reduce playing time) and shot 46.3 from the field (19-for-41), 30.8 percent on three-pointers (4-for-13) and collectively averaged 12.8 points, 4.5 assists and 2 rebounds per game, with an assist-to-turnover ratio of 2.57-to-1. More importantly, he and the other professionals in the Wolves locker room didn’t find a way to win a single game.

Why pick on Ridnour? Because his comments play into a corrosive dynamic that assumes those of us who know and follow the game of basketball can be lied to in order to assuage the fairy-tale fantasies gripped tightly by those who prefer that a pat, inaccurate catechism about character, morality and competition trump a clear-headed appreciation of the actual blood, sweat, tears, sinew, savvy and strategy on display in every contest.

If Ridnour had merely been honest and copped to the fact that he wouldn’t even be starting if Ricky Rubio and Chase Budinger possessed four healthy knees, and that not all teams are blessed or cursed by the same significance and severity of injuries, and that no matter how hard you try, it is really difficult to win games when you are suddenly bereft of the best power forward in the NBA; then the yahoos would come roaring out of the woodwork, indignantly pointing to the millions in salary Luke collects each year and casting his losing, quitter’s attitude.

I’d like to think that what Ridnour is really tired of is having to engage in and further this kabuki sham. But maybe I’m giving him too much credit. 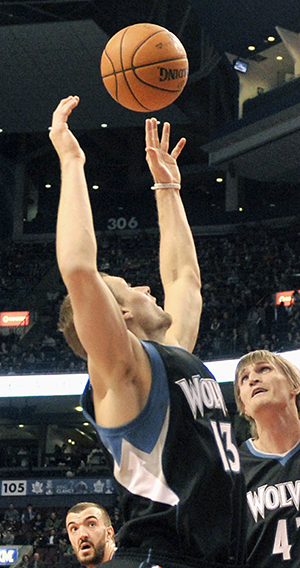 Could the Wolves have maybe stolen a game somewhere on this trip if substitute coach Terry Porter had given more minutes to his top scoring threat, Nikola Pekovic? Has the fitful but tangible growth in the game of Derrick Williams reached the risk/reward ratio where it makes sense to give him more minutes at the expense of the reliable but limited Dante Cunningham? Has Alexey Shved hit the rookie wall? Will Ricky Rubio ever learn to shoot accurately?

These are all viable questions worthy of discussion. But at the moment they miss the forest for the trees. The current circumstances are dramatic enough to warrant a more big-picture view.

For the majority of this season to date, the Wolves have played valiant, unselfish, synergistic basketball, overachieving on wins given the composite talent they were able to put on the court. But on this recent road trip, the toll from a relentless barrage of injuries reached the breaking point, driving the team into an ugly tailspin from exhaustion.

Let’s get specific. Quality basketball teams are assembled with complementary but well-defined roles for players whose value is slotted into a generally unspoken but usually unmistakable pecking order. Injuries simultaneously alter the roles and the pecking order placement of the remaining healthy players. A small or even moderate level of injuries can be fascinating for the way coaches and healthy players respond to this more fluid and challenging scenario. This is where some meaningful insight into character, attitude and motivation can be gleaned.

But if the changes in roles and pecking orders become too chronic and/or severe for the team to absorb, challenge yields to dysfunction, and dysfunction soon maxes out the already depleting reservoir of physical, mental and psychological energy a team can invest in a game. Then the team collapses.

That’s where the Wolves currently exist, in a state of collapse.

The airtight fundamentals of Andrei Kirilenko are not meant to be extended into him becoming a primary scorer or playmaker on this team for a lengthy period. As AK’s offensive game has become aggressive, his glue-guy defensive versatility has suffered. Shved is not meant to be a starting NBA shooting guard at this early stage of his career. He is being physically manhandled at both ends of the court, and the fatigue has caused him to gamble more on defense, shoot more awkwardly, delay the timing on his passes and not see the court as comprehensively as he did when less beleaguered. And so on down the roster.

The loss of Kevin Love is a terrible blow to this team in many ways. Most obviously, Love sits at the top of the Wolves’ pecking order. If he gets 19 points and 14 rebounds, his per-game averages this season, he still encounters legitimate questions about his commitment to defense and his inaccurate field goal percentage. On the court and in the media, the scrutiny he draws reduces the pressure on his teammates. He commands a double-team in the low post and must be accounted for out at the three-point line, spacing the floor for the playmaking guards and drawing opposing rebounders away from the hoop.

Then there are the less obvious advantages created by Love’s skill set. He notoriously complains to officials while his teammates race down the court to defend, so why are the Wolves suddenly yielding so many fast break points in his absence? (They were outscored 95-to-38 in that realm during the four games on the road.)

Most probably it is because of Love’s prowess as an offensive rebounder, which not only reduces the amount of times an opponent can initiate a fast break, but keeps their swingmen down near the hoop to contest the caroms and prevents their guards from leaking out too soon and too rapidly, lest Love grab the rebound and the Wolves suddenly have a 5-on-4 advantage in the half-court.

Another factor is the fatigue of the Wolves’ guards, who no longer operate in the greater spacing provided by Love’s presence, and no longer can “take a play off” by simply dishing it to their star and letting him go to work. Instead, they have to expend more energy in less space, siphoning energy on a group already compromised by a lack of height, or muscle, or two healthy knees — and further compromised by the losing and dysfunction that is now feeding on itself.

And so it goes. Teams collapse like a lung, when they are finally forced to exhale, when they are gasping from the exertion of added responsibility and then the overall level of dysfunction finally knocks the rest of the wind right out of them. It remains to be seen if the Wolves are ready yet to gather new breath, to respire with a second wind that will enable them to adjust to the new roles and challenges. It is a situation made more difficult by the knowledge that they are no longer plucky overachievers in the playoff chase.

They are still professionals who have to play for 48 minutes and find a way to win. And it is exasperating when they are not successful. But let’s not ignore the reality of this injury-ravaged season when assessing how things have gone so wrong.

Wolves in swoon: inept and exhausted