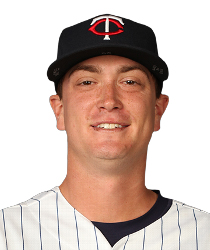 Baseball players don’t gawk. It’s one of those accepted rules of behavior, like bringing out the glove and cap of a teammate left on base, or spitting the shells of sunflower seeds everywhere but in the trash.

Twins closer Glen Perkins tried to avoid gawking as he measured the crowd at the Metropolitan Club, the glass-walled function room overlooking Target Field where the team held its annual media luncheon in late January. He failed. The Twins brought three prospects to the luncheon, and Perkins found himself staring up at two, both pitchers.

“I see Kyle Gibson,” Perkins said, meaning the 6-foot-6 righthander who stood in the middle of the room. “He’s the only one I know.” Then he nodded to his left. “That guy over there is really tall. I don’t know who he is.”

Try Alex Meyer, a 6-foot-9 righthander acquired from Washington for Denard Span last November. Compared with Meyer and Gibson, the third prospect in attendance, center fielder Aaron Hicks, felt like a runt at 6-foot-2. But it offered visual evidence of a big change in Twins thinking, one that predated Terry Ryan’s return to the general manager’s chair.

Meyer will not be the tallest Twin if he makes it to the major leagues; ex-Twin Jon Rauch beats him by two inches at 6-11. But he embodies the major-league trend toward taller and taller pitchers that Ryan embraced as he tried to restock his pitching-poor farm system.

At TwinsFest, the height of some pitchers left many Twins wondering if Ryan recruited a basketball team.

Meyer, who pitched in Class A last year, is the tallest. Ex-Met Mike Pelfrey stands 6-foot-7. Trevor May, one of the two pitchers picked up from Philadelphia for Ben Revere, is 6-foot-5. Throw in Twins farm products like Gibson, the 6-foot-7 Michael Tonkin and the 6-foot-5 B. J. Hermsen, and you get a lot of double-takes.

“We’ve been talking about it for the last day and a half,” center field candidate Darin Mastroianni, a comparative shrimp at 5-foot-11, said at TwinsFest. “At one point I was standing with Tonkin, Gibson, Meyer and May and thought, `These guys are monstrous.’ “

Lefthander Brian Duensing, listed at 6 feet, put it more succinctly. “I feel like a little (expletive),” he said.

Why taller? As Mastroianni explained it, the taller you are, the longer your stride, and the closer your hand gets to the plate when you release the ball. For a guy like Detroit’s 6-foot-8 Doug Fister, that means an 89 mph fastball arrives a little quicker than a batter expects.

You see this more dramatically when coaches throw batting practice in front of the mound, a gimmick to simulate major-league reaction time with high school varsity velocity. A tall guy need not throw as hard as Randy Johnson to be intimidating.

Unfortunately for the Twins, Gibson and Pelfrey are the only members of the Tall Brigade who might help this season. And both are returning from Tommy John surgery.

No wonder optimism about the Twins, coming off consecutive 90-loss seasons with a last-place finish in 2012, is as low as it has been since the 1990s. Dealing Span and Revere, two of the team’s most popular players, did not help, even though it addressed the organization’s biggest need — pitching. It leaves the Twins heading to spring training next week with questions at every position up the middle except catcher, and a rotation where 12-game winner Scott Diamond is the only credible holdover.

If this smells like another last-place finish waiting to happen, there’s nothing wrong with your nose. That “whump” you heard was the sound of thousands of frontrunners jumping off the bandwagon.

Even with 2014 All-Star Game tickets as a hook, only 81 percent of season ticket holders renewed, by far the smallest retention rate since Target Field opened in 2010. Some who did renew bought fewer tickets. Club President Dave St. Peter said the season ticket base dropped to a little more than 19,000, down almost 6,000 from 2011, when the Twins cut off sales at 25,000.

“In certain markets, it would have been a lot worse,” St. Peter said. “I think we stopped the bleeding. Now we need to demonstrate to people we can restore the winning tradition.”

The Ryan rebuilding plan is straightforward: Emphasize pitching, acquire all you can, bring everybody to spring training and see who emerges from the competition. Big-name signings sell tickets, but that’s not his way, and this wasn’t a stellar year for free agent pitchers anyway. So Ryan stuck with the Nordstrom Rack approach, spreading his resources around, looking for bargains. He couldn’t fix everything, which is why Pedro Florimon might be the shortstop even if he can’t outhit Drew Butera.

Ryan never intended to trade both Span and Revere. According to Twins officials, after the Span deal, the Phillies were among several teams who checked back with Ryan and said in effect, ‘No chance you’ll move Revere now, right?’ Ryan’s answer: “Make us an offer.” That landed Vance Worley, a National League Rookie of the Year contender in 2011 (he finished third, going 11-3 with a 3.01 ERA), and May, who averaged 11.1 strikeouts per nine innings in five minor-league seasons.

Worley is a character, the kind Ryan usually avoids. Nicknamed “Vanimal” by a strength coach at Long Beach State for his morning workout regimen, Worley walked around TwinsFest with stylish black glasses and a faux hawk haircut like a less-maniacal Ricky Vaughn, the Charlie Sheen character from the 1989 film “Major League.”

He slipped to 6-9 last year before undergoing elbow surgery to remove a bone spur. Troubling: His fastball velocity dropped the last three seasons, from 91.5 mph to 89.9 mph, and he doesn’t draw many swinging strikes. Encouraging: He allowed 0.8 homers per nine innings while pitching half the time in homer-friendly Citizens Bank Park. (Statistics from fangraphs.com.)

The Twins blogosphere hammered Ryan for giving a two-year, $10 million deal to Kevin Correia, a 32-year-old ground ball pitcher who was 46-43 the last four seasons with San Diego and Pittsburgh. Ryan insisted Correia wouldn’t take a one-year deal. The fear is that Ryan gave $10 million to Jason Marquis’s clone. The real issue: Pitchers like this ought to come out of your farm system. But the Scott Baker/Kevin Slowey/Nick Blackburn/Duensing generation underperformed, in part because of injuries, while Perkins and Anthony Swarzak proved better suited for relief.

Why Correia? Because he averaged 5.6 innings pitched in 159 career starts. That’s not great, but it’s better than most of the stiffs the Twins trotted out last year.  Twins starters ranked last in the American League in innings pitched (880 innings, or 5.4 per start) and ERA (5.40).

Liam Hendricks, Sam Deduno and Cole De Vries may slip in if anyone falters. Ex-Oakland standout Rich Harden, out all last season with right rotator cuff surgery, could land in the bullpen or Class AAA Rochester. Blackburn, who pitched himself off the 40-man roster last year, had right wrist surgery in January and won’t be ready until March.

From this mix of veterans, kids and retreads, the Twins seek guys who can average six innings per start, then turn things over to a bullpen that performed better than expected last year. It’s not a world championship plan, but it’s a start.

“Last year, the bullpen ended up wearing down as the season went along,” Perkins said. “We got some guys who can soak up innings. We needed that. I think we’re going to be fine.”

The other tall guys can’t help right away. May (10-13, 4.87 ERA for Class AA Reading) is farther along than Meyer, a hard-throwing first-round pick who struck out 139 in 129 innings at two Class A stops for Washington last year. Hermsen and Tonkin are probably two years away.

Something else to keep in mind: The reshuffled coaching staff added Bobby Cuellar, the veteran major and minor-league pitching coach who guided Cy Young Award winners Randy Johnson in Seattle (1995) and Pedro Martinez in Montreal (1997) before helping a third, Johan Santana, develop his change-up in the Twins system. Cuellar handles the bullpen, replacing the fired Rick Stelmaszek.

Meanwhile, Hall of Famer Paul Molitor said new bench coach Terry Steinbach understands pitching and explains it more clearly than anyone he ever played with. Cuellar, Steinbach and pitching coach Rick Anderson give the Twins three smart voices to handle the neediest part of the roster. That may be Ryan’s savviest move of all.