Certain people, certain athletes, handle things with a dignity and grace so genuine that few question their believability.  Forward Maya Moore of the Lynx, named to the All-WNBA First Team along with teammate Lindsay Whalen on Wednesday, carries herself that way.

Moore has a knack for consistently saying the right thing, free of bluster, even at times when many of us might be tempted to blurt something stupid.

Last month offered a telling example. The Lynx, the WNBA’s best team, pounded the New York Liberty 88-57 at the Target Center on Aug. 18, with Moore scoring 28 points while hitting a league season-best six 3-pointers. Bill Laimbeer, the former Detroit Pistons bad boy tuned coach and general manager of the Liberty, felt Lynx coach Cheryl Reeve, his former assistant with the Detroit Shock, left Moore on the floor long past the point when the outcome was in doubt. So he said so.

“I was a little disappointed when they left Maya Moore in the game to try and get Player of the Week again when the game was out of control,” Laimbeer said, according to Fox Sports North. “She should get hurt for that.”

For the record, Moore played a little more than 36 minutes in a 40-minute game that saw the Lynx lead 65-45 after three quarters. Moore sank two 3-pointers and a two-point jumper in the fourth quarter before coming out with 3:42 to play and Lynx up, 81-54.

The Lynx certainly did not need Moore on the floor those extra minutes. But wishing injury to an opponent under any circumstances ranks as obnoxious. That’s Laimbeer, formerly one of the NBA’s most notorious agitators. The number of players who punched Laimbeer, or wanted to, could fill a Greyhound terminal. The league fined Laimbeer an undisclosed amount a few days later.

Moore’s reaction? Nothing. She declined to criticize Laimbeer after it happened. She never mentioned it on her Twitter account. And with the Lynx preparing to open their best-of-three Western Conference finals series with Phoenix on Thursday night at the Target Center, Moore brushed it off again after practice Wednesday.

“Opinions are very easily heard in our media and technology-type of world that we’re in,” Moore said. “I just try to stay focused on the people that I’m around every day that I work with, that I trust and value.

“As far as basketball goes, people saying things is nothing new to sports. I just try to make sure, in everything I do, I do what I’m supposed to be doing in a confident and a humble way at the same time. It’s been working for me.”

See? Someone like feisty Phoenix guard Diana Taurasi — like Moore a University of Connecticut product — might have been a lot less gracious. “I think D would have probably knocked some teeth out, elbowed somebody,” said Lynx guard Seimone Augustus.

Reeve said she never addressed Laimbeer’s comment with Moore or the players. Curiously, she said she told angry Lynx fans to pretend it never happened.

“I knew Bill was very frustrated by what just took place,” Reeve said. “Having worked for him, I understood. And at the same time, the other part of it with Bill Laimbeer is, ignoring what he says is more powerful than giving it attention. That’s what I told our fans: ‘Don’t pay attention to Bill.’ I think that’s the best way you deal with it.”

Moore’s teammates chose not to make an issue of it either, except Augustus, who couldn’t resist a playful shot at Laimbeer.

“Bill’s an old hag,” she said. “He’s just mad, you know? Bill’s so used to winning, and now he’s in a position that he’s never been in before, where he’s rebuilding and trying to get to that point. I think it was kind of [directed] toward Coach Reeve and the success that she’s having.

“He can’t get mad at Maya having a great night. It happens. But the comment that she should have got hurt or something like, that was a little over the top.” 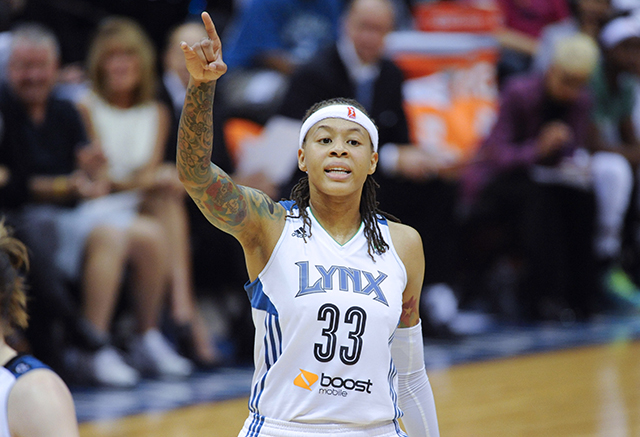 MinnPost photo by Craig LassigIt is not an accident that Moore’s arrival here in 2011 coincided with the Lynx’s ascension to WNBA elite. But this is still Seimone Augustus’ team.

Meantime, Moore moved on to complete the best of her three seasons as a pro. She finished third in the WNBA in scoring (18.5 points per game) and became the first WNBA player to lead the league in 3-point baskets (72) and 3-point accuracy (45.3 percent, also a Lynx record) in the same season. That helped the Lynx finish 26-8 and earn home court advantage throughout the playoffs. In a close vote, Moore finished second to Candace Parker of Los Angeles as league Most Valuable Player.

“She’s so versatile,” Seattle Storm Coach Brian Agler said after Moore dropped 30 points on his team Aug. 31. “She can catch and shoot. She’s posting up, one dribble and shoot. She’s feeling it right now, and really good players get to that. I’ve seen Augustus get like that. Tina Thompson [of the Storm] can get like that. The great ones have that knack. They can elevate their game, and she’s obviously in that groove right now.”

Moore steps up on defense

Going into this season, Reeve challenged Moore to improve her perimeter defense and her decision-making with the ball. Opponents often targeted Moore as the weak link in Minnesota’s defense, going after her instead of the tenacious Augustus, with the added incentive of getting her in foul trouble and out of the game. Now, Reeve said, Moore positions herself better to pressure a ball-handler and deflect passes.

“Her defense has taken the step that was necessary for us to be successful,” Reeve said. “And then offensively, she’s become really dynamic in the way that she scores. Obviously, she shoots the 3. Everybody knows that. But she’s really been proficient at posting up down low, and taking contact.

“Those two steps have been really important, and we need her to be just as good the rest of these playoffs.”

It is not an accident that Moore’s arrival here as the overall No. 1 draft pick in 2011 coincided with the Lynx’s ascension to WNBA elite, winning a league title her rookie season and returning to the finals last year. But this is still Augustus’ team. It was Augustus who demanded, took and made the game-deciding shot that eliminated Seattle in Game 2 of the Western Conference semifinals.

It will be Moore’s team soon enough. For now, she has forged a place for herself within the Lynx version of a Core Four — Moore, Augustus, Whalen and underappreciated forward Rebekkah Brunson.

The Mercury, with Taurasi, 6-foot-8 rookie center Brittney Griner and veteran Penny Taylor healthy, figure to be much tougher than they were in regular season. The Lynx swept five games, all before the All-Star Break, with three blowouts. The Mercury rallied after coach and general manager Corey Gaines was fired in early August.

“They’re been through a great journey, having a coaching change,” Moore said. “I’m sure they have a lot of motivation. They’ve been through so much that they’re just going to continue to band together and grind it out. So we have to be ready for a very tight group that feels it can overcome everything.”