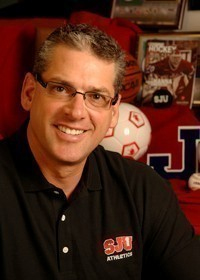 COLLEGEVILLE — Tom Stock, the energetic athletic director at St. John’s University, keeps in his office a large rectangular floor fan, which whirred along on a particularly hot day last week. The athletic administration wing of the Warner Palaestra, which opened in 1974, is air-conditioned. But the really muggy days, Stock said, require a little more. Instead of lowering the thermostat, he runs a fan, which costs less to use.

Stock said this without apology or embarrassment. Stretching every dollar is paramount in Division III athletics, and St. John’s, one of 13 institutions in the Minnesota Intercollegiate Athletic Conference, has done it successfully for decades.

Division III may be the last uncorrupted corner of the NCAA, a land where there are no athletic scholarships, and schools don’t move football games to 10 p.m. on Wednesdays to chase a fat check from ESPN.

MIAC football games still kick off Saturdays at 1 p.m. or thereabouts. The camaraderie, before and after, among fans and players is authentic. They know they share something special. At the risk of sounding like a cheerleader, there are a lot worse ways to spend eight bucks on a brisk fall afternoon.

But even Division III football has seen its version of the economic arms race that leaves Division I-A such a mess.

Offensive coordinators aren’t paid $500,000, and most head coaches outside of football and basketball still juggle multiple jobs. Yet the race for facilities separates D-III schools into Haves and Have Nots. And St. John’s, with its 60-year football tradition under the now-retired John Gagliardi, is determined to remain a Have.

“We absolutely expect to compete with the very best Division III programs in all sports, as we have for the past 60 years,” university President Michael Hemesath, a former economics professor at Carleton, said in an email.

The fitness center is an important catch-up piece. Alumni and fans who drive to St. Paul on Saturday for the Johnnies’ annual tussle with arch-rival St. Thomas will get an up-close look at what put them behind — the $52 million Anderson Athletic and Recreation Complex, which opened in 2010 and rises behind O’Shaughnessy Stadium. 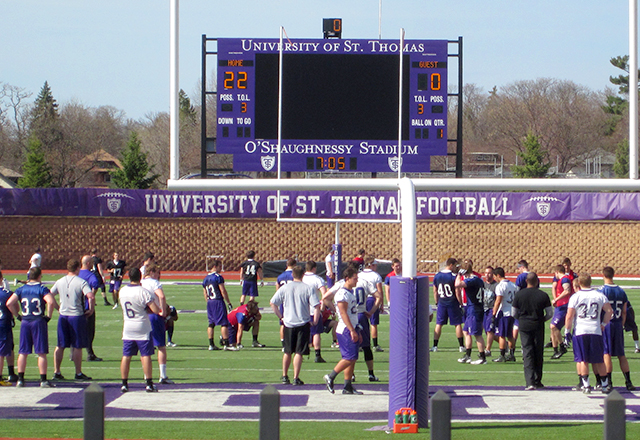 MinnPost photo by Corey AndersonSt. John’s will meet their arch-rivals this Saturday at O’Shaughnessy Stadium on the St. Thomas campus in St. Paul.

Besides a basketball arena, an indoor track and a swimming pool — all of which St. John’s already has — the 180,000-square-foot structure features a massive fitness center and weight room open to all students, staff, faculty and alumni. More and more institutions, regardless of size, are building health club-type facilities like this to attract students in all disciplines, not necessarily varsity athletes.

The McGlynn Fitness Center at St. John’s, at about 5,600 square feet, appears inadequate by comparison, even after the school spent $100,000 on additional weight equipment. It lags behind newer facilities at Mount Union and Wisconsin-Whitewater, the two schools that split the last eight NCAA D-III football championships. Even Macalester College, where intercollegiate athletics aren’t a big deal, boasts a 9,000-square-foot fitness center inside the $45 million Leonard Center that opened in 2008.

Other than that, St. John’s facilities stack up well in the MIAC, from pastoral Clemens Stadium to a refurbished locker room to the Spectrum indoor practice facility. That’s why, in a fund-raising brochure on the St. John’s football website, Stock is quoted as saying that St. John’s doesn’t need a new $52 million complex. The direct reference to St. Thomas likely plays well with Johnnie alums, but Stock seemed uncomfortable talking about it.

“I don’t want to get heavy into that, but the truth is, we don’t [need a new complex],” Stock said. “We have a pretty good set of facilities here. We’re trying to massage and upgrade so we’re poised to be competitive for the next 15 years, just as we did in 1997 when we built the Spectrum and upgraded Clemens Stadium. That carried us quite far.”

Given Gagliardi’s legendary indifference to weight training, it’s not surprising St. John’s fell behind here. In a phone interview with Gagliardi the day he retired, he told me, “Maybe it was important, but I’ve never been convinced it’s important. It might make you stronger, but to me, it doesn’t make you quicker or throw a pass harder.” 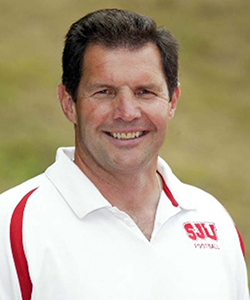 That philosophy changed under new head coach Gary Fasching, who spent 17 years as a Gagliardi defensive assistant. St. John’s hired Justin Rost as its first strength and conditioning coach as well as an assistant athletic trainer, cobbling funds from student activities fees and other sources, Stock said. (Rost will work with varsity and intramural athletes.) The practice bubble, which will eliminate congestion in the Spectrum, and the larger fitness center, will help, too.

“When we have those things, we’re going to have great facilities,” said Fasching, who also ran the fitness center and coached track until succeeding Gagliardi. “I don’t know that we need any more than that.

“It’s always nice to have more. Here, we’ve kind of worked under the premise that we do more with less than anybody else. We’ve always been real good stewards at St. John’s. I know John was. Obviously facilities mean something to kids. But you look at what we have here, nobody has what we have here. We have an incredible setting here at St. John’s that nobody else can even match.”

College presidents like to call athletics the front porch of a university, meaning that’s how prospective students hear about it before learning what it offers academically. Thanks to Gagliardi, who retired last fall with more victories than any coach at any level in NCAA history (489), football provided that entry point for St. John’s.

Saint John’s Johnnie AthleticsClemens Stadium, famed for its blanket-friendly berms long before such things were cool, provides one of college football’s neatest venues.

The little Benedictine school in the woods northwest of St. Cloud has its own exit off Interstate-94, and the top of the immense abbey church built in the 1970s can be seen from the highway.

Clemens Stadium, famed for its blanket-friendly berms long before such things were cool, provides one of college football’s neatest venues. St. John’s topped D-III in average attendance 11 of the last 12 years and 15 of 20. The biennial Johnnies-Tommies game at Clemens always draws a big crowd; a D-III record 16,421 turned out in 2010, more than double the listed capacity of 7,482. Stadium improvements since 1997 include more seating, artificial turf, chairbacks for season-ticket holders and five luxury suites atop the press box.

“A recent review of our athletic department revealed that we have exceptional facilities and staff at Saint John’s University compared to our peer institutions,” Hemesath said in an email. “We remain committed to excellent facilities and excellent people. Our most recent investments in athletic facilities are fully consistent with those priorities as well as our broader learning and mission values.”

Saturday’s clash between the Johnnies and Tommies, both 2-0, will be the first without Gagliardi since 1952. The rise of St. Thomas as a national contender under Coach Glenn Caruso may have hastened alumni calls for the 86-year-old Gagliardi, who won the last of his four national titles in 2003, to step down. After Gagliardi won his 27th and final MIAC title in 2009, St. John’s slipped slightly to 7-3, 6-4 and 5-5 the next three seasons, losing to the Tommies each year. 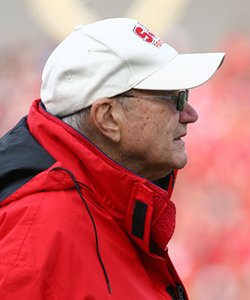 Gagliardi remains revered in Collegeville. He still has his old office, which Fasching refused to take, likening it to a museum. But Fasching made two subtle changes to address issues.

St. John’s never practiced longer than 90 minutes; that was one of Gagliardi’s famous “No’s.”  Now the Johnnies go two hours on Tuesdays and Wednesdays, devoting the extra time to individual work and fundamentals. And they practice at a faster tempo to improve conditioning and stamina.

And while Fasching kept Gagliardi’s staff, he brought in former Carleton College head coach and Johnnies quarterback Kurt Ramler, a finalist for the head coaching job, as offensive coordinator. That meant reassigning Gagliardi’s son Jim, who Gagliardi preferred to succeed him, to a lesser assistant’s role.

“A lot of times when you take over for somebody, it’s because the program was in shambles and the guy got fired or whatever,” Fasching said. “That wasn’t the case here. Having played for John and having coached with him for 17 years, I saw the way he ran a program. I didn’t feel like I had to change much, and I didn’t change much.”