The Minnesota Timberwolves are going through “growing pains,” so-named because the process is frustrating and seems so unnecessary, yet ultimately provides hope that a lesson is being learned well enough to strengthen the team’s character.

All season long the Wolves had been front-runners, never capturing a game they trailed heading into the final stanza, or surmounting anything greater than a six-point deficit during their first 21 games of the 2013-14 campaign. They have flashed enormous offensive talent and been smart enough at positioning, feints and referee impressions to generate a free throw differential of plus-218 over their opponents — almost exactly 10 extra shots at the charity stripe per game. But they have also been lackadaisical and smug about their skills and their goals, as if their perceptions about “what it takes to win” are flawed enough to omit raw gumption.

We heard so much about the team’s brutal early schedule, especially from coach Rick Adelman, that one might imagine that the Wolves had no choice but to be outhustled out of two wins by the Denver Nuggets, commit a second-half collapse against the then-floundering Washington Wizards, and pretty much decide to be embarrassed by the champion Miami Heat because Kevin Love didn’t play.

Wolves’ loyalists had pegged the team’s return to form to occur right after that Miami debacle, when Adelman would finally get some time to remind and reacquaint the players with the disciplined strengths of his offense and Minnesota would get the chance to play the lesser lights in the squalid Eastern Conference.

The Wolves complied with those expectations by blowing out the Detroit Pistons on the road, 121-94, as Kevin Love and Nikola Pekovic grounded-and-pounded Detroit’s Greg Monroe and Andre Drummond into mincemeat in the ballyhooed matchup of rugged frontcourt duos, while cockeyed-shooting point guards Ricky Rubio and J.J. Barea not only dished for 15 assists without a single turnover, but knocked down 9-of-17 field goal attempts besides.

Next up were the lowly, palpably rebuilding Philadelphia 76ers, featuring a cast of players relegated to roles that dwarf their capabilities — and sitting their star rookie, Michael Carter-Williams, because of a minor infection. Yes, it was the tail end of a back-to-back, a situation that had dealt the Wolves five losses against one lone win thus far this season. But having plunged from a record of 5-2 down to 10-11 by failing to stitch together consecutive wins since the first full week of the season, the Wolves had something to prove to skeptics and themselves, while playing at home in a game almost automatically checked off as a win in any prognostication of their schedule.

What’s the opposite of a killer instinct — a mewling fatalism? That’s the way the Wolves played defense in the first quarter. Backpedaling to ensure Philadelphia a comfortable cushion on every jumper, Minnesota allowed the Sixers to shoot 77 percent from the field and 75 percent from three-point territory. They yielded 15 fast-break points in 12 minutes and permitted a 16-0 run in the final three minutes of the quarter, cratering into a 39-20 deficit.

Three quarters later, we could chalk up that lackluster effort to growing pains. Because for the first time in this checkered, frustrating season, the Wolves displayed the grit and character required to surmount formidable (albeit mostly self-imposed) adversity.

On the plus side, the method to their latest victory has become familiar. After being outrebounded 15-7 in that dreadful first quarter, Minnesota owned the boards the rest of the way, especially on the offensive glass, where they grabbed 13 of their own missed shots versus 19 defensive rebounds for the Sixers in the final three periods. At the other end, Minnesota took care of their defensive glass by a rebounding margin of 25-3 in the last three quarters.

Other positive trends have been even more pervasive. The Wolves generate the second-most turnovers in the NBA and hounded the Sixers into 26 of them during Wednesday night’s game. And they relied on their real bread-and-butter, free-throw disparity, whacking that 19-point first-quarter deficit down to 3 by taking 20 free throws (and making 18) in the middle two periods versus just three free throws (all made) by Philadelphia. 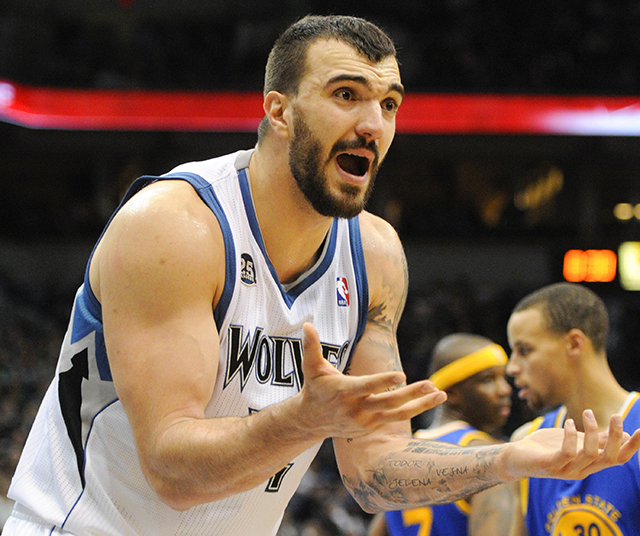 MinnPhoto by Craig LassigNikola Pekovic is probably the most underrated member of the team.

By the end of the night, the Wolves had emerged with a hard-fought win that was simultaneously hopeful and disconcerting, as is the team’s .500 record and 10th place seeding in the West more than a quarter of the way through the season.

Led by sharpshooting Robbie Hummel, the bench provided a rare spark and capturing both ends of a back-to-back set of games is a solid result regardless of the competition. But as Adelman remarked after the game, in reference to motivating his troops after that horrendous start, “It’s pretty obvious. You shouldn’t have to say anything … We have to learn a lesson. You get a nice win last night [meaning Tuesday, versus Detroit], it means nothing tonight.”

In praise of Pekovic

To banish the churlish pall I’ve cast on this column despite the Wolves’ two-game winning streak, let’s close with a salute to fourth-year center Nikola Pekovic, who is probably the most underrated member of the team.

Underrated does not mean under-appreciated, of course. Pek is understandably one of the most popular and beloved players in town. You’d have to be a humorless jerk not to get a kick out of the stark contrast he presents — his massive, chiseled physique, luridly gothic tattoos and movie-villain visage, juxtaposed with a whimsically playful streak that has him favoring Mickey Mouse T-shirts and starring in scoreboard skits while exuding a vibe of gentle kindness and live-and-let-live equanimity.

But within the ink-stained gristle and attitudinal ham on wry is a dedicated pro who has increased his minutes and refined his game every year he’s been in the league. Pek was the living caricature of the foul-prone, muscle-bound stumblebum his rookie season. Today he is arguably the most reliable offensive low-post presence in the NBA.

Pek currently leads the league in “close touches per game,” defined by the stats page at nba.com as “all touches that originate within 12 feet of the basket, excluding drives.”  Among the top 10 in that category, Pek has the lowest time of possession, meaning he gets the feed from a teammate and immediately goes to work.

Inevitably, we fail to notice the keys to Pek’s offensive accomplishments. The overwhelming majority of his shot attempts — 239 of his 272 missives — occur within 8 feet of the basket, at a 55.6 percent success rate that is merely roughly in line with the league average from that close distance. In other words, we’ve all seen Pek miss his fair share of bunnies in the paint.

Yet what is much less apparent is what Pek does to make himself the most constant recipient of those low-post feeds. His raw strength is an important component, of course. But during his time in the NBA, Pek has dramatically improved his footwork both before and after he seizes the ball. He has become adept at working the angle between the feeder and the basket so as to seal his opponent away from both intercepting the ball and blocking his shot. He has added different ways of getting off contested shots — a baby hook, an up-and-under, even a modified set shot to slightly expand his range.

Pek is an ideal complement to Kevin Love on the Wolves front line. His back-to-the-basket game is rugged and refined enough that he almost always commands a double-team down in the low post, freeing up space on the perimeter for three-pointers from Love and the rest of the Wolves. In turn, Love’s ability to draw front-court defenders away from the rim frees up Pek for shots and, more importantly, offensive rebounds in the paint.

Pek currently ranks sixth in the NBA in that category, a somewhat remarkable achievement given that his teammate Love is a rebounding fiend who is fourth in offensive rebounding in his own right. In light of the five-year, $60-million contract Pek signed this summer, it is also reassuring that the return of Love to full-time duty after last year’s injury-marred season hasn’t affected his offensive prowess; his points-per-minute is only a titch below what it was in 2012-13.

Pek’s offensive reliability has enabled Adelman to compensate for his weak bench by keeping his burly big man out on the floor with the subs, especially at the beginning of the fourth quarter when Love typically rests. This occurs even though backup point guard J.J. Barea lacks the physical ability to effectively deliver the ball to Pek’s nesting ground in the low post.

Just seven of Pek’s 142 baskets have been assisted by Barea this season, despite the fact that the point guard and the center have shared the floor for 205 minutes. Only Dante Cunningham has played more minutes with Barea than has Pek this season, yet Barea’s assist-per-minute to Pek is lower than his total with any other starter but Corey Brewer, who is customarily the fifth option in the half-court sets. Barea is far more likely to feed Cunningham for a midrange jumper than Pek for a layup when the trio share the court. Barea’s 28 assists to Cunningham are quadruple his total to Pek, while Barea’s minutes with Cunningham are less than double his playing time with Pekovic.

But it is on defense where Pek is truly underrated. As I have said before, Bill Bayno, the Wolves’ former assistant coach in charge of defense, maintained that Pek was the team’s best pick-and-roll defender. (I don’t know if the current assistant coaches share Bayno’s opinion, because beat writers are barred from talking to assistant coaches since Flip Saunders took over as president of basketball operations this season.)

If you pay attention to defensive strategies and rotations, Pek is clearly the most active and aggressive about “showing hard” — coming out defiantly to impede the dribbler — on the pick and roll play. At times this season, opponents have exploited that aggressiveness with baseline cuts that result in lobs or bounce passes for easy baskets, but without knowing the schemes, it is difficult to know if Pek is being too aggressive or his teammates aren’t rotating quickly or adequately.

What is apparent, however, is that Pek prevents more layups from dribble penetration than anyone on the team, and does so without fouling, a crucial component of the Wolves’ identity. Whereas Love will often cede a layup rather than even risk the foul, Pek’s anticipation and positioning on non-pick-and-roll plays frequently offers a physical deterrence without drawing the whistle.

During his four years in the league, Pek’s fouls-per 36 minutes have steadily trended downward — from 7.3 to 2.8 to 2.6 to 2.3 this season — without any abatement in his proactive aggression. And at the other end of the floor, Pek’s turnovers per 36 minutes have likewise plummeted steadily, from 3.7 to 2.5 to 1.9 to 1.8 this season.

Few fouls and few turnovers despite being one of the most constant combatants in the NBA grind beneath the hoop — that’s Pek, the ever-improving gentle giant helping the Wolves, however painfully, grow up.