Taking someone under your wing sometimes can leave bruises.

The 21-year old Dantas speaks the Portuguese of her native Brazil, a little Spanish, and a little less English. So to bridge the language gap, McCarville, her teammates and the coaches whip out their smartphones and open the Google Translate app.

Often, McCarville types in an English word or phrase and shows the Portuguese translation to Dantas. The wording isn’t always precise — “She’ll give you a funny look, like, ‘What?’” McCarville said — but Dantas usually gets the gist.

Last week, Lynx and Timberwolves owner Glen Taylor hosted his annual preseason team dinner at his home in Mankato. Dantas grabbed a seat next to McCarville, leaning on her new friend to provide real-time translation of the table conversation. McCarville may be fast, but she’s not a stenographer. Things quickly got out of hand.

“She was elbowing me every two seconds, but I couldn’t type and translate as fast as everyone was talking,” McCarville said after practice Wednesday at Minneapolis Community and Technical College. “She kept elbowing me and elbowing me, and I’m like, ‘Dee, calm down.’”

Ah, a rare moment of panic from the normally calma Dantas. Listed at 6-4 but probably a little shorter, Dantas handled her first two starts at power forward for the injured Rebekkah Brunson (right knee surgery) without visible jitters.

Dantas contributed 12 rebounds and five assists in the opener last Friday night in Washington, totals reached in a WNBA debut only by future two-time MVP Candace Parker, in 2008. Dantas added six points, all in the final 6:13, as the Lynx pulled away to win, 89-77.

Then Sunday, against Connecticut at the Target Center, Dantas put up 10 points and nine rebounds, just missing her first double-double. Dantas shifted to center in the fourth quarter after McCarville sprained her left ankle yet rarely seemed overmatched in the 90-87 Lynx overtime victory. The Lynx aren’t asking Dantas to do much more than rebound and defend, but she hasn’t missed a shot from the field yet, going 7-for-7.

“She’s not 6-foot-4 but she’s close enough for me,” said Lynx assistant coach Jim Peterson, who works with the post players. “She plays big. And look how poised she is. Without Janel McCarville, she becomes our main facilitator in the post. We’ve been throwing a ton at her, and she’s taken everything and knocked it out of the park.”

Peterson and head coach Cheryl Reeve raved about Dantas’s basketball smarts and confidence, both on display late in the Washington game. In the fourth quarter, McCarville twice hit jump shots on set plays after setting high-post screens for Lindsay Whalen. With less than 1:20 to play and the Lynx leading by eight, McCarville urged Dantas to move up as the screener, figuring the play might work again against a different defender.

Instead of handing the ball to Whalen, the primary option, Dantas faked the handoff, pulled the ball back and hit a short jumper herself. “Moxie,” said Reeve, grinning.

The basket put the Lynx up by 10 with 1:10 to play, and led Washington Coach Mike Thibault to call a 20-second timeout.

“I had that moment where I was just as excited as the players,” Reeve said. “I wanted to go chest-bump her. That was really cool.

“We always tell them, ‘Make a decision and do it.’ If you’re kind of passive and unsure of yourself, then we’re probably not going to want it. But she did it with great conviction. Even if it didn’t go in, there was no way to be mad at her for the decision. I love the confidence that she has, and obviously her teammates have in her.”

Reeve had never seen Dantas play in person when the Lynx drafted her as a 19-year-old in 2012, with the second of two first-round picks. (That’s the draft where the Lynx took Devereaux Peters third overall, with a pick acquired from Washington for Nicky Anosike.) But the Lynx knew plenty about her through overseas contacts. 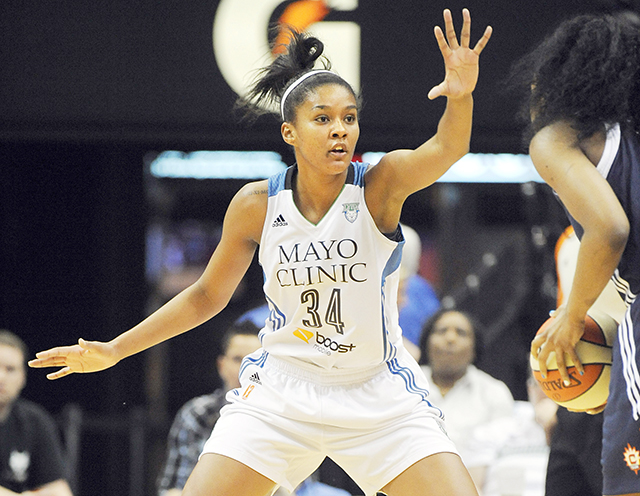 MinnPost photo by Craig Lassig
“[Dantas] understands basketball terminology,” Lynx assistant coach Jim Peterson said. “When you instruct her, she does exactly what you want her to do. That shows a level of intelligence that is off the charts.”

Dantas played for Brazil in the 2010 FIBA World Championships as 17-year-old. The following year she earned Most Valuable Player honors at the under-19 World Championships, averaging 20.9 points and 12.6 rebounds in nine games for the bronze medalists. Dantas wasn’t interested in coming to the U.S. right away, which was fine with the Lynx, who had no room for her anyway.

The Lynx are trying to get Dantas into English language classes here. So far, Peterson said language hasn’t been an issue. He and the players are picking up Portuguese words and phrases, too, like ribote, for rebound.

“She understands basketball terminology,” Peterson said. “When you instruct her, she does exactly what you want her to do. That shows a level of intelligence that is off the charts. Because there are players that we coach, they speak perfect English, and they don’t do exactly what you want.

“We call plays in English. For her to be able to nuance that in a foreign language is pretty amazing. And she mirrors a lot of behavior, too. A lot times, we’ll demonstrate and let somebody else do it first, and then she gets what’s happening. And she’s starting to speak in English, so she’s picking some English up. I’m really impressed with her basketball IQ and her ability to operate in a foreign language.”

Minnesota’s American players sympathize because they’ve been in Dantas’ position, as non-native speakers on winter pro teams in Europe and Asia.

“I understand what it’s like to be that person in that position of not knowing the language, everybody else is laughing and giggling, and you kind of just sit there,” McCarville said. “So for the most part, whenever we’re together, I’ll translate for her as much as possible.”

The next few days will test Dantas’ stamina, as the Lynx play three games in four days in three cities — Friday night in Tulsa, Saturday night at the Target Center against the New York Liberty, and Memorial Day afternoon in Chicago. Saturday, with Reeve matching wits and quips with her former Detroit Shock boss Bill Laimbeer, could be especially rugged since the Lynx fly back from Tulsa early that morning. (All WNBA teams fly commercial; it’s a league rule.)

Expect Reeve to find more minutes for rookie forwards Asia Taylor and Tricia Liston, as well as guards Tan White and Lindsey Moore, to keep Maya Moore, Seimone Augustus, Whalen and McCarville fresher. Whalen, who scored 10 of Minnesota’s 12 overtime points Sunday after a 1-for-10 shooting start, finished that game even more beaten up than usual.

“Especially on this team, with all the people who want to shoot the ball,” McCarville said. “I tell her three things: Run. Screen. Rebound. More people want to shoot, but you have to do these things. She said, `Okay, okay.’”