A Minneapolis bar on a Friday night doesn’t stock as much ice as Lindsay Whalen had strapped to her lower body last Tuesday night. “I’ve never been in one, so I’ll take your word for it,” Whalen said with a wink.

Both knees. Both ankles. One hamstring. The bags were so bulky and the bands so tight that Whalen barely bent her knees as she reclined on the stool in front of her locker. Whalen scrolled through her smartphone while waiting her turn for the ice tub in the Target Center trainer’s room.

“This is the pre-ice before the real ice,” Whalen said.

The Minnesota Lynx had just beaten the Los Angeles Sparks, 83-72, in one of most physically demanding games of the WNBA season. Late in the third quarter and again early in the fourth, Coach Cheryl Reeve pulled an exhausted Whalen out of game, alarmed at the sight of Whalen, hands on her knees, heaving to regain her breath. The second time, Whalen returned to contribute four rebounds, two assists and a layup in the final six minutes. It was James Brown’s old act, minus the cape.

With power forward Rebekkah Brunson (right knee surgery) not expected back until after the All-Star Break, and Seimone Augustus (left knee bursitis) out indefinitely, the healthy members of the Lynx Core Four — Whalen and Maya Moore — are taking it upon themselves to do more. For Moore, that’s scoring, rebounding and defense. For Whalen, that’s defense and general toughness.

Reeve asks her guards to grab 10 rebounds a night, collectively. Whalen almost did that herself, taking nine, along with five assists and 16 points.

“She’s just so mentally tough, and she wanted to win really, really badly,” Reeve said. “She wanted to be the one that led our team in toughness. She wanted to do that and be contagious in that way. I think she accomplished that.”

Two days after faltering late in an 87-80 loss in New York, the Lynx reminded a national television audience via ESPN2 that grit and defense at crunch time can overcome a lot. Not sure I’ve ever seen a team dominated on the glass as badly the Lynx were Tuesday — 42-33 overall and 20 to 1 offensively — yet still win going away, after trailing 59-56 going into the fourth quarter. 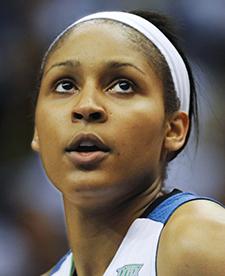 Moore, announced that night as the leading vote-getter for the All-Star Game, scored 16 of her 30 points in the final quarter, driving to the basket when her 3-point shot wasn’t falling.

“At certain times in certain seasons, I’m required to do different things,” said Moore, the league’s leading scorer at 23.2 points per game. “Right now we don’t have the depth we had at this point last year … . With Seimone and (Brunson) being out right now, I have to be aggressive, and take advantage of the minutes that I’m out there. Tonight was another one of those nights.”

Whalen filled in the rest.

“The point guard’s job is to lead,” Whalen said. “That was one of the areas I was most disappointed in (against the Liberty), not setting the tone on defense. That let us down in the fourth. Tonight I wanted to make sure I was solid on the ball, going for the loose balls and making plays.”

When she did, the Lynx followed along. “That’s the fire-starter that gets you going,” said center Janel McCarville, Whalen’s former teammate at the University of Minnesota. “When you see her in timeouts talking to people and saying what we need to do, then coming out and being the person to do it, putting her money where her mouth is, that definitely gives the team something to build off. We get right behind her. Not just Lindsay, but anybody who does it.”

Whalen even inspired McCarville’s nifty behind-the-back dribble and driving bank shot with 5:42 to play, channeling the ghost of Pete Maravich. McCarville said Whalen urged Reeve to call that play for her, a simple isolation that no one in the place anticipated.

“Whay said she wanted me to get that play,” said McCarville, using Whalen’s nickname. “I kind of assumed if I passed I was going to get in trouble. Any way possible, get to the basket. Not something you always see, but I’ve got some things in the repertoire.” 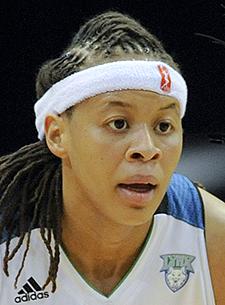 Reeve has little choice but to play Moore and Whalen all she can until Augustus and Brunson return. Her bench provides defense but precious little scoring, a league-worst 13.8 points per game that probably won’t improve much with Monica Wright starting for Augustus. Reeve needs all the offense she can get to offset a front line that can’t box out or rebound like she needs.

Tuesday marked the second time in the last three weeks the Lynx grabbed only one offensive rebound in a game, a franchise record low and the fewest in the league in six years. After leading the WNBA in rebounding margin the last three seasons, including a league record +6.8 in 2012, the Lynx entered Thursday night’s game at Tulsa with only seven more rebounds, total, than their opponents through 20 games. That’s where the Lynx really miss the rugged, relentless Brunson. In a 12-team league, they rank 10th in offensive rebounding.

The Lynx were better Thursday night, winning 91-85 while outrebounding the Shock 35-28, with seven offensive boards. Moore had 11 rebounds to go with 33 points, her franchise-record eighth 30-point game of the season. Whalen just missed a triple-double with 21 points, 10 assists and nine rebounds. The 15-6 Lynx will need more of that Sunday afternoon against Seattle at the Target Center.

“Rebounding is dirty work,” Reeve said. “It’s the separation between winning and losing. It’s just being mindful of that. You can play all the great defense you want. You can force them into the toughest shot you want. We don’t get a rebound, it’s all for naught. We don’t want to be that team.”

Too often, though, they are. So Moore entered play Thursday leading league in minutes played per game (35.0), while Whalen was 13th at 31.2. Augustus averaged 31.9, 11th-best, before missing the last five games.

Moore and Whalen are so tough, and tough-minded, that the Lynx can still prevail most nights against teams lacking that grit. Moore also joined the Whalen ice brigade on Tuesday, limping down a stairway to an autograph session with both ankles packed in ice, sloshing dripping water in her wake.

It will take more than those two for the Lynx to return to the WNBA finals, especially as well as Phoenix is playing. They need a healthy Augustus and Brunson; more physical play from Damiris Dantas and Dev Peters inside; and a little more of everything from McCarville.  For now it all runs through Whalen, so the Lynx need to keep the ice coming.