The Phoenix Mercury initiated its 16-game winning streak June 15 at the Target Center, a convincing 80-72 victory over a Minnesota Lynx team with Seimone Augustus slowed by left knee bursitis and Rebekkah Brunson in street clothes. The Lynx had beaten the Mercury 14 consecutive times going back to the 2011 playoffs, and this loss remains the only one by the Lynx at home this season.

Augustus couldn’t play at all three days later in Phoenix. That’s when Brittany Griner, the Mercury’s 6-foot-8 center from Baylor, posted her best game in two seasons as a pro, a 27-point, 18-rebound domination as Phoenix pulled away at the end to win, 92-79. Lynx Coach Cheryl Reeve guessed the Lynx might have lost by 40 if Maya Moore hadn’t scored 36 points herself.

No one has beaten the Mercury since. Phoenix’s streak is the second-longest in WNBA history, trailing only the 18 straight by Los Angeles in 2001. The 22-3 Mercury are unquestionable the WNBA’s best team, playing with an efficiency and confidence not seen since the 10-0 start by the Lynx, the defending league champion, in 2012.

So Thursday night’s Mercury-Lynx matchup at the Target Center, with the 20-6 Lynx finally at full strength, shapes up as the WNBA’s game of the year.

The implications run deep. The Lynx, 2 ½ games behind the Mercury in the Western Conference standings with eight to play, must overtake Phoenix to ensure home court advantage throughout the playoffs. If not, the Lynx, who are 11-1 at the Target Center, will only be guaranteed home court in the first round. Winning a best-of-three Western Conference final from the Mercury without home court won’t be easy; Phoenix is the only team in the WNBA whose home record (12-1) is better than Minnesota’s.

With Augustus finally healthy and Brunson back strong after missing most of the season with right knee surgery, the Lynx — winners of seven straight — appear much better equipped to deal with the Mercury this time.

“They’re the talk of the town, the talk of the league, with how great they’re playing. More power to them,” said Lynx center Janel McCarville. “But we’re not far behind them in that aspect. We have all the confidence in the world that we can play with them and beat them.” 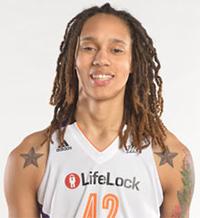 And Griner, pushed around as a rookie last season, matured into the force everyone expected from a No. 1 overall pick. She now leads the league (by far) in blocks at 3.88 per game while averaging 15.6 points and 8 rebounds. Griner has more blocks by herself than seven other teams.

“Health has a lot to do with it,” Reeve said. “The growth of Brittany Griner. The overall mood of Diana Taurasi. Sandy Brondello says (Taurasi) is playing the best basketball of her career. That says a lot, because she wasn’t bad before this year.”

Brondello shifting Taurasi back to point guard from shooting guard in June cost Taurasi some points on her scoring average —17.6 per game, sixth-best in the league and down from her career 20.3 mark. But Taurasi leads the league in assists at six per game while showing more self-control and leadership than last season, when she incurred a league-high nine technical fouls and twice drew one-game suspensions. Lynx fans certainly remember Game 1 of last year’s Western Conference finals, when Taurasi kissed Augustus on the cheek after the two bumped twice and had to be separated by an official. Both were called for personal fouls.

“People call her a bully on the floor,” said Augustus, who knows Taurasi from their AAU days as well as two gold medal-winning turns with the U.S. Olympic Team. “If you allow her to ram you, push you, talk trash to you, get in your head, then she’s going to have the edge. If you try to stay cool, stay within your system. … That’s always been great with us. We’ve always stayed within our team system. She was never able to get in Maya’s head or my head, whoever was guarding her, with her antics.” 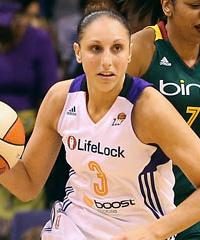 The other Mercury starters all average in double figures, and the team shot 50 percent or better from the field in each of its last seven games, a league record.

“Overall, their starters have just a great deal of comfort with one another and the things that they’re running,” Reeve said. “If you try to take something away, they’re very adept at trying to find something else, just like we are. Defensively, they’re different in what Griner is giving them, their behind-the-defense mindset. They know if they get beat, there’s B.G. to block a shot or change a shot.”

Because Phoenix can turn any off-target shot or turnover into a fast-break basket, the Lynx must limit offensive sloppiness.

Brunson’s return bolsters the defense and the rebounding while giving the Lynx a more physical defender to put on Griner than McCarville, who isn’t quick enough, or the rookie Damiris Dantas. Defense enabled the Lynx to sweep seven games from Phoenix last season, five in the regular season plus two in the best-of-three Western Conference final.

“It’s not a secret what’s been our main weapon,” Moore said. “We want to make it as hard as possible for teams to score. Make it tough on them. But it’s also sharing the ball on offense, taking care of it, getting good quality looks so that our offense doesn’t set up their offense in any way. I’m confident we can do that.”

This ought to be a beauty, especially with a sellout crowd expected. Too bad Fox Sports North, ESPN2 and NBA-TV chose not to televise it.