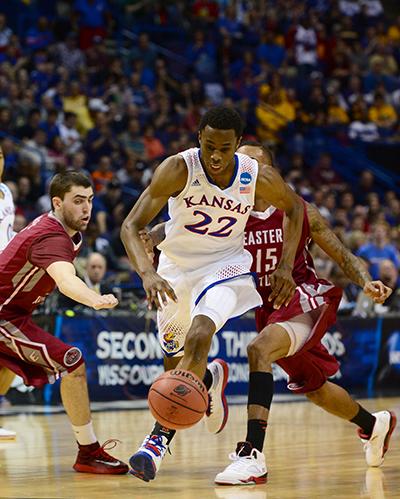 Jasen Vinlove — USA TODAY Sports
In exchange for Kevin Love, the Timberwolves are picking up
Andrew Wiggins, among others.

Kevin Love is being traded to the Cleveland Cavaliers. It won’t officially happen until August 23, when top overall draft pick Andrew Wiggins will have been signed to his rookie contract for 30 days and the Cavs then have the freedom to send him to Minnesota, part of a package that also involves last year’s top overall draft choice, Anthony Bennett, and a first-round pick in 2015.

Because of the rookie contract complication, the deal is not final, and either team can change its mind. But, barring injury or dysfunctional weirdness (always a threat when the Wolves are involved), the stakes are too high and too much has been leaked for either franchise to back out without taking a major public relations hit.

A backlash would ensue because both sides are getting, under the circumstances, what they need to move forward. For Cleveland, that is a chance to immediately win a championship with a new “Big 3” that includes returning hometown superstar Lebron James, dynamic young point guard Kyrie Irving, and Love, a matchup nightmare and the NBA’s best power forward.

For Minnesota, the trade is a chance to get more dimes on the dollar for a player of Love’s caliber than owner Glen Taylor and President of Basketball Operations Flip Saunders rightfully could have expected even a month ago.

All along, Saunders has maintained that he wouldn’t trade Love unless it improved the team, but anyone familiar with his situation knew he was bluffing, or, worse, delusional. Two years ago, Love wanted to sign a five-year contract in Minnesota. Taylor and then-POBO David Kahn balked, offering four years, and after some negotiation, stupidly gave Love an option to become an unrestricted free agent after three years.

After not making the playoffs his first six years in the NBA (while extending the Wolves’ postseason drought to a decade), Love understandably intended to exercise that option clause at the end of the coming 2014-15 season. The closer that deadline came, the less the Wolves could be expected to recoup in a swap and the more leverage over the situation Love retained.

By late March, when the Wolves’ playoff chances again went pffft, until early July, Saunders was hoping for a trade involving Golden State or Chicago that would have brought back some interesting pieces, but would not have improved the franchise either in the short-term or long-term.

Then, last month, Lebron decided to return to Cleveland, a franchise that just a few weeks earlier had selected the ballyhooed college forward Wiggins with that top overall pick. The Wolves, whose luck in the draft lottery has been legendarily awful (and compounded by front office incompetence), finally caught a break. Lebron, on the cusp of 30 with a lot of miles on his body, shrewdly informed Cavs management that he needed a ready-made star sidekick like Love in Cleveland. And in Wiggins, the Wolves can peddle the semi-legitimate hope that they can landed a burgeoning superstar—indeed, Wiggins has been hyped that way since he left high school for the University of Kansas a year ago.

Cheap talent. What a concept.

A catechism for team-building in the modern NBA — made even stronger by the recent collective bargaining agreement — is that it is absolutely essential to have quality young talent still under the cheap terms of their rookie contracts. The execrable lottery picks made by Kahn — Jonny Flynn, Wes Johnson, Derrick Williams — wreaked havoc on Minnesota’s ability to compete and thus directly led to Love’s departure. (It’s ironic that, having created the circumstances under which Love would want to flee, Kahn then provided a way for his star to accelerate the process.)

The Love situation allows Taylor a chance to get it right this time. If the trade goes through, the Wolves have the rights to the services of Wiggins through 2018, at an slightly rising cost from $5.5 million to $7.5 million per year—a bargain if Wiggins lives up to even half the hype. They also retain Bennett — a big disappointment his rookie season, to the point where he is probably underrated now — at roughly the same cost as Wiggins through 2017.

And don’t forget, the Wolves also have an extra first-rounder from Cleveland, and don’t have to sacrifice the first-rounder they may owe Phoenix if they finish among the bottom twelve teams this coming season.

In other words, the Wolves will pay Wiggins, LaVine, Dieng and Muhammad less combined money this season than they will pay just Kevin Martin ($6.8 million) and J.J. Barea ($4.5 million).

Another bonus of the looming Love trade is that it enables the Wolves to assess how this young talent gibes with holdover veterans before deciding whether they want to escalate their bid for a playoff spot in 2015-16 or partially dismantle in order to stockpile more assets.

The big contracts on the roster belong to Nikola Pekovic (four years left at $12 million per year) and Martin (three years left at approximately $7 million per year). The Wolves are also looking at Ricky Rubio becoming a restricted free agent after this coming season, but the nice thing about that situation is that other teams will set the market for Rubio’s services. If he dramatically improves his shot and otherwise elevates his game, he can expect a big offer from another team, which the Wolves then have a right to match.

If Dieng continues to improve and essentially replicates Pekovic, then Pekovic becomes more expendable. By contrast, if Pek and Dieng become a dynamic duo that either forms a fearsome frontcourt tandem or collectively holds down the center position in style, Minnesota can stand pat. If some combination of Wiggins, LaVine and Muhammad provides the sort of dynamic wing play that wins games as well as wows the crowd, decisions on floor-spacers such as Martin or Chase Budinger (owed $5 million per year the next two seasons) become more apparent.

It all sounds pretty wonderful, eh? Except that Kevin Love won’t be around, and the points and rebounds he was able to muster as well as anyone in the NBA will be sorely missed. Barring another trade, the roster will have a huge hole at power forward. According to Strib beat writer Jerry Zgoda, the Wolves are still trying to pry Philadelphia forward Thad Young away from the Sixers for guard Alexie Shved, forward Luc Richard Mbah a Moute and that first-round pick they will get from Cleveland. But Young is still undersized and if the deal doesn’t happen, the “best” options include trying to turn Dieng into a power forward (something that would dramatically increase his penchant for fouling) or using the offensively challenged Mbah a Moute in the frontcourt beside Pek.

Then there is the small matter of putting the ball in the hoop from three-point territory. The Wolves finished 26th among 30 teams in three-point accuracy last season, and that was with Love hoisting up nearly a third of the team’s attempts at an above-average 37.6 percent rate. Martin shot 38.7 percent, but his defense is so terrible that he gives that production back at the other end, while exhibiting a poor attitude and wretched shot selection.

Assuming they are both with the team at the start of the season, it is imperative that Martin and Budinger become consistent threats to score from outside, otherwise the Wolves should cut bait on both sooner rather than later. Mo Williams, a career 38.5 percent shooter from long range, was a nice acquisition. And Rubio, terrible shooting from everywhere else on the floor, was a near-average three-point marksman last season and hopefully is honing that part of his game.

Of course Martin, Budinger and Williams are not where the hope of this franchise lies, especially after the Love trade. Saunders is banking on a showtime extravaganza involving uber-athletes Wiggins and LaVine, choreographed by Rubio, and if Young comes over from Philly to further accelerate that transition offense, so much the better. Pek and Dieng will clean up in the paint.

Post-Love, the Wolves are banking on athletic youth. Under the circumstances it is a worthy gamble. For every flashy dunk, there is likely to be two or three cringe-worthy bricks — wayward outside shots — to be endured by the Target Center faithful (and if they are still in the building they are indeed among the faithful).

Last year’s team dreadfully underachieved with 40 wins, finishing nine games out of the playoffs. This year’s team is likely to amass a dozen fewer victories. But all that young, cheap talent will increase in value over the next two or three years.