When someone enters the men’s room with a video camera, my first instinct is to call the police. Except this was the men’s room at Midway Stadium, the soon-to-be-former home of the St. Paul Saints, where unexpected behavior has pretty much been the order of the day for 22 years.

Season ticket holder Terry Kayser, a retired senior planner for the Metropolitan Council, arrived at Midway late Wednesday afternoon intent on committing to video as many details of the stadium as he could. That included the old photos hanging in the men’s room, where I ran into him. A friend shot one photo, a vintage black-and-white of Tiger Stadium in Detroit.

“I was just out in the parking lot,” said Kayser, in white Saints cap and a tuxedo T-shirt with a Saints logo on the pocket. “It’s sort of a goodbye to Midway Stadium.”

It’s a goodbye that’s been long overdue. The Saints play one last time at Midway, Thursday night against Winnipeg, before moving into their new $63 million ballpark in Lowertown St. Paul next May.

Anyone who has been to Midway in the last five years knows the park, which opened in 1982, has seen better days. Stadium manager Bob Klepperich, 74, worked at all three major St. Paul ballparks of the 20th century – Lexington Park, the original Midway Stadium, and the present Midway – and sees “strong parallels” in the final days of all three.

Mainly, all were decrepit.

“This one is really showing its age,” Klepperich said after stepping off the red Toro tractor used to drag the infield dirt. “We’re doing everything we can to keep it going. The mechanical parts are 30 years old. You don’t know when something is going to fail.”

The lush field, even with its weird undulations, gleams compared to the dull aluminum benches and worn concrete steps of the main grandstand. The small, smelly restrooms are augmented by port-o-lets, which most women refuse to use. A poorly-timed trip to the restroom or the concession stand often means missing a full inning, sometimes two. Anyone with mobility problems who can’t make it up the ramps is pretty much out of luck. Underneath, the clubhouse and manager’s office rank among the smallest and dingiest in independent ball. Weeds grow through the cracks in the parking lot. 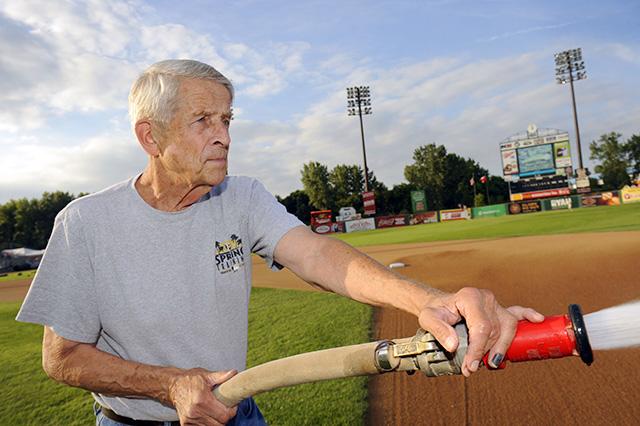 Saints officials blame declining crowds on the stadium’s warts, along with the 2010 opening of Target Field, which eliminated outdoor baseball as a Saints exclusive. The last two years, average attendance fell below 5,000 a game for the first time since the inaugural 1993 season. It rebounded this year to 5,173 going into Wednesday night. That’s still a dropoff of more than 1,000 since 2008, when 6,235 per game passed through the main gate and the Andy Nelson stadium mural just inside.

The recent lack of marquee players or championship teams (the last title came in 2004) contributed, too. This season a late 3-15 swoon cost the Saints an American Association playoff berth.

“I’ve managed 16 years, and this is one of the worst stretches I’ve seen happen to a team,” Saints manager George Tsamis said before his team thumped Winnipeg, 14-7, on Wednesday night. “It was a good year until the last three weeks.”

Thursday night’s Midway finale is a sellout, though standing room is available. The Saints plan to bring back original manager Marty Scott, pitcher Ila Borders, and various special guests to give Midway a proper sendoff.  (Darryl Strawberry and Kevin Millar, two of the Saints best-known former stars, can’t make it.)

For longtime fans and Saints employees, it could be a tough day. Klepperich, who is not making the move to Lowertown, chose to work his final game Wednesday to avoid the hoopla. Saints infielders Keith Brachold and Devin Thaut sought him out for pregame hugs. “We’ll miss you,” Thaut said. “This field is never going to look any better.”

Club vice president Annie Huidekoper, the third person hired by co-owner Mike Veeck late in 1992, at first shared an office with Veeck that today is barely big enough for her desk, a file cabinet, and an old barber chair she offers to guests. The original color of the carpeting has been lost to history. You don’t want to know the condition of the ceiling.

Huidekoper’s favorite memories involve the earliest days of the franchise. After the first game in 1993, co-owner Bill Murray walked into her office carrying two shopping bags from the Electric Fetus, the famed Minneapolis music store and head shop. Huidekoper wasn’t sure what to think until Murray told her, “Annie, we’re going to make the place smell better.” Out came sticks of incense, and off they went to the restrooms.

“We bonded from there,” she said, smiling. A framed New York Times Magazine cover of Murray hangs by her desk.

“There were a lot of great moments here, but that first year was really special,” she said, pointing to a photo of the original 17-person staff on a back wall. The Saints, featuring former Chicago Cubs first baseman Leon Durham and future major-leaguers Rey Ordonez and Millar, won the Northern League title that season.

“After we won the championship, I sat in the stands and just cried,” Huidekoper said. “I said, `I don’t know if I’ll ever have a better year than this.’ ” 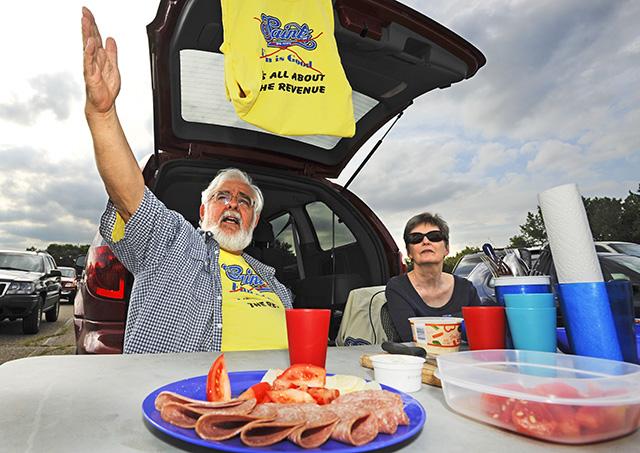 MinnPost photo by Craig Lassig
Peter Boehm and Nancy Peterson of Falcon Heights have been tailgating since the Saints started playing at Midway Stadium.

Smart money predicted swift failure for the Saints. But Veeck’s gimmicks – pigs bringing out baseballs, nuns giving massages, and all manner of outrageous gags between innings – caught on. The Saints averaged 4,539 in the 6,069-capacity ballpark the first year, then topped 6,000 in every season but one between 1994 and 2008.

Freight trains chugging behind left field became part of the act. Players and club officials mingled with fans postgame, tailgating in the Midway parking lot or at hanging nearby at Gabe’s By The Park. The whole thing was social and cool.

Peter Boehm and his wife Nancy Peterson bought two season tickets in 1993. “That first year, I said to him, `Great, we’ll spend the whole summer trying to give away tickets,’” she said. Didn’t happen. The next season they bought two more. They still have them. Wednesday they tailgated in their usual spot, about 100 feet from the main gate.

“This has been a wonderful experience these last 22 years,” Boehm said. “And something wonderful is dying in this transition.”

Boehm fears the Saints will lose their blue-collar, family-friendly feel in a ballpark with luxury suites and corporate club seats. He may be right. Friends of mine in Omaha insist the College World Series lost its charm and appeal in the move from quirky old Rosenblatt Stadium to TD Ameritrade Park in 2011.

Hoping for the best, Boehm renewed his season tickets behind the plate, at a steep increase for 2015. His method of protest: A T-shirt hanging from his red van with the Saints name and slogan, “Fun Is Good,” crossed out over the words, “It’s all about the revenue.”

“If they can’t secure a 500-space parking lot dedicated to tailgating right outside the ballpark, it changes the whole experience,” Boehm said while arranging slices of Genoa salami and provolone with tomato wedges on a paper plate. “You can’t have Boy Scouts coming out and roasting hot dogs. People are going to go to restaurants downtown, and you’ll price a whole lot of folks out of the market.”

Saints officials are searching for a suitable tailgate lot near the ballpark. For now, the Saints and their fans get one more night in the old joint on Energy Park Drive where they created wonderful memories, together.

“I like to compare it to your grandparents house,” Huidekoper said. “People are sad when their grandparents finally sell the house and move into a condo or assisted living or something. But you still have the memories. It’s time to take the best of the Saints, and improve on the rest.” 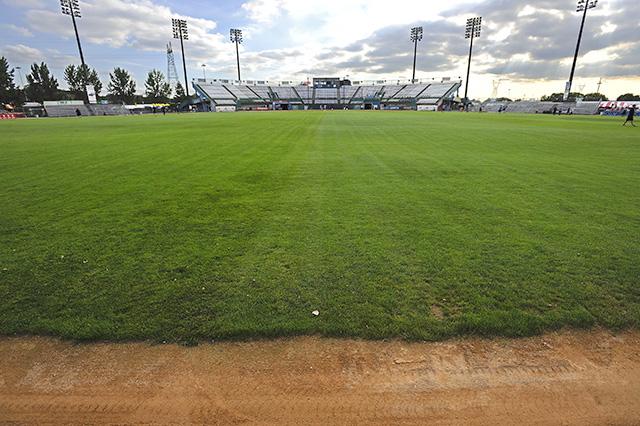