Last month, as part of his 2015 budget, St. Paul Mayor Chris Coleman announced he wanted to spend city money to build a court for tuj lub. To which many a resident replied: “Huh?”

I was assigned to find out more about tuj lub, with my first insight being: It’s a sport. And that it’s not pronounced tudge-lub, it’s “too-loo”  (and sometimes among the Hmong: tuaj lub, or too-a loo).

So what the heck is tuj lub?
It’s a game played outdoors with elements of baseball, golf and maybe a little souped-up bocce ball, and also incorporates an elaborate spinning-of-a-top-with-a-stick-and-line element that requires strength and focus. It’s a traditional Hmong sport that was played for generations in Laos and then in Thailand refugee camps, which Hmong immigrants brought with them when they resettled in the United States.

How is it played?
Chia Chue Yang, head of an association of six tuj lub teams in the Twin Cities area, helped explain. He said there about 100 players in the area and about 30 of them were playing Tuesday at Keller Regional Park, just west of Hwy. 61 in Maplewood. The “vibe” of the gathering was somewhat akin to a slow-pitch softball game; low-key but occasional bursts of emotion when a top was well-played, or not-so-well played. Generally, one referee makes the judgment calls, while another keeps score on a sheet similar to a baseball score book.

Because there is no actual tuj lub court/field in the area, the games were played on a grassy stretch of the park. A large piece of carpet was brought along to serve as the shooting spot, and two smaller pieces of material are laid out for the spinning tops in the first two stages.

Two teams of six players compete. The elongated court, or field, has to be longer than 70 feet, and not quite as wide. The team that is “up,” starts on a launching space (the carpet) that is about the size of a batter’s box. Each spinner must stay within the space when flinging his top.

MinnPost video by Joe Kimball
Each spinner must stay within the space when flinging his top.

Each player has a tuj lub stick — about two-feet long — which at one time was made of bamboo, but now is a cut-off golf club.

A nylon or fishing line attached to the stick is wound around a hard plastic top (back in Laos, the tops were made of hardwood) that’s between 4 and 5.25 inches high.

There are two basic moves with the stick and top: 1. a waist-high powerful flick of the stick to quickly unwind the string and spin the top at speeds up to 50 or 70 miles per hour. 2. An over-the-shoulder fling to try to knock down tops set up in the distance.

There are eight stages, similar to innings. 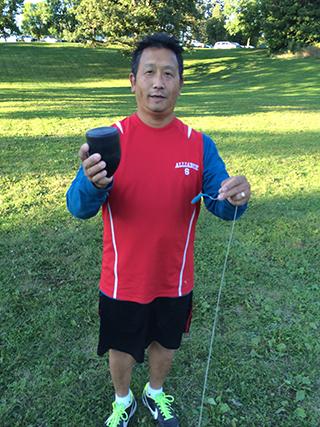 In stage one, a member of the opposing team spins his top on a surface ten feet in front of the spinning box. One of the spinning teams then flings his top from the launch box, trying to knock the spinning target hard and far. When successful, both stops will fly apart, and the top that continues spinning the longest earns a point.

When all six have taken a shot in the first stage, the other team is “up,” and follows the same sequence.

In stage two, the opponent spins a top further away from the launch box, at 25 feet, and each team member takes a turn trying to earn a point by successfully knocking it off.

The remaining six stages involve hitting stationary, not spinning, tops set at ever-increasing distances for each stage. Stage 3, there are six tops lined up 32.5 feet from the box. In stage 4, five tops are 7.5 feet further away, on up to the final stage, where one top is 70 feet away.

MinnPost video by Joe Kimball
In stage two, the opponent spins a top further away from the launch box, at 25 feet, and each team member takes a turn trying to earn a point by successfully knocking it off.

In these last six stages, the spinner flings his spinning top in an over-hand movement, hoping to knock away the opponent tops.

There are bonus points in each round and after both teams finish the eight stages, a second game is played. The team with the most points combined in the two games wins. A two-game set takes about an hour. 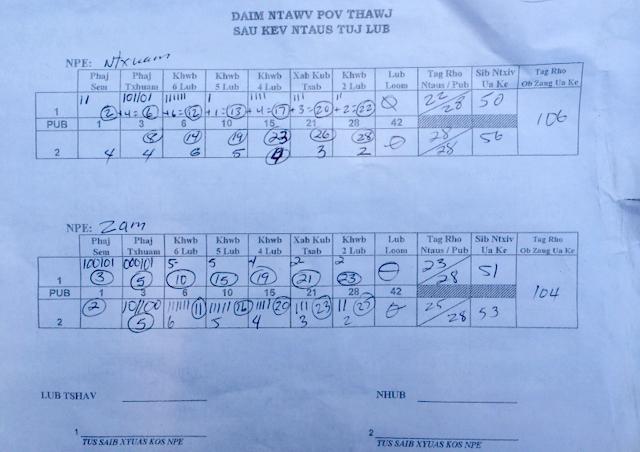 Is it popular elsewhere in the U.S.?
It’s played in all parts of the country where Hmong have settled, and local teams often travel to far-away tournaments. Each July 4, teams from around the country compete here at the major Hmong festival held in St. Paul’s Como Park, which is considered to be a sort of Super Bowl of tuj lub. This YouTube video shows action from this year’s tournament.

If St. Paul builds a court, where would it go?
No decision has been made on when or where a St. Paul tuj lub court would be built. The local players hope it’s somewhere central, with good parking.

Does it ever get rowdy?
Not really. Players generally get along during games and rarely challenge the ref’s judgment calls, Yang said. If there are fights, both sides forfeit. “Players maintain their manners,” he said.

St. Paul is looking to build a tuj lub court. So what exactly is tuj lub?