Macalester College wasn’t Konnor Fleming’s first choice when it came to playing college football. Or his second. Or even his third.

Fleming grew up in Charlotte, Vermont, a small town on the shore of Lake Champlain near the Canadian border. He planned to play Division III ball in New England, maybe in-state at Middlebury College, or at Trinity or Wesleyan in Connecticut.

Between 1973-79, the Scots dropped 50 consecutive games, an NCAA all-divisions record until Prairie View lost 80 straight from 1989-98. At one point, ESPN rated Mac as the second-worst college football team of all time. In some corners of the country, people still equate Macalester – a private liberal arts school in St. Paul renown for its academics – with football futility.

The 50-game streak was the worst of it, but not by much. Except for a four-year stretch in the 1980s, the Scots were consistently awful through 2001, when school officials considered dropping the program before choosing to leave the Minnesota Intercollegiate Athletic Conference for an independent schedule. Naturally, Fleming’s buddies needled him relentlessly.

Actually, it was. Fleming, now a senior defensive back, has been part of a football revival at Macalester, a nine-year climb that brought the Scots within sight of something that would have once seemed like a fantasy: an NCAA playoff bid.

The biggest game in school history

This season, its first in the Midwest Conference after 12 as an independent, Macalester (8-1) broke the school record for victories, set in 1960 (7-2) and tied in 1986 (7-2-1), while winning the North Division title. Its current seven-game winning streak is the longest since 1947-48. Last week, for the first time since the American Football Coaches Association national poll was established in 1999, the Scots received votes (only two, but still).

And if Macalester beats Illinois College on Saturday in Jacksonville, Ill., it will win its first conference title since sharing a MIAC crown with St. Thomas — in 1947. That was so long ago it predates legendary St. John’s coach John Gagliardi, who arrived in Collegeville in 1953.

Lee Nystrom, a Macalester trustee and the team’s defensive line coach, starred for the Scots in the early 1970s before playing three seasons for the Green Bay Packers.  Jennison said he asked Nystrom this week whether Saturday’s game was the biggest in program history. “He said, `Without a doubt,’ “ Jennison said. “So that’s what I’m going with.”

In fact, the game is so big that Macalester’s administration sprung for a charter flight to spare the team a nine-hour bus trip. Athletic director Kim Chandler surprised the players with that news before practice Monday, crediting college president Brian Rosenberg and student affairs vice president Laurie Hamre for making it happen.

“That was something else,” Fleming said. “I’m going around to my friends and professors, telling them this is the closest I’ll feel to being a Division I football player in my life.”

An overnight success — a decade in the making

It took a while for Macalester football to get this far. When the Scots finally broke the losing streak, beating Mt. Senario (Wisc.) 17-14 in the 1980 season opener, Mac president John B. Davis Jr. told People Magazine, “We are really an academic college, and the attention to Macalester football got a little out of hand.”

That effectively summarized Macalester’s arms-length relationship with intercollegiate athletics for decades. Division III is the NCAA’s bouillabaisse, an untenable mix of institutions with widely varying enrollments, characters and missions. Some emphasize athletics. Some don’t. Jennison noted that discrepancy just within the MIAC, where Macalester and Carleton College, with similar academic profiles, won only four football titles between them from 1920 to 2001.

Ultimately, Macalester decided it no longer belonged in a conference that included some of the best Division III football programs in the country, where its players were too often overmatched. In announcing Macalester’s decision to leave the MIAC in football (it remains in other sports) in 2001, college president Michael McPherson wrote: “Many of us Division III presidents have been concerned about a kind of drift among Division III colleges toward what might be called ‘Division I’ values — more specialization of athletes, longer seasons, more off-season practice, greater emphasis on postseason competition, and favorable admissions and financial aid practices for athletes.”

Thirteen years later, nothing has changed.

Macalester still leans eclectic. Nearly one-fifth of its 2,000 students come from outside the U.S. Former United Nations Secretary-General Kofi Annan is an alumnus (so is Walter Mondale), and a U.N. flag flies beneath the Stars and Stripes on the Great Lawn in front of the Dayton Campus Center. When Rosenberg succeeded McPherson in 2003, athletics ranked far down the list of priorities.

Rosenberg, a Charles Dickens scholar, reasoned that athletics should strive for the same level of excellence as every other discipline. The school began fund-raising for the $45 million Leonard Center, a state-of-the-art wellness and athletics facility for all students that opened in 2008. The athletic department redirected more of its budget toward recruiting. 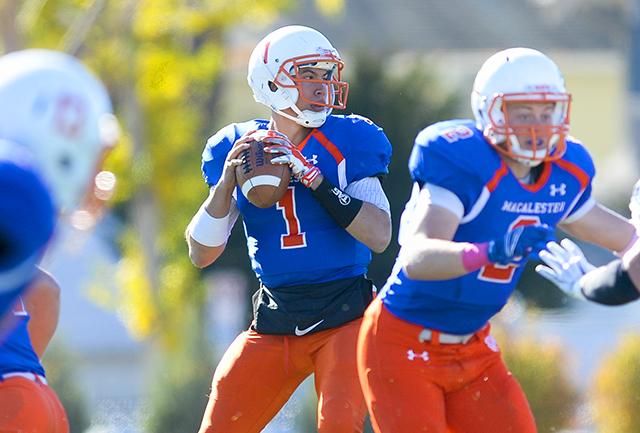 In 2006, Mac had 24 players and a 14-game losing streak when it hired Glenn Caruso, a University of South Dakota assistant coach. Caruso doubled the roster size and went 6-12 in two years — a marked improvement from 2-25 the previous three seasons — before moving a mile down the road to take over the football program at University of St. Thomas.

Jennison, Caruso’s defensive coordinator, took over. Two more losing seasons preceded a 6-3 finish in 2010, Macalester’s first winning record since 1986. But since the beginning of 2010, Jennison’s teams have gone 28-19, representing the longest sustained success by the Scots in 50 years.

The last few years saw Macalester struggle to find opponents late in the season, so it sought a conference affiliation. Rather than return to the MIAC and be outmatched again, the Scots chose the Midwest Conference, a better fit for roster size and philosophy. That gave the players a tangible goal to shoot for this season. Fourth-quarter victories over Carleton (non-conference) and Grinnell (conference) built their confidence.

“Those were defining moments,” said senior quarterback Samson Bialostok, a half-Taiwanese pass-run threat from Long Island with one of the coolest names in college football. “In my four years here, we were notorious for folding in those situations,” Bialostok said. “Even when we were playing well, if the other team got ahead of us, we packed it in. Now we know, no matter what the score is we have a chance of winning.”

In last week’s division-clinching 21-13 victory at St. Norbert, Bialostok ran for two touchdowns and threw for another, while Fleming made nine tackles and added a key interception in the end zone with 45 seconds left.

Finding a niche at a football-indifferent school

It would be a stretch to say that Macalester has gone football-crazy, but people are noticing. Bialostok said professors and students approached him the last few weeks to congratulate him. “That’s never happened in my time here,” he said.

Fleming might be the most multi-faceted Scot. Besides football, he throws the javelin, serves as a resident advisor in a dorm, and sings in a campus a capella group called —  no joke — Scotch Tape. He insists his younger brother Ryan, a Scots junior linebacker, is better than he is. Ryan leads the team with 80 tackles; Konnor is third with 51.

Yet within the multi-national world of Macalester, football may be finally carving a niche. This year, Fleming noticed more people from his dorm coming to games. That’s a start. In the skyway between the DeWitt Wallace Library and Old Main this week, a solitary handwritten banner, signed by the Mac softball team, supported the Scots in championship game. “We Believe,” it read.

“We’re not the biggest thing sweeping the campus,” Fleming said. “But it’s cool.”