There were so many positive signs emanating from the Minnesota Timberwolves road win over the Brooklyn Nets on Wednesday night that fans will want to store it as a keepsake — a snow globe that, when shaken, becomes a blizzard of basketball sugarplums dancing in the head of team architect Flip Saunders. Recounting the game amounts to a congratulatory roll call. So let’s get started.

There was star-in-waiting rookie Andrew Wiggins, typically patient to a fault, who had missed all nine of his field goal attempts in the first halves of his first three NBA games, racking up seven first-quarter points with a well-chosen mixture of jump shots and power-glide drives to the hoop, including one where he lingered in the air for awhile — waiting for Brooklyn’s seven-foot center Brook Lopez to descend back to the court — before banking the layup. Wiggins finished with 17 points, more than doubling his previous career high.

The rookie bookended that early offensive eruption with some crunchtime defense as the Wolves surged from behind in the fourth quarter to secure the win. In Minnesota’s previous game, Wiggins was suckered into the air with a shot-fake by Chicago’s Jimmy Butler with less than a second remaining in the game and the Wolves up by one. Butler leveraged Wiggins’ levitation into a pair of game deciding free throws arising from the inevitable foul. On Wednesday, Wiggins was pitted against Brooklyn’s go-to scorer, Joe Johnson, who outweighs the teenager by 40 pounds and is renowned for his ability to vanquish individual defenders on isolation plays. In the final 4:17 of the game, Wiggins limited Johnson to just two baskets in six shot attempts (one of them a tip-in of his own miss), without a single foul as Minnesota outscored Brooklyn 16-5, transforming a four-point deficit into a 98-91 triumph.

Along with Wiggins, the long-term health of the Timberwolves franchise lies in the often-magical hands of point guard and team leader Ricky Rubio, whose first three NBA seasons revealed him capable of passing like a Harlem Globetrotter while shooting like a guy just called up from the Fort Wayne Mad Ants. This gross disparity in his skill set has prompted pundits to marvel at and mock Rubio in unfairly equal doses. Despite ranking second among all NBA players in assists last season and topping everyone in steals, he frequently was benched in the fourth quarter by Wolves coach Rick Adelman, as critics noted his historically inept shooting accuracy and opponents chose to shut off his passing lanes and invite his open jumpers.

Rubio has been diligently working with a “shot doctor,” Mike Penberthy, who correctly noted that the sabotage in his clanking missives was rooted more in psychology than physics. The Timberwolves’ faith in Rubio surmounting those demons was trumpeted with the flourish of a four-year, $55 million contract signed last week. Rubio responded with an extra dose of the status quo, doling out 17 assists—tied for the most ever in the Wolves’ 26-year history—while making just three of ten shots and missing his only field goal attempt in the fourth quarter, in which he logged just 4:18 of playing time before fouling out.

Although there were flashes of assertiveness and accuracy in his first three games, Rubio arrived in Brooklyn shooting just 37.5 percent. That woeful figure declined further in the fourth quarter, to 16.7 percent (1-for-6), one reason why backup point guard Mo Williams had logged more minutes than Rubio in the final stanza.

For a prolonged stretch to open the fourth quarter on Wednesday, Wolves fans were subjected to a terrible sense of déjà vu. Saunders, emulating Adelman from a year ago, kept Rubio on the pine while Williams—mimicking J.J. Barea last season—showcased the gulf between his ego and his ability, ushering a twelve-point run by the Nets that had Brooklyn up 82-76 when Rubio finally re-entered the fray almost exactly halfway through the period at 6:02. 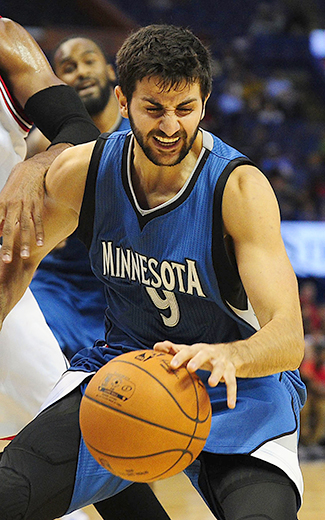 In terms of crunchtime effectiveness and efficiency, it was the best six minutes of his career; an experience Wolves fans fervently hope to regard, in context, as a watershed moment. It began inauspiciously with a pair of important but pedestrian assists—a low-post feed to center Nikola Pekovic and a dish to Kevin Martin flashing across the top of the key for a midrange jumper.

Then Rubio again delivered a bounce pass to Pek down low, compelling the Nets to double-team the big man. Rubio dashed to the open space beneath the rim, Pek wheeled and found him, and Rubio laid it in. This was not pedestrian: The most glaring inadequacy Rubio possesses as a shooter is converting shots right at the hoop. This had not changed during Minnesota’s first three games—Rubio was a ridiculous 4-for-13 on shots “at the rim,” according to Basketball Reference. But his conversion on the give-and-go play with Pek sliced the deficit to two with 3:46 to play.

On the next possession down the floor, Rubio took a pass from Kevin Martin and, without hesitation, canned a jumper while moving to his left just inside the three-point arc. The possession after that, he found Martin in the corner with a wonderful skip pass that K-Mart transformed into three-point splash.

Brooklyn was still up a deuce, 91-89, with 80 seconds left to play. Saunders called for a set that would have Martin come off screens on the lower right post for a jumper. But Brooklyn had recently subbed in rugged Alan Anderson to check K-Mart, and the play devolved into a seven-player scrum, with K-Mart caught up in the wash. Isolated with Brooklyn’s Deron Williams out on the left wing, Rubio suddenly erupted with a crossover dribble to his left, barreled toward the hoop and banked in a layup as Williams and Lopez tumbled to the floor after colliding with each other trying to block the shot.

If you’re scoring at home, that’s three Rubio buckets in a 2:29 span of the final four minutes of nip-and-tuck road win. In that final 6:02 of action, Rubio was 3-for-3 shooting, doled out four assists, grabbed a rebound and was plus 13. For the game, he scored 14 points on 6-for-11 shooting, rang up a dozen assists and narrowly missed a triple-double with 8 rebounds. The Wolves outscored the Nets by 26 points in the 34:29 he was on the court.

The veterans: block of granite and quirky gunner editions

If Rubio can build on this fourth-quarter performance, there is potential for profound synergy between the point guard and Minnesota’s 295-pound behemoth, Nikola Pekovic. For that matter, it is no coincidence that Rubio had room to find his shooting groove on a night when Pek was alternately steamrolling and walling off poor Brook Lopez as the Wolves’ situation warranted.

The statistics camouflage the extent of the mismatch. For example, Pek shot 5-for-12, Lopez 5-for-14. You get a hint of the carnage when you see Pek had seven foul shots to just one for Lopez, or that Pek outrebounded his Brooklyn counterpart 11 to 5. Then you flip to the plus/minus totals. In a game decided by seven points, the Wolves were plus 34 in the 32:03 Pek was on the court (and thus minus 27 in the 15:57 he sat on the bench), while the Nets were minus 27 in the 33:53 in which Lopez fruitlessly toiled.

In fairness to Lopez, this was just his second game back after missing nearly eleven months with injuries, while Pek had already emerged from his own embarrassingly rusty wake-up call in the season opener against Marc Gasol and the Memphis Grizzlies. In any case, Pek established positional dominance over Lopez at both ends of the court (“the guy whipped him,” Brooklyn coach Lionel Hollins remarked after the game), forcing the Nets to double-team him, which opened up space and lanes for Rubio. By contrast, when Rubio is making and taking shots like a respectable NBA scorer, Pek is going to have fewer defenders to joust with down low. Now that both Pek and Rubio are under contract for the next three and four seasons after this one, this potential synergy qualifies as exceptionally good news.

Barring a trade that would loosen the logjam of wing players on the Wolves roster, another veteran, Kevin Martin, will be around for two years after this one. That fact would usually loom as a lodestone on mood of Wolves fans who appreciate a little defensive intensity from their ball club. But Martin—justifiably regarded as one of the worst defenders in the NBA—has exhibited a pulse at that end of the court thus far this season.

At Media Day, Martin announced that he had gotten away with a subpar effort a year ago, a statement that damned both him and his coach and mentor, Rick Adelman. After sitting out the opener with an injury, he has returned to the lineup with a vengeance on offense, leading the Wolves with 23.7 points per game average. More importantly, after deemphasizing the three-point shot during the second half of last season, he is back up to hoisting nearly six treys per game, and making 52.9 percent of them. Thus far in the nascent season, Martin is 9-for-17 from distance; the rest of the Wolves are 12-for-34, or 28.3 percent.

But K-Mart earns his place on the roll call as much for hustling on defense Wednesday night as for converting 4-for-9 from three-point range. It was especially heartening to see him back with Rubio in transition, trying to stop a Brooklyn fast-break off a steal. One cautionary note: Martin shot lights-out and put up a reasonable facsimile of defense last November as well. The jury is still out on his staying power.

On the same night that Wiggins was assembling a career-best performance, Thad Young was doing his under-the-radar, yeoman contributions at both ends of the court and Anthony Bennett again teased with a thunderous dunk over taller players in traffic, the Cleveland Cavaliers were losing their third game in four attempts, to the lowly Utah Jazz, no less.

Kevin Love — the star player traded to the Cavs in a deal that netted the Wolves Wiggins, Young and Bennett — is shooting just 36.4 percent and posting the worst rebounding per-minute totals of his career thus far. For the segment of fans alienated by Love’s desire to force his way off the Timberwolves, there is undoubtedly some satisfaction in Love’s plight. Odds are it will be brief.

The two-year performance of Flip Saunders as Wolves’ President of Basketball Operations may be a more durable pleasure, however. None of the three players acquired by Saunders in the Love trade shows signs of being a bust; meaning that, under the circumstances, he has acquitted himself well thus far. Perhaps even more significantly, Saunders’ dogged pursuit of Golden State’s shooting guard Klay Thompson, which was derided by many pundits — including me — seems to have been prescient, given Thompson’s emergence as a crucial cog on the undefeated Warriors this season.

After a game in which Wiggins exploits his athleticism on offense and decently defends as a wing stopper against a premiere scorer; Rubio punishes an opponent with his shooting as well as his passing; the normally slow-starting Big Pek flashes prime-time brutish, balletic beauty; and Kevin Martin gives a whit about defense, it is oh so tempting to make grand claims for this Wolves ball club.

I’m just going to revel in the moment, stow the keepsake, and see what happens over the weekend in Orlando and Miami. On Monday, Minnesota will be six games in; time enough for a little trend-spotting. Until then, the threadbare cliché, “one game at a time,” is cause to smile and await the next development from this increasingly intriguing collection of talent.