The Kato Ballroom, a banquet hall where the Twins Winter Caravan stopped Tuesday night, lies in a sketchy commercial neighborhood in Mankato north of downtown. Nine months ago, one person was killed and three injured after a late-night shooting in the parking lot.

I thought it best to park on the street.

The Caravan is a Twins winter tradition, begun in 1961 after the club’s move from Washington. Four groups of players, announcers and team officials crisscross Minnesota, the Dakotas and Iowa in the weeks leading up the Diamond Awards dinner and TwinsFest, which is being held this weekend at Target Field. At least nine other teams do similar tours. This year’s Caravan hit fewer communities than usual, about 40 instead of 50-plus, while still making three or four stops per day.

Even after a fourth consecutive 90-loss season, people generally seemed in a good mood. These are the diehards, the ones who can find hope in a haystack, even if no one else can find it with a microscope. They gave Morris, the Game 7 hero from 1991, a standing ovation — “I want to come out and hug you all,” Morris said — and applauded the fresh-faced Dozier like he just won an Academy Award.

“I swear to God, in our darkest years — and we had some bad years, specifically back in the mid-1990s — you would never know it when you went on Caravan. If you ever rode on one of these caravans with (Kirby) Puckett, you would be shocked by the turnouts.”

Tom Owens plays washboard and sings for the Blue Ox Jazz Babies, the quintet that entertained in Mankato. They’ve done this gig for about a decade, and Owens has the autographs on his washboard to prove it, from Harmon Killebrew to Juan Berenguer to Wally the Beer Man. “I’m the eternal optimist,” he said. “I think they’re going to be great.”

God love these people and their loyalty. In a lot of places, a four-year swoon would have created a lot more empty seats. Instead, 700 people showed up Monday at Augustana College in Sioux Falls. On Jan. 12, the first night of Caravan, more than 400 people attended the 75th Hot Stove Banquet in Oakdale, the annual gathering of St. Paul’s amateur baseball elite. Joe Mauer made a surprise appearance, joining new manager and fellow Cretin-Derham Hall alumnus Paul Molitor, Glen Perkins, Ryan and others on the dais. Banquet chairman Brad Drake said he moved up the dinner date — the same night as the FBS football championship, a scary notion — to accommodate Molitor and Perkins.

“We’ve had this talk on the bus and stuff,” Dozier said. “A team that has not done very good at all the last four years, to come out on the caravan and see the same support I saw five years ago right after we did make the playoffs, that was pretty cool for us.” 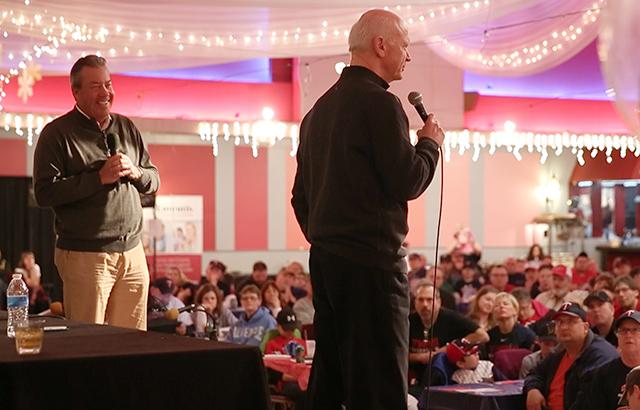 That’s not to say a significant segment of so-called Twins Territory isn’t crabby about the losing, or the team’s response to correct it. The Mankato appearance came two days after Max Scherzer, one of baseball’s most coveted free agent pitchers, agreed to a seven-year, $210 million contract with Washington, the kind of fan-energizing bold stroke the Twins abhor.

Instead, as usual, the Twins chased second and third-tier targets. Thirty-nine-year-old Torii Hunter, his skills diminished but his smile and competitiveness intact, might only be here a few months before being dealt to a contender. (Hunter raised that possibility to a few of us after his introductory press conference. His no-trade clause simply means he can veto a deal to a lousy team.)

Ervin Santana provides a second reliable starter to go with 16-game winner Phil Hughes. But the rest of the rotation is crowded with underperformers, kids and question marks. The starting pitching shouldn’t be as dreadful as last year’s — famous last words, we know — but it doesn’t inspire anyone to camp out for tickets or clear their October calendars.

At the Hot Stove Dinner, Ryan said, “We have a chance to be pretty good if we stay out of our own way,” which isn’t all that helpful either.

Season ticket renewals are expected to drop again. Ryan told the Mankato crowd that hitting prospects Miguel Sano and Byron Buxton might be with the Twins by the end of the season, but that’s a long way off. The organization’s last shred of credibility rests with Ryan, and he hears the same ticking clock as the rest of us.

“We’ve had four tough years, and I think people are tired of hearing about hope,” Ryan said. “They want to see results, and that’s apparent too. I get a little more of that from the players and the staff, just because they know the buck stops at my chair. I’m starting to hear that a little bit more than I have, which is justifiable. It’s time. We’d better get going.

“We talked about prospects maybe a little too much. That’s one of the issues. We disappointed our fan base quite a few times recently. Some of the guys we went and got have not performed. So with that comes the conclusion that we’re tired of hearing about the talk. Let’s do something on the diamond.”

Caravan is where the Twins really miss fired manager Ron Gardenhire, who turned every stop into a sort of “Gardy Night at the Improv.”

Seven years ago, at a VFW hall in Montevideo, I watched a wisecracking Gardenhire defuse a crowd uneasy over the Twins letting Hunter leave as a free agent and entertaining offers for two-time Cy Young Award winner Johan Santana. Joe Vavra, then the batting coach, kept looking up at Gardenhire, shaking his head and laughing. Gardenhire left the stage like he had just conquered Gaul, and half the place wanted to buy him a beer.

“Gardy was very good at lot of things, but this is where he really shined,” Ryan said. “People loved Gardy and he really could do these things. It’s different, certainly. We were blessed to have him for a lot of those reasons.”

Gardenhire is gone. The hopefuls remain, in Mankato and other places. But hope can’t throw strikes or drive in runs. Snow will melt and spring will come, and then we will know whether the Twins truly know what they’re doing, and whether this season will be any better than the last four.

Hope in things unseen: among the (really, really) faithful on the Twins Winter Caravan