Well, that was a command performance.

Minnesota Timberwolves franchise icon Kevin Garnett commanded our loyalty by sincerely pledging his own at a “welcome back” press conference Tuesday afternoon at . It had been seven and a half years since he had last walked into the building as a member of the Wolves organization. It’s useful to put that past in perspective.

When Garnett was traded to the Boston Celtics for five players and two draft picks on the final day of July in 2007, both player and fans were exhausted with a team that seemed to be increasingly burning energy without traction as it frantically slid into entrenched mediocrity. In the years since then, we have come to appreciate exactly how hard KG labored to meet that insufficient standard.

But the streak that mattered most was three straight years without a playoff appearance, an embarrassing stretch that began with a salary mutiny by the sidekick stars (Latrell Sprewell and Sam Cassell) who had helped KG and the Wolves reach the Western Conference Finals in 2004 and reached its nadir with clumsy backup center Mark Madsen clanking three-pointers in a blatant display of tanking during the final game of the 2006 season in order for the team to secure a draft pick in the lottery.

Along the way, the failure to win after eight straight trips to the playoffs began to erode Garnett’s innate charm and perspective. He used his outsized influence within the organization to mostly disastrous ends, advocating for the signings of overpriced players such as Troy Hudson and Trenton Hassell and the free agent acquisition of Mike James, while contributing to the dismissal of coach Dwane Casey. And he became a saltier presence around the team staff and media.

We know now that it could have been worse. In Garnett’s final season here, after Casey had been canned in favor of Randy Wittman, the Wolves limped to the finish with a 32-50 record. In the seven seasons since then, has exceeded that victory total just once, and has won less than a third of its games with an overall record of 175-399.

The sort of tunnel vision that compelled us to believe mediocrity with a Hall of Famer in his prime was so terrible now inevitably colors our reactions to KG’s return, in ways that are by turns rosy and cynical.

I am an unabashed Kevin Garnett fan, but I was still shocked by how charmed I was by his words and behavior at Tuesday’s press conference. On a visceral level, I had forgotten, over these grueling years, who he is and what he means to this franchise.

I had forgotten that Garnett had been loyal to the Wolves long after everyone else had punted on the relationship. Years after then-respected national writers such as Sam Smith had literally accused Garnett of not wanting to win because he didn’t agitate for a trade to the Bulls or another more successful franchise, KG was still barricading himself inside the only NBA organization he had ever known. Just a month before the trade with went through, he had nixed a deal with the Celtics by refusing to extend his contract, which had only one year remaining. It was only after he realized how much the Wolves coveted the trade (then-GM Kevin McHale was enamored of the seven-player haul that included potential McHale prototype Al Jefferson) that he finally relented.

Yes, it is true that Garnett didn’t want to take less money when discussions were held regarding his extension with the Wolves. His performance in the seasons both prior and subsequent to those discussions have borne out that he was worth every penny of a maximum contract. Even a loyal person understands that martyrdom has its limits.

Garnett reminded us of these things with no-nonsense statements sprinkled throughout Tuesday’s press conference. He said waiving the no-trade clause that otherwise would have kept him with the Brooklyn Nets “was a hard decision because I am a very loyal person,” then proceeded to thank the Nets organization, while noting the disruption caused by a midseason trade. 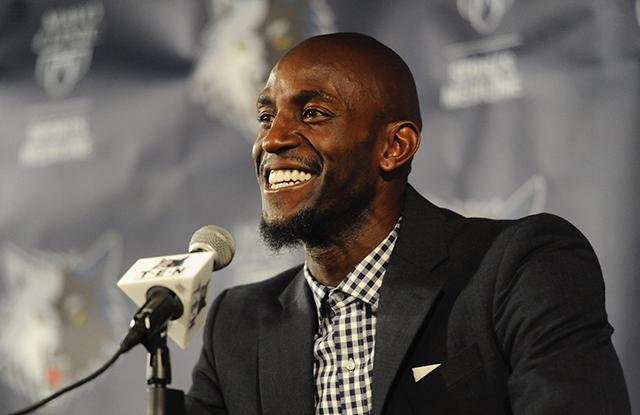 More to the point, KG acknowledged that, “I wasn’t really happy in how I left here. My goal since I’ve been in the league is to win a championship and I wanted it to be here in the Twin Cities. I’ve always wanted that.”

Hearing that, I recalled the initial anger and frustration KG expressed when the deal first went through. It was a blip, easily forgotten in the tumult surrounding this huge change that temporarily doomed the Wolves franchise and immediately produced a championship for the Celtics. And easily forgotten because we assume players don’t mind being dealt from miserable teams to star-studded playoff contenders.

Another reason Garnett’s press conference charm came as something of an ambush is because his presence in the media the past few seasons has been dominated by the excesses of his competitive streak. His angry outbursts and goofy antics are prime click-bait for websites and time-consuming fodder for talk radio.

Even so, how did I forget the soulful dude I covered for a dozen years?

Just because his physical skills are in decline doesn’t mean the thoughtful, playful, compassionate and honest facets of the man have faded. So there he was again, riffing with choice detail about how much the children of Flip Saunders have grown, providing heartfelt shout-outs to media members he recognized and helping others who were flustered by the moment get over their nerves. There he was helping Sid Hartman through his latest dotage with just the right mixture of levity, respect and diffusion. And there he was answering every tough or pertinent question — about mending strained relations with McHale and owner Glen Taylor; his role on the court and in the locker room; and his future plans to someday own the Timberwolves — with a straightforward, good-natured candor that was an informational mother lode and emotionally authentic.

He said the current Wolves roster is “the most talented team” the franchise has boasted since its inception. As for past enmity, he first said “I’ve understood that you have to forgive and forget,” then honestly amended it by emphasizing that “I won’t forget certain things” — an obvious reference to Taylor questioning his desire right after the trade — “but it’s time to move on.”

When it came to his long-term plans, both as a player and possible owner, he first deferred by remarking that he wanted to see how his body felt at the end of the season. But on a follow-up question later posed by the Strib’s Jerry Zgoda, he copped to his imagined endgame: “At some point I want to understand ownership and try to get into that and bring a championship to this city. That has been my goal since I became a Wolf.”

The pure, feel-good phrases were probably at least partially scripted in his head, but the delivery was credible.

“I figure if Lebron can go home, shiiiiit, why can’t I?” he said to great laughter. And later, when asked if it feels like his career has come full circle with this arrival back in , he sent the marketing department into paroxysms of joy with these memorable lines: “This is a fairy tale. This is a perfect ending to it…This is full-circle right here.”

Less than a week ago, I wrote about the risks of Garnett’s return to . Some of those concerns have been tweaked by recent events, but it is important to remember that this entire shebang could still eventually result in refreshed disaster. Either way, it won’t be boring.

For example, by putting his aspirations for ownership of the Wolves out in the open, KG has lessened the quotient for speculative sniping that would otherwise occur. But not the intrigue.

One could argue that Garnett has even more tactical interest in the greater goodwill of the roster knowing that he may someday be responsible for the entire bottom line. So yes, he wants to push Ricky Rubio and Andrew Wiggins to be as good as they can be, but he’d also prefer they be happy when it comes time for them to become free agents four or five years down the road. It’s a fascinating, unprecedented situation.

It was in Garnett’s best interest to be as charming as he could be on Tuesday, his reintroduction to an ownership, front office, roster and fan base of a franchise that he hopes to literally possess in a few years.

Because the press conference was both charming and authentic, this is a honeymoon period in KG’s second stint in . It doesn’t obviate all the obstacles and woe on the horizon for a ballclub with a 12-42 record in a brutally competitive Western Conference. And it won’t turn back the clock to the MVP who could control a game at both ends of the court for the Wolves on a regular basis.

In other words, Garnett is going to do some things, and say some things, that deserve to be ripped, and I look forward to doing the ripping.

But that’s because I look forward to having Kevin Garnett around again, in uniform at first and then in a suit or street clothes. I suspect that his ongoing presence will be more of a draw for free agents who might otherwise look askance at this frozen tundra. And I know that in the immediate future, the Wolves have become a more exciting team to watch. (Whether they are better or not remains an open question.)

Most of all, however, I appreciate that Garnett has knocked the mothballs of nostalgia and other hazy memories off the tailoring of his character. He has reminded me that loyalty, passion and honesty are the hallmarks of his professionalism. When it is laced with the experience of having been a superstar player who now aspires to be an NBA owner, it is a compelling force that I want — for better and for worse — to be part of the team I cover.