It would have been the elephant in the room — had they let any elephants in the room.

Wednesday’s announcement, called to celebrate the birth of the Twin Cities’ sixth major league sports team, was more pep rally than a press conference, anyway. Competing against warmer-weather cities, against a well-off rival across town, and against a turbulent history of local professional soccer, another group of well-off people — headed by former UnitedHealthcare CEO Bill McGuire — was awarded the 24th franchise in Major League Soccer.

“Remember this day when you’re mad at us for suspending your coach or fining one of your players,” joked MLS Commissioner Don Garber. He praised the ownership group, praised the community and praised their plan for a new stadium. “When you take all of that and put it all together, it gives us the perfect recipe for success,” Garber said.

Ah, the stadium: that which shall not yet be named. While there was lots of talk about a vision for a soccer-specific facility for the club, left unsaid was any discussion of how — given repeated statements from local politicians that any direct public subsidy for a stadium is a nonstarter — that vision would actually become a reality.

Wednesday’s ceremony was the formal acknowledgement of an already widely reported decision. It’s been two weeks since MLS sources confirmed that not only did the McGuire group surpass a bid by the Wilf Family, owners of the Vikings, to claim the last franchise in Major League Soccer, but that it beat out Sacramento, Las Vegas, San Antonio, St. Louis and other cities to do so. “This is a big deal for this community,” McGuire said afterward. “Lots of important, vibrant communities wanted this franchise.”

MLS considers itself different from other pro leagues in the U.S., primarily because of the fans it attracts. When citing the reasons the Twin Cities won this franchise, Garber didn’t list population or TV markets or the number of Fortune 500 companies. He instead said it is a “cool, funky, hip city” — code for a place with plenty of the kind of people who make up the core of fan bases in other places where MLS is booming, like Seattle and Portland.

“It is our total belief in the Twin Cities, a market that is young, that is diverse, that has more people driving their bicycles around than they do in Brooklyn — and Brooklyn is a pretty hip place,” Garber said. The team, which is expected to adopt the name of the lower-level club McGuire currently owns, Minnesota United, is expected to join MLS in 2018.

The presence of hipsters, of course, wasn’t the only reason the MLS was interested in the Twin Cities. McGuire’s group also includes Glen Taylor, owner of the Timberwolves and Lynx; Wendy Carlson Nelson, of the family that built the Carlson hospitality and travel empire; and the Pohlad Family, owners of the Minnesota Twins.

Key to the league’s decision was the group’s plan to build an 18,500-seat, soccer-specific, outdoor stadium with a grass playing surface adjacent to the Minneapolis Farmers Market, just west of the Target Field atrium where Wednesday’s high-gloss announcement was made. The cost for similar stadiums is in the $150 million range.

McGuire gave few specifics on Wednesday about what involvement he might request of government to get a stadium built. “We haven’t laid out anything and haven’t talked to anyone about what partnerships could play out,” he said. “We’ll bring a vision and see how people react to it.”

He did describe the stadium as part sporting venue and part stimulus for an area that has not gotten much attention since being isolated decades ago by freeways and major city arterials. 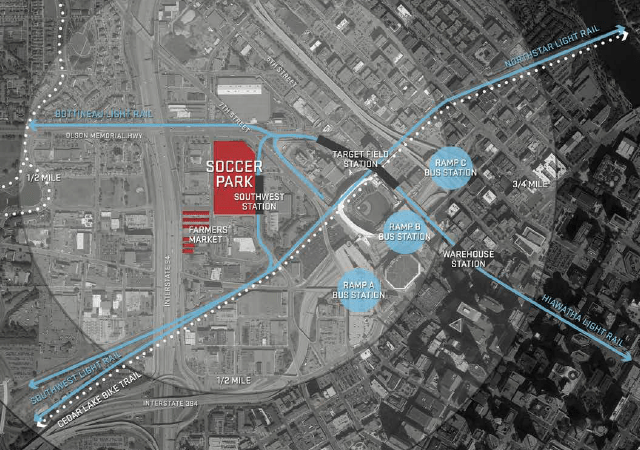 McGuire also noted that the area is currently served by light rail lines and will be near a station of the Green Line expansion. “It will help spur what many would call transportation-enhanced development in that part of town.” He promised more specifics and the public release of designs by international sports facility firm Populous within a month.

While the McGuire group has been reluctant to give up many details about their plans, one group in the city has been more fully briefed. 2020 Partners, an organization promoting development in the North Loop area, received a briefing from McGuire himself, complete with renderings of the stadium and other developments. McGuire lawyer Ralph Strangis also gave the group an update on the plans the day before the MLS announcement.

Strangis said the new owners are offering to cover a much higher percentage of the stadium costs than any other stadium-arena in the region. And he said the city and county — both with property in the stadium area — should be interested in redevelopment plans.

One possible element of that plan is to attract foodies. Strangis said the group was considering a food enterprise similar to Eataly, the popular New York and Chicago market/restaurant complexes created by celebrity chef Mario Batali. “It has been an enormous success,” Strangis told 2020 Partner members Tuesday. “It would fit really perfectly with the Farmers Market.”

Why McGuire won — and the Wilfs didn’t

While Garber said the Vikings organization, led by the Wilf family, made a strong bid, MLS has a bias toward playing not only outdoors, and not only on grass, but in stadiums built specifically for soccer. He called the 15 soccer-specific stadiums now in use in MLS “cathedrals for our league.”

“Soccer stadiums have been the literal and figurative drivers, the cornerstone of our league’s growth,” Garber said during the announcement. He later confirmed that the McGuire group’s plan for an outdoor stadium with natural grass was essential to its victory over the Wilfs.

“At the end of the day we wanted a plan for an outdoor stadium, and that’s what Bill and his partners are very focused on providing,” Garber said. “We’ve seen their original plans and they are very, very exciting. It is a perfectly situated stadium in downtown that has driven success of Major League Soccer.”

But like McGuire, Garber put off talk of stadium politics and the preemptive rejection of public help by state and local political leaders. “They are committed to building this stadium and we hope there can be support for that and have expectations that there will be,” Garber said.

As they were leaving the event announcing the decision, Minneapolis City Council members Blong Yang and Andrew Johnson both said they were enthusiastic about the team — and the stadium. “It would be disappointing if the subsidy part spoiled today,” Johnson said. “It’s a big win for the city.”

Asked whether there was a government role short of direct subsidy — infrastructure work or not assessing sales taxes on construction, for example — both said yes. “I think we’re open to that conversation,” said Yang, whose Ward 5 includes the market and stadium site.

“Who wouldn’t be excited about this?” Yang asked. “I mean, this is great. The elephant in the room is whether there’s going to be a public subsidy. But other than that, it’s fantastic.”