The Twins hosted their annual sampling of the new food being offered this season at Target Field earlier this week, and my attempt to cover all bases for you, dear reader, meant I ate a little too much, a little too fast. Oh well, service above self. Besides, my “injury” offered the perfect excuse to grab some soothing ice cream from the basement freezer.

Going into the sixth season at Target Field, the Twins are more keen than ever to provide lots of food options beyond the basic hot dog and soda. That’s a no-brainer. The ballpark remains the single best thing the franchise has going for it — it’s still beautiful, and still among the best facilities in Major League Baseball. Until the on-field product improves, the least the Twins can do is to make sure their fans eat well.

It wasn’t always thus. When Target Field opened, Delaware North’s Sportservice, a nationwide food vendor, tried to create knockoffs of popular local foodstuffs, and it quickly became clear that something got lost in translation. Credit the Twins for quickly figuring out that it would be much better to simply ask Murray’s to craft a steak sandwich or Kramarczuk’s to bring in one of their trademark sausages. So, more and more, the Twins have recruited local restaurants and food trucks to offer their signature items at the stadium.

With Target Field hosting the Twins home opener against the Kansas City Royals on Monday, I put together the following rundown — a lineup, if you will — of Target Field’s newest culinary offerings, complete with a sure-fire way for baseball lovers to get a sense of exactly what they’re in for. Batter up. And bon appetit.

The item: Ultimate Red Cow Burger
Where to find it: the Red Cow cart, near section 126
Appeals to: slightly adventurous burger lovers
If it were a player, it would be: Max Scherzer

This is the foodie equivalent of the big-splash free agent signing the Twins didn’t make on the field. I’m a Red Cow fan, and the introduction of this upscale burger joint to the Target Field lineup is the second-best news a Twins fan could ask for. (The best would have been signing Scherzer himself, but that’s another story for another day.) 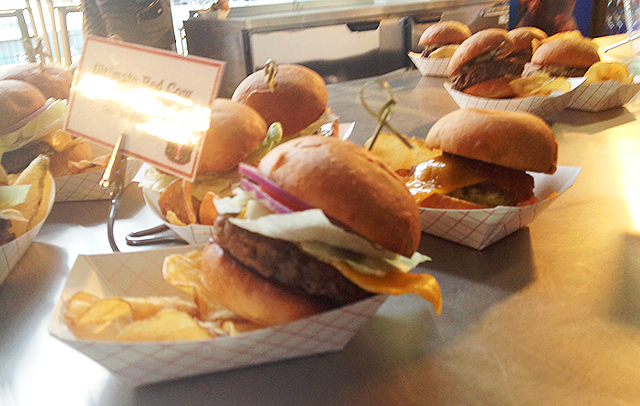 Red Cow owner Luke Shimp said the Twins approached him about opening a stand several months ago. The chance to expand Red Cow’s reach beyond their three neighborhood locations overrode Shimp’s worry about replicating his stylish burgers under imperfect conditions.  “It’s great brand exposure,” Shimp said. “Even if people don’t buy one of our burgers here, when they pass by and see our logo, maybe they will think of us the next time they’re out for a burger.”

The item: Deep Fried Pickle Sandwich
Where to find it: the Taste of Target Field food truck, outside the stadium
Appeals to: the daring
If it were a player, it would be: Ricky Nolasco 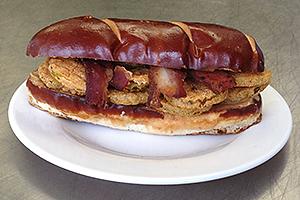 Why Nolasco? Because, like the Twins right-hander, just the idea of a deep-fried pickle sandwich sounds really shaky. And the other ingredients – beer-braised bacon and peanut butter, all on a pretzel roll – sent a few of my less brave colleagues fleeing before they even tried this item. But you know what? Taste of Target Field food truck sous chef Keith Endres’s creation is actually pretty good. You taste the peanut butter more than anything, but the bacon has a unique flavor that doesn’t overpower. And it’s a good deal for $6. (Nolasco himself should be such a pleasant surprise; he certainly can’t compete on value.) The catch: The pickle sandwich is only sold on the food truck, which isn’t always at the ballpark, though — at lunchtime on weekdays — you can almost always find it parked on Marquette or Second Avenues in downtown Minneapolis.

The item: Korean Fried Chicken Sandwich
Where to find: the AZ Canteen stand, near section 114
Appeals to: the Eat Street crowd
If it were player, it would be: Glen Perkins 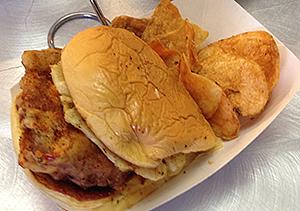 I can’t be the only one who hesitates trying anything pitched by Andrew Zimmern, purveyor of AZ Canteen and the star chef and fellow expat New Yorker who eats bugs and monkey brains on his Travel Channel show, Bizarre Foods. Sorry, but I find it hard to trust a dude who willingly devours slimy, wiggling creatures like they’re Baci chocolates. But he does it with such panache, and sometimes you just have to take the plunge.

Having never tasted Korean fried chicken in an actual Korean restaurant, I can’t tell you how close this sandwich comes to authentic. But it’s tasty. It comes with grilled pineapple, chili lime slaw and a spicy dip that isn’t terribly spicy (this is Minnesota, after all). It costs $13 with chips.  So why is it the Glen Perkins of foods? Because it’s really good — and a little different. 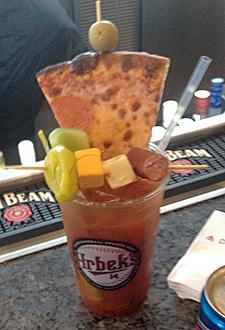 The item: College Daze Bloody Mary
Where to find: Hrbek’s Pub
Appeals to: frat boys
If it were a player (or manager), it would be: Billy Martin

Too bad for Billy that he didn’t live long enough to quaff one of these. Here’s the conceit: You wake up in your dorm room, squint into the refrigerator, then throw everything that hasn’t spoiled into a Bloody Mary. Meat, olives, cheese, celery, the works. And, yes, that is a slice of cold pepperoni pizza you see sticking out of this $19 monstrosity. I can almost hear Kent Hrbek laughing when someone described it to him. The scary thing is, I actually knew guys in college who would take this as a challenge. Far be it for me to tell anyone what to put in a Bloody Mary, so have at it. It’s only available in Hrbek’s Pub. Comes with a short beer chaser (naturally).

The item: BratDog
Where to find: Hrbek’s Pub
Appeals to: those with cast-iron stomachs
If it were a player, it would be: Kent Hrbek 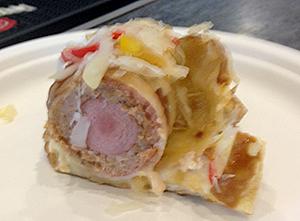 This is somebody’s take on a turducken, the meat-inside-a-meat-inside-a-meat that was the rage a few years ago. It’s a hot dog inside a brat, wrapped in bacon and served on a pretzel roll with sauerkraut, caramelized onions and peppers. In other words, it sounds like something right in Hrbek’s sizeable, uh, wheelhouse. Of all the things I tried, this was the only item I hesitated before tasting — and wished I skipped. One bite was all I could handle. There is just way too much going on. But maybe not for you. It’s $12 with fries, also exclusive to Hrbek’s Pub.

The item: Vegan Aloo Gobi
Where to find it: the Hot Indian Foods cart, near section 120
Appeals to: non-carnivores; anybody who likes Indian food
If it were a player, it would be: Ichiro Suzuki 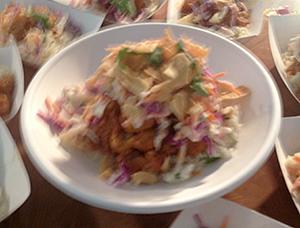 Now in his 15th season in the U.S., Ichiro plays with a unique flair. The high leg kick in the batter’s box. Flicking the bat to hit impossibly low pitches. The speed down the line. Nobody does it like Ichiro. Same with this simple, flavorful dish from Hot Indian Foods, of food truck and Midtown Global Market fame. This dish features potatoes, cauliflower and squash in a spicy-but-not-too-spicy creamy tomato curry. Good stuff, a little hot but not debilitating. It comes with garlic and coconut toasted rice, crispy poppadum (a thin, round Indian bread) and hot Indian slaw. A fair amount of food for $11. Hot Indian Foods also offer chicken tikka, a yogurt-marinated chicken breast in that same curry with the same accoutrements, also for $11. Lots of folks liked that as well.

The item: Schwan’s Caprese Stacked Burger
Where to find it: in the Legends Club, near Section R
Appeals to: smooth operators; outstate farmers
If it were a player, it would be: Joe DiMaggio

To me, Caprese means classic, comfortable and Italian, while the Schwan’s name resonates with generations of Upper Midwest farm families who remember those butter yellow trucks delivering frozen foods. Schwan’s might not be hip enough for the North Loop crowd, but everything can’t be craft cocktails and small plates.  For an Italian-American like me, nothing says summer like a nice Caprese — slices of fresh mozzarella and marinated tomatoes with basil and a little olive oil. Schwan’s, the Marshall-based brand, incorporates these ingredients into a twin-patty burger, available at their stand in the Legends Club. In fairness, now isn’t the best time of year to trot this out. It’s not tomato season yet, and the out-of-town stuff can be tasteless and mushy. I’d wait a little longer to give this a whirl. Schwan’s also offers a BBQ Bacon Stacked Burger — both are $13 — and Italian and Buffalo Chicken flatbreads for $10.50.

The item: anything from Barrio
Where to find it: just inside Gate 6, near the light rail station
Appeals to: those who don’t mind having a ball game interrupt bar time
If it were a player, it would be: Kennys Vargas

Like Vargas, Barrio has the ability to pull ‘em into left field. Indeed, the Barrio bar and restaurant is something of a blatant attempt to please a younger, hipper crowd, and why not? With the Fulton Tap Room just up the street and brewpubs opening all over Twin Cities every month, the Twins needed an outdoor destination bar in the ballpark to keep pace. Food includes carnitas (pork) soft tacos with diced onion, cilantro and lime. One tip: dress warmly on those windy days; the heating coils in the ceiling don’t help much. Still, on those those days when Twins are losing 6-0 in the fourth, this may be the best place to cry in your tequila — or regale your friends with accounts of that Red Cow burger.

If the newest foods at Target Field were baseball players, who would they be?