Bill McGuire, the owner of a lower-level professional soccer franchise with dreams of going major league, might have been envious of the other men on a panel Wednesday talking about the business of sports in the Twin Cities.

On the panel sponsored by the Minneapolis/St. Paul Business Journal were the owners of the football Vikings, baseball Twins and hockey Wild. All three are enjoying success  on the bottom line, if not the playing field, due partly to revenue from stadiums built with large public subsidies.

At one end was Zygi Wilf, whose family owns the Minnesota Vikings, talking about the excitement building on the eastern edge of downtown Minneapolis with the construction of the new stadium. Public subsidy? $500 million.

Next came Jim Pohlad, part of the family that owns the Minnesota Twins who are having on-field success in a Target Field built with the help of $355 million in public money.

Finally, Craig Leipold of the Wild spoke about how he needs to update the oldest of the stadiums represented on the panel, Xcel Energy Arena, which was built with $130 million in public cash.

Those subsidies have made wealthy men even wealthier as new stadiums greatly increase the value of pro sports franchises, according to annual assessments by Forbes.

Even the minor league St. Paul Saints, whose month-old stadium could be seen from the A’BULAE event center where the morning panel discussion was held, benefited from a $51 million subsidy.

Yet, among the first questions posed to McGuire by Business Journal reporter Nick Halter was about how he was so-far failing to get any support for a proposed soccer-specific stadium for his team Minnesota United FC. Unlike the others, McGuire is asking for no direct cash, only forgiveness of construction sales taxes and the property taxes on the new stadium. The value has been estimated at a few million dollars a year.

“On the stadium front the good news is we’ve had to add new seats in Blaine. They’re full up,” he said of the National Soccer Center field where the Minnesota United FC of the North American Soccer League now play. “The worse news is there are challenges in terms of getting the legislative community on board to do much of anything right now.”

As pessimistic as McGuire sounded, he might have been too optimistic. While there is some movement with some members of the Minneapolis City Council on some details of a deal, even if those bear fruit he must get past a mayor who is opposed and then win permission from an indifferent, if not hostile, legislature.

McGuire isn’t exactly impoverished. Neither are the other members of the group he pulled together to buy the franchise and build a stadium just west of Target Field. The former CEO of UnitedHealth, who bought the team to keep the franchise from folding, described his ownership group as committed to making big league soccer work in the Twin Cities. But he has said the tax breaks are needed to have the franchise reach an operating break-even point.

One piece of positive news for supporters of the team and the stadium project is that McGuire repeated that he isn’t aware of any deadlines set by the league despite reports that commissioner Don Garber had, when pushed by a reporter following the April announcement, said the league would like to see a deal completed by July.

“I’m not even sure I remember what Don said,” McGuire said. “But I wouldn’t get too caught up about hard deadlines. The reality is MLS is a hot commodity right now.” He said there could be another franchise announcement for another city this week.

Can the market support another team?

The four team owners were asked whether the Twin Cities and the state of Minnesota could support five major league teams as well as a Big 10 college sports program. All said it could. Leipold said he didn’t think hockey and soccer shared the same fan base. And Wilf said the presence of so many Fortune 500 companies created a strong market for sponsorships.

Pohlad, who is a partner in the soccer ownership group, acknowledged that an additional team would be a challenge. 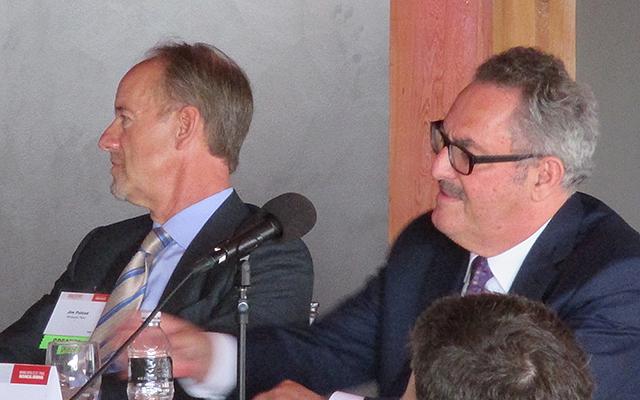 MinnPost photo by Peter Callaghan
Jim Pohlad of the Twins and Zygi Wilf of the Vikings discussed public subsidies and the Twin Cities being able to support five major league teams.

“The pool (of potential sponsors) is not shrinking but it is finite. There will be competition, there’s no question about it,” Pohlad said. “But MLS selected the Twin Cities because of the great market it is and the ability of MLS to succeed here along with the other major sports. We’re totally confident.”

McGuire had to field a question from the business audience that has hounded the effort to build a soccer-specific stadium in the Farmers Market area: why can’t his team play in TCF Bank Stadium or the new Vikings stadium? MLS wants outdoor stadiums tailored to the dimensions of the sport and that it only reluctantly lets a few franchises play on artificial turf. The Vikings stadium is inside and TCF has turf.

But he then noted that the other franchises shared facilities in the past — baseball with football, hockey with basketball —before demanding subsidies for stand-alone stadiums and arenas and eventually receiving them from elected officials.

Where MLS teams have succeeded, they have stadiums built for the sport, McGuire said. That is, “as you’ve heard with baseball football and hockey, a key element, that the facilities are aligned with the sport and a particular fan experience.”

Later, McGuire commented that he felt like a “minnow” after the other owners spoke about their processes for making roster decisions. McGuire said he might get involved if a decision would stretch an already thin budget. United’s player budget is around $2 million. At the Major League Soccer level, payrolls for entire teams are about $4 million.

By comparison, the Vikings player payroll is $162 million a year, the Twins $109 million, the Wild $83 million. Put another way, an entire Major League Soccer team payroll is about what the average Major League Baseball player earns.

Can Bill McGuire get what Zygi Wilf, Jim Pohlad and Craig Leipold got? They discussed.