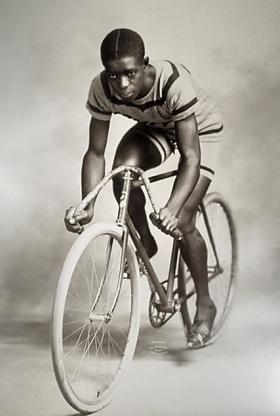 The National Brotherhood of Cyclists (NBC) was formed in 2008 by a group of African-American grassroots cycling clubs from around the country. The groups – including Minneapolis’s own North Minneapolis Bicycle Advocacy Council, the Minnesota Black Riders Association, and Major Taylor Minnesota —  are all about fun, fellowship and fitness, and a means to honor Marshall “Major” Taylor, who in 1899 became the first African-American world cycling champion and whose pre-Jackie Robinson and pre-Jesse Owens accomplishments now demand a major retelling and celebration.

This week has been dubbed Black Bike Week in Minneapolis, with NBC’s annual national conference happening here and events taking place today through Friday, including an all-day health and fitness seminar Wednesday and a Thursday night slow ride in the city. Minnpost caught up with some of the cyclists at Tuesday night’s welcome reception at the Bohemian River Flats in Minneapolis, to talk about the importance of the National Brotherhood of Cyclists and Taylor’s lasting influence. 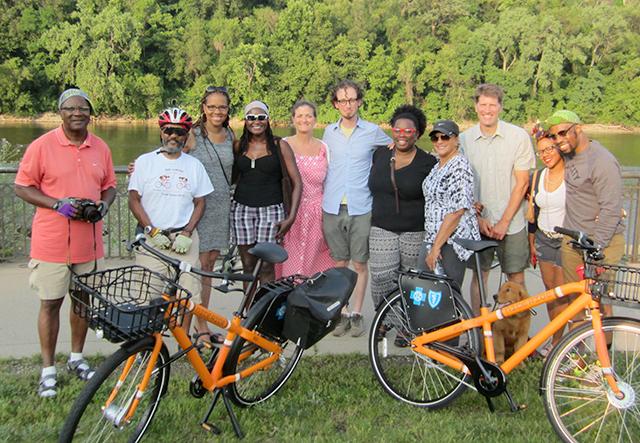 Members of the African-American bicycling club Major Taylor Minnesota gathered at the Bohemian River Flats on the West Bank of the Mississippi River Tuesday evening for a welcome reception for the National Brotherhood of Cyclists convention being held in Minneapolis this week. The group is pictured with bikes from the Orange Ride program, which provides affordable bike rentals and organizes regular rides in the African-American community. 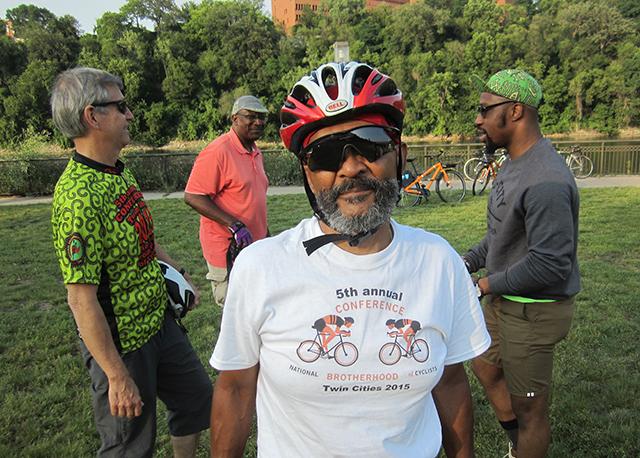 Louis Moore: “I’m president of Major Taylor Minnesota. Major Taylor is a historical figure that not a lot of people knew anything about until about 10, 15 years ago and then all of a sudden people became aware of what he did. He was the fastest human being in the world from 1899 to 1903, 1904. He set land speed records on his bike, he raced 162 races and won 117 of ’em. These are on steel bikes, one speed, hard rubber tires. He was a phenomenal athlete; he was the Lance Armstrong of the time. The only difference is he was black, and because he was black he suffered a lot of humiliation from a lot of the white riders when he raced.

“I read his story in about 1997, and when we decided to form the Major Taylor Bicycling Club, which was formed in 1999, I talked about the book and it didn’t take but two minutes for them to decide to call it the Major Taylor Bicycling Club. The thing that was interesting is there are lots of Major Taylor bicycling clubs around the country, and we didn’t even know about them. That was a time when the Internet was really beginning to click and people were starting to communicate, and we looked up and there were six, eight other clubs with the same name. Two in New York, one in L.A., one in Oakland, and one in Columbus. There’s a whole bunch of ‘em now.” 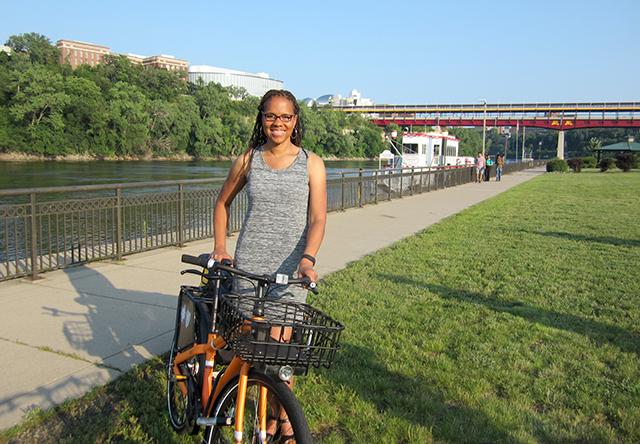 Dacia Durham, Minneapolis: “He was a clean-living athlete; no drugs, didn’t race on Sundays; church … I don’t know anyone who lives like that, much less back in 1899. Plus, just dealing with overt racism and hate and having people change the trails and the paths and the roads on him and he still comes back and wins. I mean, come on. Part of the mission of the NBC is to get the word out on him. There’s been talk of a movie for a long time, and hopefully events like we’re having will get the word out on him more.

“When I did the AIDS Ride in California in 2000, there were at least 30 black cyclists on that ride and we were all sitting around talking and at one point someone said, ‘Wouldn’t it be great if we could have a national black conference and all the black cyclists would come out?’ And we were all like, ‘Yeah, that sounds great,’ but then nothing until 2010 when we had the first year of the conference, in St. Paul.” 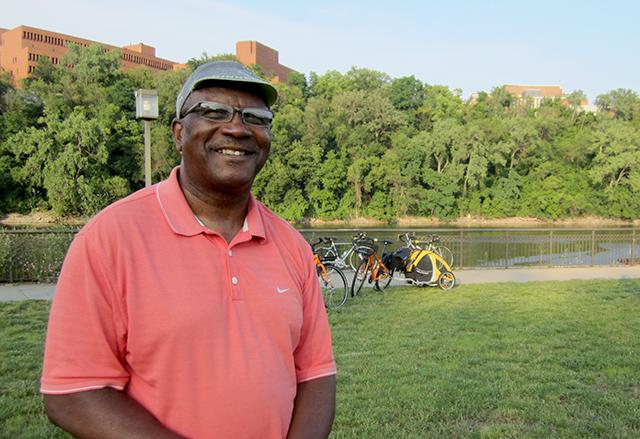 Walter Griffin, Minneapolis: “I’ve known about Major Taylor for 40 years, whereas a lot of people have not known about it. What we try to do is pass the information on to everybody, to let them know how important Major Taylor was to cycling and especially to black America. People who race know who he was, because they respect what he did. He was widely accepted in Japan, as opposed to America, because of Jim Crow laws. They wouldn’t let him race in the Tour de France because he was black.” 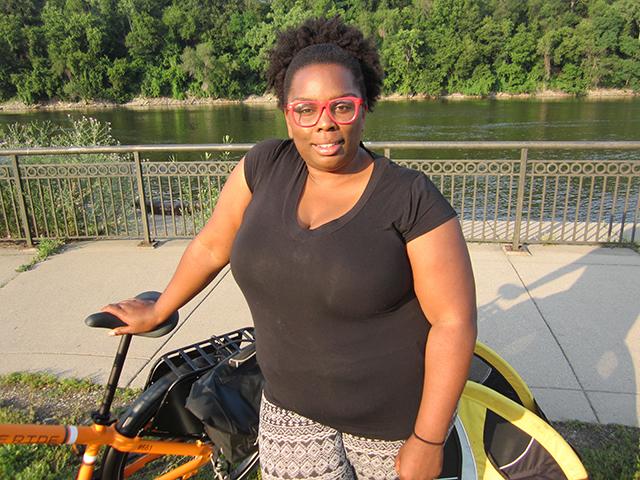 Adrian Lipscomb, Austin, Texas: “I’m a bicycle coordinator for the city of Austin. It’s very beautiful here; Austin is a very bicycle-friendly community, also. We learn from one another, and we work well with each other. You’ve probably heard, ‘Black people don’t cycle’ or ‘It’s a hipster thing,’ but I think it’s also an account of what people see and their perception of. Bicycling has been a novelty for many years, and it has become an upspring right now where cycling is a community engagement process. You hear this myth that black people don’t cycle, but you see this uptick in clubs like Black Girls Do Bike, and they’re saying, ‘We do cycle.’

“I’ve always been here, I’ve always cycled. I might not have seen many black people all cycle all in one place, but we are there. It’s mostly seen as African-Americans have used it as a necessity, as a form of transportation. It’s never been seen as a choice – as a recreational choice, a lifestyle choice, or just a choice of a mode – so this is a great opportunity to get people together to banish that myth that’s kind of happening.” 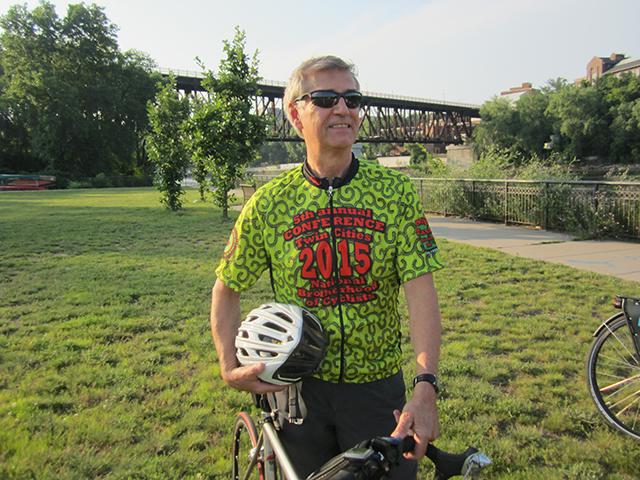 Pat Besanon, Minneapolis: “Nobody discriminates in the Major Taylor bicycle club, and that’s true. I joined one or two years after the group was formed, just because I saw a bunch of guys with cool bikes getting together outside Kirk Anderson’s gas station on 46th and Clinton in South Minneapolis and I said, ‘Can I ride with you?’ And they said, ‘Sure.’ That must be 12 years ago now.” 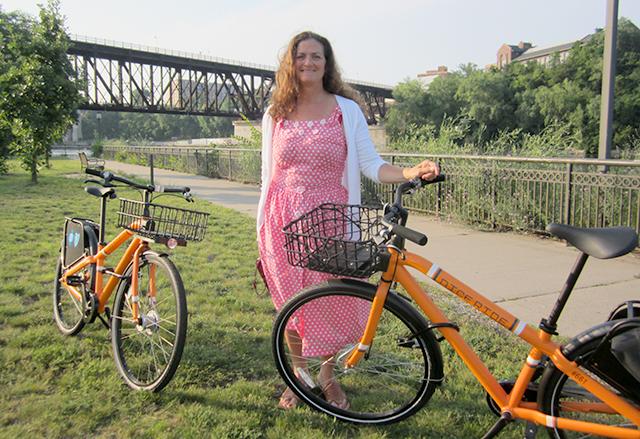 Carolyn Stanley, Bloomington: “The bike is also known as the freedom machine, and it doesn’t discriminate, and it welcomes, and this club in particular welcomes – to come hang out and ride, and I found out about the club because of a ride they did to honor the 50th anniversary of the march on Washington. It was a ride that was symbolic of the underground railroad, and we rode around from 9 p.m. to 6 a.m., checking out all the historically significant areas in the Twin Cities. I bought a new road bike for that ride, and I felt like I was soaring, and the people were so inclusive and so welcoming.” 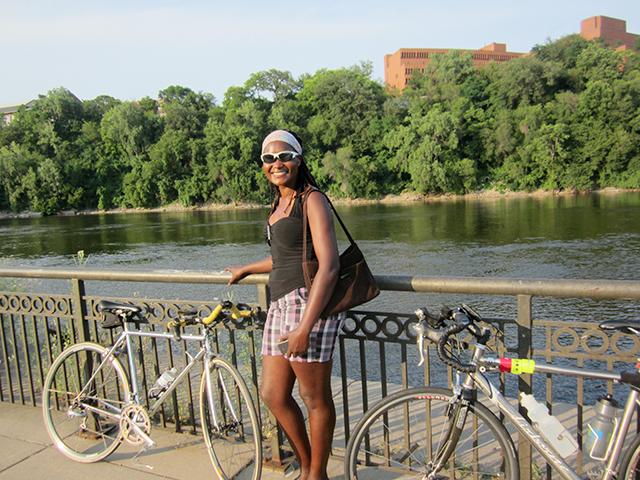 Jacquie Kerongo, Minneapolis-by-way-of-Kenya: “I am a cyclist, and this is important to be together as brothers and sisters. And also extend, like all of us, all colors, we are all equal and we are all one. It’s so important that we are all together here as one.”