If you watched Seinfeld as diligently as some of us, you probably remember “The Summer of George,” the 1997 episode where a suddenly unemployed George Costanza took his three-month severance from the Yankees as a cue to declare the upcoming summer his own.  Costanza being Costanza, laziness intervened, and he never followed through on anything he intended to do.

When the Minnesota Twins released minor leaguer Mike Kvasnicka at the end of spring training last March, the former University of Minnesota standout weighed his own list of summer options. Kvasnicka, 26, was sick of riding the prospect/suspect elevator that burdens so many high-round draft picks. His wife Kim, a nurse in Burnsville, was pregnant with their first child. He hadn’t spent a summer in Minnesota since college. So Kvasnicka decided to come home to Golden Valley, be there for Kim, and return to the U to finish his youth studies degree.

The Summer of Mike. Why not?

“If I’m not motivated enough to get my agent to find a team, no matter what level it is, that’s pretty telling,” he said. “I should just go home.”

Playing for the Saints in the independent American Association had some appeal. Kvasnicka would be able live at home. He could grill lunch on his patio if he felt like it, commute a half hour to beautiful new CHS Field in St. Paul’s Lowertown neighborhood, yet be near Kim through the pregnancy. Without prospect pressure, baseball might actually be fun again. On April 2, he signed.

“I got a little bit of a push from my wife to do it,” Kvasnicka said. “I was kind of torn. Should I just go to school, take a bunch of classes, take the summer off? She kind of helped me go through with it – play the game the way it was meant to be played, have fun and win.

Yes it has. Kvasnicka is batting .333 for the 36-10 Saints, who own the league’s best record and lead the North Division by a remarkable 16 games going into this weekend.

A switch-hitter, Kvasnicka tied a club record with three home runs (two righty and one lefty) against Fargo-Moorhead on June 26. He already has two four-hit games, most recently last Monday, and his .560 slugging percentage ranks fourth in the league. Kvasnicka’s two-run double Thursday night gave him 35 RBI, three behind teammate and league leader Vinny DiFazio, along with six homers in 38 games.

“This is exactly what I hoped it would be, and more,” Kvasnicka said in the hallway outside the Saints clubhouse earlier this week. “I didn’t really know quite how much I would enjoy it – the team, the schedule, the place, the fans, averaging 7,400 or whatever a night (actually a league-best 7,854). It’s awesome. I get to do it all for fun. It’s a totally different perspective to have, and I’m really glad that it worked out.”

The Saints kept rolling even with six starting position players, including Kvasnicka, spending time on the disabled list. Kvasnicka’s left ankle has been sore for a month since getting hit with an outfield throw running the bases. But Tsamis said Kvasnicka refuses to take a day off.

“When a guy gets released from an organization and he’s from the area, you do the best you can to try to make it work,” Tsamis said. “He lives, what, a half hour away. I knew his dad. We had a need. He’s come in here and done a good job.”

The guy who collided with Byron Buxton

First round picks are supposed to be guaranteed major-leaguers. It didn’t work out that way for Kvasnicka, the 33rd overall choice in a loaded 2010 draft that produced MLB stars Bryce Harper, Manny Machado, Matt Harvey and Chris Sale.

In college, Kvasnicka converted from right field to catcher and learned switch-hitting to improve his draft standing. He projected first round as a catcher, significantly lower as an outfielder. Every team that contacted him, Kvasnicka said, wanted him to catch.

But Houston, which chose him in the supplemental phase, tried him at third base, a position he hadn’t played since his junior year at Lakeville North High.

The experiment flopped. Kvasnicka committed 40 errors in 141 games over two seasons in rookie ball and Class A before the Astros gave up on it. Kvasnicka shuttled between right field and catcher in 2012, and that winter the Astros traded him to the Twins organization.

“I didn’t feel very comfortable,” Kvasnicka said. “I could play right field in my sleep. I thought I could be a pretty good catcher, too, but I never thought I’d have to try to field ground balls again, especially at the hot corner. It just didn’t feel natural. I wasn’t back to a comfortable place until two years after I was drafted. That’s not an excuse or anything, but it would have been a smoother transition, that’s for sure.” 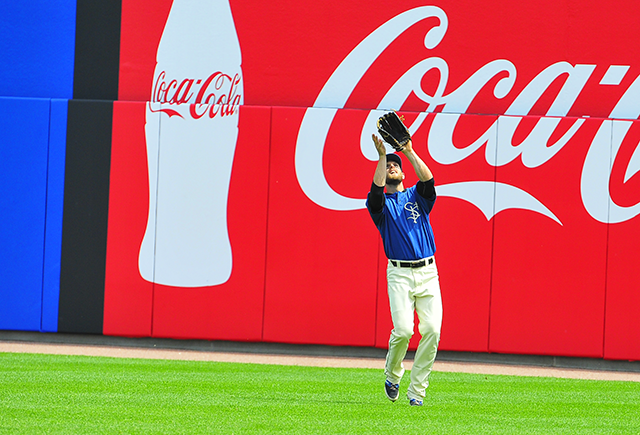 Courtesy of the St. Paul Saints
Mike Kvasnicka: “It’s awesome. I get to do it all for fun. It’s a totally different perspective to have, and I’m really glad that it worked out.”

Buxton suffered a season-ending concussion. Kvasnicka said he never expected Buxton, a teammate at Class A Fort Myers the year before, to get anywhere near the ball, which Kvasnicka caught. Kvasnicka said they laughed about it this spring at an intrasquad game, when a Miguel Sano fly ball dropped between them after they eyeballed each other closing on it.

“I did a phone interview and they said, `You’re always going be known as the guy who hit Buxton,’” Kvasnicka said. “I’m like, `Whatever. At least I’d like you to word it, the guy who Buxton hit.’” (Kvasnicka added he hasn’t been in touch with Buxton since his callup to the Twins, something he plans to rectify. Buxton sprained his left thumb last week and will be out at least another month.)

‘Thanks but no thanks’

The Twins released Kvasnicka to clear room for faster-rising prospects. Kvasnicka said the stress of trying to live up to first round expectations eventually wore him out. “It’s job where, a lot faster than corporate America, if you underperform or overperform, you will move,” he said. “It’s hard not to think about that. Am I doing enough to earn a promotion? Am I doing not enough to even keep my current job?

“It’s stuff like that where sometimes it does really feel like a grind. And the guys who don’t ever feel like it’s a grind, more power to them. But I think that probably less than half the guys feel like that. Everybody’s got to come to grips with it and just kind of handle it from there. I was definitely excited to be away from that aspect of it.”

Overall, life is good. Last weekend Kvasnicka finished assembling the nursery for their baby boy due in early September. On Tuesday, he and Kim walked around Lake Calhoun on a beautiful late morning intending to hit Tin Fish for fish tacos. A huge line necessitated a Plan B: French Meadow Bakery. Later at the ballpark, Mike finished the bibliography for an online class assignment before heading to the batting cages.

The Saints have sold 110 players to major-league organizations since 1993, and this is the time of year scouts scour independent leagues for minor-league help. Kvasnicka isn’t expecting a call. But if one comes, he has an answer prepared.

“Thanks, but no thanks,” he said. “I’ll keep my lunch dates at French Meadow and Tin Fish.

“I’ve been there. I know what it is. I went all the way up to Double A, and got a pretty good idea what Triple A feels like. I’m ready to move on. It has nothing to do with the politics or anything like that. I’ve been able to play this game quite awhile, for as long as I can remember, and this year feels like the perfect way to cap off a career.”

The Summer of Mike will proceed as planned.

The final season: How a former top prospect rediscovered his love of baseball with the Saints