On the back patio of Nomad World Pub last week, at a table beneath a shady tree, Abe Opoti and Patrick Phenow debated the future of local professional soccer. This engaging conversation among pals proved ten times more insightful and nuanced than anything you’re likely to hear on local sports talk radio, about anything.

Soccer is king at the Nomad, in the West Bank neighborhood of Minneapolis, and a few dozen of the 500 or so Dark Clouds congregate there for watch parties when United plays on the road. United owner Dr. Bill McGuire and his son-in-law, team president Nick Rogers, staked out a corner of the bar to watch the on-again, off-again live stream of United and the New York Cosmos on one of the bar’s flat-screen televisions.

Outside, the discussion centered on the Twin Cities as an MLS soccer market. United sold about 1,000 new season tickets after MLS announced its Minnesota expansion plans in late March, Rogers said. Average attendance jumped so much, from about 5,000 per match to 9,000, that United added more bleachers at its home field, at the National Sports Center in Blaine.

“I think there are two ways they can get to 20,000,” said Phenow, a 34-year-old transportation planner for MnDOT who lives in Minneapolis. “If they move back to downtown, especially downtown Minneapolis. A lot of people, myself included, don’t go to as many games because they play in Blaine. And if it’s an MLS team. I think the United can compete with a lot of MLS teams.”

Opoti arrived at the Nomad in proper United regalia, a black-and-slate-gray team jersey with matching scarf. But Phenow sported the white jersey of his favorite team, Tottenham Hotspur in the English Premier League. The “AIA” on the front reflected the Asian insurance company that sponsors the club (for a reported $25 million a year). Phenow loves the Spurs but embraces United as well.

That’s the key to the answer.

Many Premier League fans look down their noses at American soccer as sub-standard. But MLS is growing on some of them. The challenge, if  United builds a new stadium at the Minneapolis Farmer’s Market or the old bus barn site in St. Paul, will be getting those folks behind the club and into seats.

He has a point. The St. Paul Saints just broke their franchise attendance record in their first year at CHS Field. University of Minnesota football sold out its entire home schedule when TCF Bank Stadium opened in 2009, and the Twins sold out virtually every game its first two years at Target Field.

But TCF Banks and Target Field crowds eventually fell off. Rogers and his staff are working to not only build United’s fan base, but sustain it.

Blaine is tough to reach without a car, discouraging attendance among two groups that include a sizable number of soccer-loving non-drivers: immigrants and millennials. The Dark Clouds rent a school bus from the Nomad to Blaine on game days, at $10 a head. McGuire turned down an overture from Canterbury Park in Shakopee to build there because another suburban site doesn’t solve the problem.

Crowds at United’s last two home matches, against Jacksonville on July 15 and FC Edmonton on Aug. 9, were overwhelmingly white, with a few hundred East Africans and Hispanics. United drew a franchise record 9,412 the first night, which coincided with the USA Cup international youth tournament, and 9,077 the second, when part of Interstate 35 – the primary route from Minneapolis — was closed for construction. Both games were televised locally and live-streamed.

“It’s a challenge, not just for those communities, but for a lot of people to get to Blaine,” Rogers said. “There is no public transportation that comes here at all – no buses, no light rail. In that context, it makes the attendance numbers we’ve been doing this year even more impressive. I think when we’re in a place that’s more accessible, you’ll see a lot of different groups show up.”

Those who did were certainly boisterous. Fans seemed knowledgeable, well-behaved and entertained. Food was reasonably priced – no $4.50 bottles of water like some places we know — and popular food trucks parked around the stadium perimeter offered lots of exotic options. 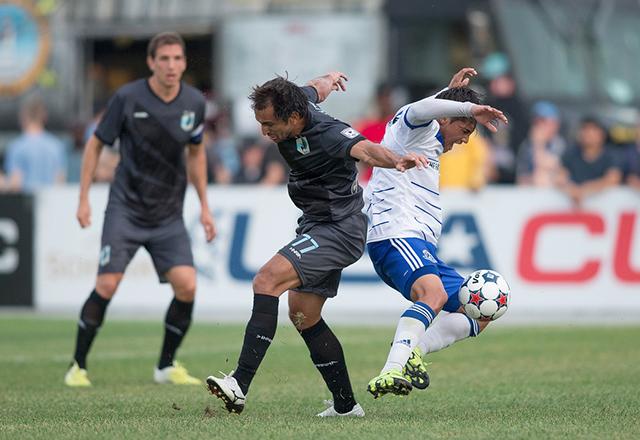 “It’s a great live experience and a great game atmosphere,” said United Coach Manny Lagos, the former Minnesota Thunder star and reigning NASL Coach of the Year. “You don’t just flip a switch and turn this on. A lot of people have turned this into a golden gem, and they want to be a part of it.”

After the Jacksonville game, which United won 4-0, top scorer Christian Ramirez said: “From TV, my parents said it looked awesome. You wouldn’t think that we were in Blaine.”

In the southern corner of the bleachers, across from the team benches, the Dark Clouds jumped around and sang silly songs the entire match, taking cues from leaders on wooden risers with megaphones. Someone set off a smoke machine after United goals.

“I brought somebody from the Timberwolves here a few weeks ago and they asked me, `How do you get them to stand and cheer the whole game?’” Rogers said. “I said, `I can’t get them to do anything. They do what they want.’

“We’re fortunate to have these guys be so self-policing and so conscientious about what they’re doing, because other clubs have groups and they have to deal with all sorts of problems, whether it’s violence, racism, homophobia. We don’t deal with any of that right now, so we’re very lucky.”

The Dark Clouds were formed in 2004 to support the amateur Minnesota Thunder. “You can’t have thunder without dark clouds,” said Bruce McGuire, the group’s 53-year-old bearded patriarch who is no relation to Bill.

When the Thunder folded in 2009, the Dark Clouds moved on to the Minnesota Stars, which became Minnesota United after McGuire bought the struggling franchise in 2012. Pre-game tailgating finds graying, well-travelled soccer fans like Bruce McGuire mingling with North Loop hipsters and newbies like Opoti, who bought United season tickets in part to protest the Vikings stadium legislation.

Opoti and his father owned Vikings season tickets since 1999. But it annoyed him that the bill included personal seat licenses, and circumvented the referendum required by the Minneapolis city charter.

“I was pissed at the Vikings,” he said. “I was mad that I didn’t get to vote. I probably would have voted yes anyway, but I didn’t get the chance. I started reading more and more. How did people not think there were going to be PSLs? That’s what the NFL does.”

Instead, for the same price as his Vikings tickets, Opoti kept his Gopher football season tickets and added United. “I knew friends who were jumping in because it was pre-MLS, and they didn’t want to be late to the party,” Opoti said. “I knew six different people who did that.”