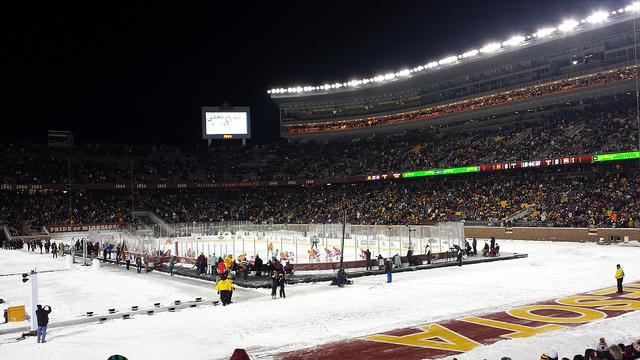 This is what you wanted, hockey fans — an outdoor NHL game right here in the State of You Know What, where the cheapest ticket for the privilege of freezing your keister in February will cost more than a hundred bucks, and the top ticket matches what I just paid to fly round trip to New York.

Evidently not. NHL Commissioner Gary Bettman was fortunate none of the fans ripping the league for price-gouging found their way on Wednesday into TCF Bank Stadium, where Bettman and various Wild and Chicago Blackhawks luminaries promoted the Stadium Series game to be held there Feb. 21. Bettman has this odd habit of taking a half-step backward when asked a tough question, and he might have moonwalked all the way down University Avenue if any of the complainants got near him.

The tone of the 37 comments left on Star Tribune beat writer Michael Russo’s popular blog by Thursday afternoon was something well short of “hooray.” One commenter described the pricing, set by the NHL, as obscene. Another wrote he would buy a ticket only if he could punch Bettman in the face. Many vowed to stay home.

That’s understandable. And it ought to be disconcerting to Wild owner Craig Leipold, who lobbied Bettman for years to get an outdoor game here. Since, as Chicago president and CEO John McDonough noted, Blackhawks fans “come heavy — they travel, they will be here,” the Wild might be booed and taunted on their own turf. How obnoxious would that be?

Even Zach Parise sounded less than thrilled about meeting the Blackhawks, who bounced the Wild from the playoffs three years running.

“They’ve got our number right now,” Parise said. “We have a lot of work to do to get to their level. Having our team being involved in it finally, it’s kind of a perfect matchup, to have these guys come.”

These games are often a lot more fun for the players and coaches than the fans. Anyone with experience at one of these outdoor extravaganzas — I’ve been to two, the 2009 NHL Winter Classic at Wrigley Field and last year’s collegiate Hockey City Classic at TCF Bank — will tell you Leipold’s claim of “great sightlines” at TCF Bank Stadium is a stretch.

It’s a football stadium. The rink will be in the middle of the field far from the stands. People, equipment and TV cameras obstruct field level views, so the best seating is higher up. That’s why the NHL charges top dollar for second deck seats between the goal lines ($449, $359 and $299), and substantially less at field level ($109). Your great seat for a Gophers or Vikings game stinks for this one.

That’s not saying you shouldn’t go. Outdoor games carry a certain throwback charm or they wouldn’t still be popular. The ticket price also includes a Minnesota-Chicago NHL alumni game, and for some it might be worth a couple hundred to boo Al Secord in person one more time if he shows up. Or not. Let the chilly buyer beware.

The NHL puts on three sets of outdoor games — the annual Winter Classic on New Year’s Day, the Heritage Classic among Canadian teams at irregular intervals, and the Stadium Series introduced in 2014. That Minnesota couldn’t land an outdoor game before now is unfortunate. Bettman cited Leipold’s “utter relentlessness” pushing for it, and one sensed Bettman finally gave in, much like a parent buying a child that toy he or she has been pining for.

Wild center Jordan Schroeder, a former Gopher who grew up in Prior Lake and Lakeville, doesn’t understand why it took Minnesota so long.

“It’s kind of shocking, to be honest,” he said. “I thought it would be one of the first places to get one. I don’t know if it was a venue issue or not, but it’s all over now. They got one. It’s very exciting for the state, the fans and the organization. I’m sure it will be a packed house and the place will be rocking.”

Actually, it’s easy to parse why. For a national television audience, this game is more about the Blackhawks than the Wild. A franchise with one division title, no Stanley Cups and no flashy star rates little national cachet.

Bettman wouldn’t confirm it Wednesday, but the league never considered the Wild sexy enough for an outdoor game until they signed Parise and Ryan Suter in 2012, then won playoff series the last two years.  And if the Stanley Cup champion Blackhawks hadn’t agreed to play their fourth outdoor game since 2009, the Wild might still be left out. Leipold, hobbling on an antique wooden cane until double hip replacement surgery next week, hinted at the last point.

“Form whatever conclusion you want,” Bettman said. “We take a whole host of factors into evaluating when the best time to go into a market with a game, and we’re thrilled to be coming here now.”

The NHL scheduled the press conference on the field for 1 p.m. Central Time, streamed live on NHL.com and televised on Fox Sports North. The weather cooperated, 81 degrees with pleasant sun. But apparently no one told NHL officials what happens in Minnesota at 1 p.m. on the first Wednesday of every month.

Tornado warning sirens went off just as master of ceremonies Dave Schwartz of KARE-11 stepped to the lectern to begin his remarks. Bettman, seated nearby in a light-colored suit and open-neck shirt, squirmed as Schwartz waited out the noise. Schwartz introduced a video of highlights from previous outdoor games, and as soon as it started the sirens blared again, drowning out the audio in the stadium. Bettman was not amused.