Once Minnesota Timberwolves head coach Sam Mitchell has defensively flexed the control freak aspect of his communication style a time or two, he often has some revealing insights on how he regards the eminently entertaining collection of basketball players under his command.

It was Tuesday night, and fresh off stirring road victories in Chicago and Atlanta, the Wolves had just been beaten by the Charlotte Hornets, 104-95, in large part because three starters — Andrew Wiggins, Ricky Rubio and Kevin Garnett — did not play due to injury, or, in KG’s case, age-related precaution.

In the postgame press conference, a member of the media had the temerity to ask Mitchell how he thought second-year forward Adreian Payne had played. It was a softball question. Payne had nearly doubled his playing time with 20 minutes, after logging a total of 21 in the previous six games. He sank four of five shots, including two three-pointers, grabbed five rebounds and had two assists. The Wolves were a plus-13 when he was on the court.

Mitchell treated this solicitous query like a brushback pitch.

The room fell silent for a moment as the collective media tried to figure out how to continue the basic function of a postgame press conference — obtaining the coach’s view of how the players whose fates he controls performed, both individually and as a team — without being accused of gross insensitivity.

Given that the Wolves are likely to lose about 50 times this season, taking Mitchell’s absurd sense of impropriety and victimization seriously going forward would conveniently allow the coach to take a pass on a crucial aspect of his duties — explaining his team to the public.

That pass obviously shouldn’t — and won’t — happen. Which makes the pushback from Mitchell akin to a rookie mistake, albeit one from a head coach who has already logged more than 350 NBA games at the position.

Then the coach atoned for the gaffe by providing an informative and enlightening answer to a relatively innocuous question. Specifically, he was asked what he said to the team when he went into the locker room right after the game — was he upbeat or hard or something else in light of the circumstances of injury?

“Obviously we are disappointed. I didn’t go in there and start passing out candy,” Mitchell began. He went on to detail the various things that pleased and displeased him about the performance. But the real payoff was the conclusion of his answer, which was a cogently detailed rendering of his standards for judging individual players out on the court.

“It is amazing to me; the first thing that players look at on the stat sheet is how many points they scored. Well, as a coach, I don’t look at that. You think I am concerned about how many points were scored by someone who had a chance to play and we lose by 11?

“No, I am going to look at turnovers. Did you carry out your principles on defense? Did you set a screen? Did you get back in transition? Those are the things we are going to look at. Not the points. That’s the last thing on the list.”

Euro in a strange land

The performance of rookie power forward Nemanja Bjelica lends credence to Mitchell’s stated criteria. Bjelica — pronounced BJELL-eetz-ah — currently ranks sixth on the Wolves in points scored, yet leads the team with 235 minutes played. He is routinely the first player off the bench, replacing starter Kevin Garnett five or six minutes into the game, and is often on the court when it matters most in crunch time.

Like fellow Wolves rookie Karl Anthony-Towns, the 6-10 Bjelica has a remarkably refined skill-set for a lanky big man that is only going to improve as he grows accustomed to the NBA. This is not to suggest that Bjelica can approach Towns’ ceiling as a player. At 27, Bjelica has already matured physically, where Towns can still literally grow into his body. And as the first overall pick in the NBA draft, coming from a college program explicitly designed to groom players for the pros, Towns is atop the team’s pecking order for decision-making, and he already seems more accustomed to the uniquely physical bump-and-grind at this level.

In other words, Bjelica is still in the process of finding his role and weaning his body into his new environment. Like most Euros, the Serbian native functions most effectively in a team system where players are hewing to set assignments and making fundamentally sound decisions. But he is adding unnecessary lessons to his learning curve. Where he was a bona fide star in Europe — awarded the 2015 Euroleague MVP and awarded the nickname Professor Big Shots for obvious reasons — he has circumscribed his game to an unhealthy degree in an effort to fit in with the Wolves. 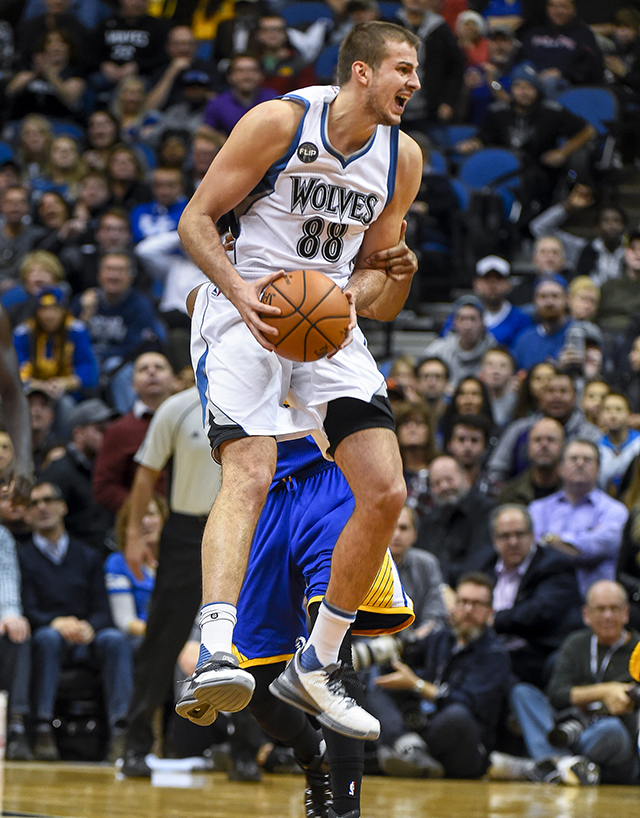 MinnPost photo by Craig Lassig
Nemanja Bjelica has a remarkably refined skill-set for a lanky big man that is only going to improve as he grows accustomed to the NBA.

Bjelica’s excessive caution has been most blatant in the shuffling of his feet before he starts his dribble and in his disinclination to let fly when open for a three-pointer. Seven of his 10 turnovers have come on traveling calls that at least partially stem from him assessing his options rather than trusting his intuitive flow, creating the pause that is catnip for officials who have made clamping down on travels a “point of emphasis” this season. (That Bjelica is pasty-skinned rookie Euro likewise does him no favors with the refs.)

Meanwhile, there have been at least a dozen occasions over the Wolves first eight games where Bjelica turned down an open trey to facilitate ball movement. Often his passes set up a theoretically higher-percentage shot or a similarly open three-pointer for a teammate. This unselfishness is not going to penalize him with Mitchell, who appropriately preaches ball-movement. But there is evidence that the team would be better off if he chucked it up.

There have been many promising and enjoyable elements to the Wolves 2015-16 season thus far, but an embrace of the modern game in the form of three-point shot attempts is not one of them. After an encouraging preseason where the Wolves ranked near the top of the NBA in three-pointers, the team is not only again languishing at the very bottom — 30th out of 30 teams — in three-point attempts, but is launching 3.6 percent fewer of them than last year’s crew under Flip Saunders.

Bjelica is already Minnesota’s most obvious three-point threat. He converted more than 35 percent of his long-range attempts his last three years in Euroleague, including 41.6 percent in 2013-14. He also understands the added value of three-pointers, attempting 29 treys versus 16 two-pointers in his shot selection thus far in his first NBA season. The wisdom of the shots he has taken is indisputable: He is 13-for-29 from distance, for 44.8 percent; and 10-for-16 on twos, for 62.5 percent; for a collective eFG% of 65.6 percent.

It’s the shots he passes up that are problematical.

Even inflated by Bjelica’s accuracy, the Wolves as a team are shooting just 34.8 percent from long-range (14th best in the NBA) and 46.9 percent on twos (18th best). On a team of mediocre shooters, Professor Big Shots too often is a facilitator.

Another impediment in Bjelica’s development is not his fault. Because Mitchell needs to establish defense as a team culture, Garnett gets precious minutes with the rest of the starters at the onset of the first and third quarters at Bjelica’s expense.

Yes, Bjelica leads the team in minutes-played with 235. But the players with whom he has shared the court most often this season are Kevin Martin (151 minutes), Gorgui Dieng (129 minutes) and Zach LaVine (126 minutes). That’s a trio that is mostly incapable and/or unwilling to create the kind of offensive flow that would maximize Bjelly’s skill set.

Sure enough, the Wolves are minus 4.3 points per 100 possessions when Bjelica is paired with Martin, minus 6.2 points on the Bjelly-Dieng duo, and a whopping minus 8.1 points when it is Bjelly with LaVine.

Being saddled with the second unit in the primary reason why the Wolves allow 9.4 more points per 100 possessions when he plays, compared to when he sits. (They score 3.1 more points, however.) But some of it is that Bjelica could improve his defensive judgments and angles. He has been surprised by the physical quickness of NBA opponents on interior pick-and-rolls, where a player can get past his length or into his body before he reacts. Some of this is just being accustomed to the habits of Euroleaguers. And some of it is because Bjelica gets no love from officials and thus can’t be as aggressive defending penetration as he should be and probably wants to be.

In a season where the instant emergence of teenager Karl Anthony-Towns as a readymade borderline All Star is the big news, along with the continued development of reigning rookie of the year Andrew Wiggins, Nemanja Bjelica is a vital footnote who will be increasingly difficult to overlook. Developmentally, he is the only healthy member of the roster in his chronological prime at age 27. He is smart, long, and generous with his skills.

As he gets to know the NBA, and we get to know him, it is another ray of hope in an already encouraging season.