Since its founding in 2004, the Minnesota Whitecaps offered a haven for two types of women’s hockey players – ones aspiring to play in the Olympics, and others unwilling to set aside their helmets, sticks and shoulder pads just yet.

Winny Brodt Brown used to be the former, but at 37 now personifies the latter. Named the first Minnesota Ms. Hockey at Roseville High in 1996, Brown moved on to a productive career at the University of Minnesota and won two world championship silver medals for Team USA.  Brown, her sister Chelsey and Edina’s Jenny Schmidgall Potter were the Original Whitecaps; their fathers, Jack Brodt and Dwayne Schmidgall, started the team so their daughters could continue to play after college.

The tenacious Potter kept at it long enough to bag four Olympic medals, beginning with gold in 1998; she now coaches Ohio State. The Brodt girls never made it to the Olympics but skated alongside plenty of Olympic medalists with the Whitecaps, among them Hockey Hall of Famer Angela Ruggiero and University of Minnesota great Natalie Darwitz.

“We didn’t want to stop playing because it had always been fun,” Brown said after a recent Whitecaps practice at Minnesota’s Ridder Arena. “The locker room piece of it, if you’re an athlete, it’s hard to give that piece of the game up. Not just on the ice.”

Women’s hockey players are true amateurs. Post-graduate leagues, even those loaded with Olympic talent, never generated enough cash for players to draw even modest salaries. But that’s changing. Brown, now a mother of two, may see her first payday as a hockey player if she can hang in one more season.

The fledgling National Women’s Hockey League, the first women’s league in North America to pay players, has designs on the Whitecaps as a possible expansion team. The N.W.H.L. is eight weeks into its inaugural season, with franchises in New York, Boston, Connecticut and Buffalo. Attendance is encouraging – about 900 per game – and this week the league landed Dunkin’ Donuts as its first corporate sponsor.

Two months ago, the Whitecaps flew east for exhibition games with Connecticut (an 8-4 loss) and New York (a 5-2 victory). This weekend the Boston Pride, with former Gophers star Gigi Marvin and fellow U.S. Olympians Hilary Knight and Brianna Decker, come west for a pair of exhibitions with the Whitecaps at Ridder Arena, 6 p.m. on Saturday and 1 p.m. Sunday. Tickets are $5, with kids 12-and-under free. The Whitecaps trot out three Olympians as well — ex-Gopher Anne Schleper, and North Dakota twins Monique Lamoureux and Jocelyne Lamoureux-Davidson.

“When the players heard we were going out there, they were excited,” Pride general manager Hayley Moore said in a telephone interview from Boston. “I know they’re going to be a tough team to play against.” 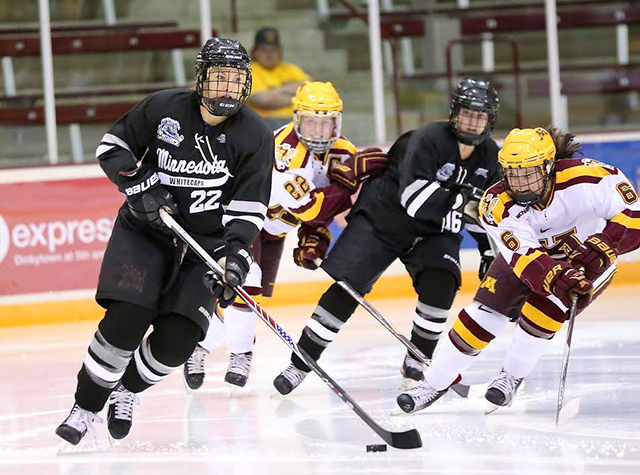 This is a big deal for women’s hockey in the State of Hockey. KSTC 45 will broadcast Saturday’s game live, with the New England Sports Network (NESN) picking up the feed in the Northeast and nationally via DirecTV and the Dish Network. (KSTC donated the airtime, and the Whitecaps are paying production costs of close to $20,000.) And N.W.H.L. Commissioner Dani Rylan plans to be on hand Saturday.

The exhibitions highlight a weekend of women’s hockey events, beginning with Friday night’s U.S. Hockey Hall of Fame Game between the Minnesota Gophers and St. Cloud State at the Roseville Skating Center. A four-on-four outdoor tournament for kids organized by Brown follows Saturday at the John Rose Oval in Roseville.

Though billed as the first “professional” women’s hockey games in Minnesota, only one team is being paid. N.W.H.L. salaries range from $10,000 to $25,000 per season – certainly not lucrative, but a step up from nothing. Rylan never identified the benefactors who put up the league’s seed money, which worried some players, but Moore said so far the paychecks keep coming.

“I don’t think there was concern it would be a problem,” said Moore, a former Harvard assistant coach and a two-year captain at Brown. “We knew everything was set in stone for the first year.”

Even before the N.W.H.L. dropped its first puck, the big-thinking Rylan targeted Minnesota as the logical place for its first franchise outside the Northeast. Though the number of girls playing high school hockey in Minnesota declined seven percent the last 10 years, the state still produces more than any other — and more than one-third of all girls participating nationally, according to the National Federation of State High School Associations. And USA Hockey counts 54,507 registered boys and girls players, also tops among all states. 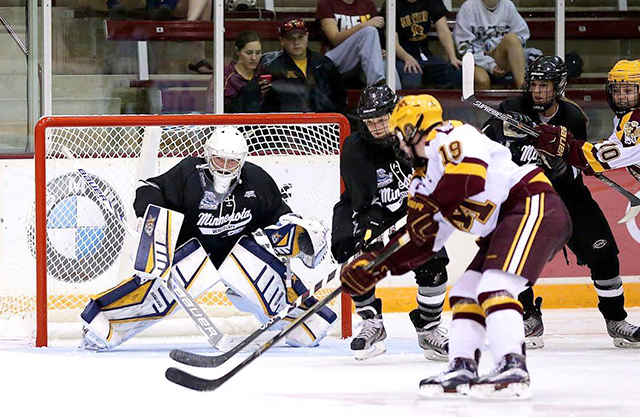 “When we think of expanding down the line, it’s somewhere we definitely want to go,” Rylan told espnW.com in early October. “We want to start building that alliance and that relationship as soon as we can.”

“Minnesota would be a fantastic N.W.H.L. market as the state has more active women and girls playing hockey than anywhere else in the United States,” he wrote in an email. “That being said, the expansion discussion involves many different things including budgets, logistics, venues, travel, scheduling, etc.”

For both leagues, travel is the biggest sticking point. The N.W.H.L. situated its founding franchises within bus distance to limit travel costs. The C.W.H.L. is more spread out, with two franchises in greater Toronto and others in Calgary, Montreal and Boston. Either way, the Whitecaps would have to fly everywhere. That’s expensive. Both leagues assume all travel costs.

Last year the Whitecaps raised about $200,000 toward a possible $500,000 C.W.H.L. expansion fee. For now, Halldorson said the team is content with finishing this season and seeing what happens.

“Would we like to be in a league? Of course,” Halldorson said. “It means more games, and it would be a big step in the right direction. We just have to let things play out. As of right now, we have to plan as if we won’t be in a league next year.”

The Whitecaps operated as the only American franchise in the Canadian-based Western Women’s Hockey League until the league suspended operations in 2011. After that, the Whitecaps kept on with a sporadic, independent schedule. This season’s lists only 12 games – three against the Shattuck-St. Mary’s prep team, and the rest among Division 1 college and N.W.H.L. opponents. 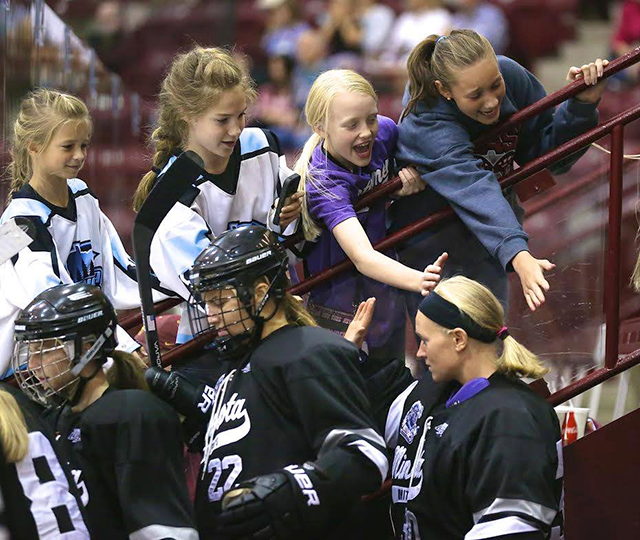 Minnesota Whitecaps
This season’s lists only 12 games – three against the Shattuck-St. Mary’s prep team, and the rest among Division 1 college and N.W.H.L. opponents.

The current Whitecaps are loaded with former Gophers and coached by yet another one, Robb Stauber, the goaltending coach for Team USA and the first goalie to win the Hobey Baker Award, in 1988. Jack Brodt remains one of his assistants. Neither Stauber nor anyone else draws a salary.

“Never even entered my mind,” Stauber said. “My interest level is being able to help players that maybe one day can help the national team. That’s my reason for doing it, my selfish reason. We can be better at a national level. If there’s something I can do to do that, and I have the time and the energy, I’m doing it.”

Brown is long past the time when that was feasible. Now, some of her teammates are girls she coached privately or with the Junior Whitecaps age-group team she founded.

“Winny was my mentor all growing up,” said forward Bethany Brausen, the former Gophers captain and another Roseville product. “On behalf of all the other girls in my kind of age group, we would all say that. How awesome is it that Winny can be out there, and be the highest competition person out there still?”

And maybe, if things fall right, she can finally be paid for it.

Meet what may be Minnesota’s next professional sports franchise: the Whitecaps