MinnPost is on its annual holiday break, which is my cue to pull back a bit and cite some of the more significant factors setting the course for the Timberwolves 2015-16 season thus far. With more than a third of schedule already in the books, there are no shortage of themes — most of them positive, for a change. 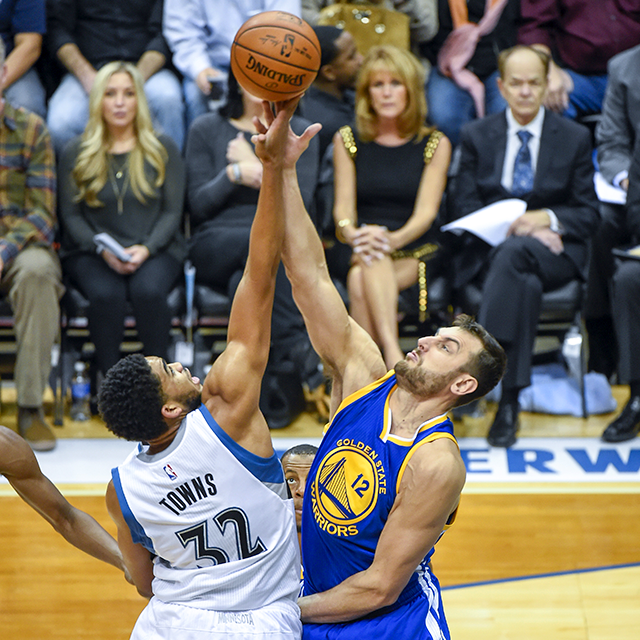 MinnPost photo by Craig Lassig
Karl-Anthony Towns’ refinement of his game — his footwork in the low post, his ability to finish with either shooting hand, his dribbling, court vision, passing instincts, shooting range, timing on his shot blocking — already are rendered with such sophistication, it is difficult not to gush.

1. Rookie Karl-Anthony Towns is already playing like an All-Star
And has the maturity, work habits and environment to keep improving. Through the first 30 games of his NBA career, Towns is flashing a precociously broad-based skill set reminiscent of Tim Duncan as a rookie. This is remarkable because Duncan spent three more years at Wake Forest than Towns did at Kentucky honing those skills — and because Duncan has gone on to become one of the top three or four big men ever to play the game.

Towns’ only apparent flaws are borne of inexperience, as in leaving his man too soon to challenge a shooter. But the refinement of his game — his footwork in the low post, his ability to finish with either shooting hand, his dribbling, court vision, passing instincts, shooting range, timing on his shot blocking — already are rendered with such sophistication, it is difficult not to gush. Add to that: diligent work habits, a profound self-awareness about locker room dynamics and media relations, and the presence of the fiery Kevin Garnett as mentor, and it feels like Towns won’t fall victim to the psychological trap doors and mirror-ball myth-building that waylaid the last Timberwolves rookie who quicken the pulse and raised the hopes of the fan faithful this dramatically — Stephon Marbury.

Like Duncan, Towns seems like the kind of pillar around whom you can build a winning culture. Barring injury — the capricious grim reaper in the shadows of every athlete’s career — he seems poised to challenge Garnett’s sprawling dominance of the franchise record book. For now, he’s just fun to watch, because the more you pay attention, the more talent he reveals.

2. Andrew Wiggins and Zach LaVine have each taken a step forward this season
Aside from the near-nightly smorgasbord of delights Towns unveils each game, the most heartening thing about the Wolves season thus far has been Wiggins’ embracing the role of go-to guy in crunchtime. His coming-out party in that regard occurred in back-to-back road wins over the Bulls and the Hawks in early November, when he used his spin moves and leaping ability in both post-up and dribble penetration to get to the rim and elevate over bigger opponents, either scoring outright or drawing the foul.

Since then, defenses have geared up to stop him, but coach Sam Mitchell continues to feature the second-year swingman out of timeouts and in the clutch late in ballgames, feeding his confidence and stoking his competitive desire. Mitchell has also wisely deployed Wiggins primarily at shooting guard, where his lithe but long frame more often provides him with a matchup advantage. He remains the iron man of the rotation — the last starter subbed out of the game — which hurts his overall stat line but provides an important bridge for continuity of play and the resting of veterans in Mitchell’s substitution schemes. Given his quiet nature, it is perhaps fitting that, while a remarkably accomplished player yet to hit his 21st birthday, he is overshadowed somewhat by the emergence of Towns.

Zach LaVine is not nearly as accomplished, but he is no longer as much of a train wreck this season, sabotaging his teammates less often while playing out of position as the backup point guard. The biggest improvement is on defense. Last season, opponents scored an absurd 115.1 points per 100 possessions when LaVine was on the court. This season it is 106.8 points — hardly stellar, but proof that LaVine has honed his stance and other fundamentals while using his lateral quickness for better on-ball defense.

On the other side of the ball, LaVine has significantly cut down on his turnovers, mostly by wisely deciding to call his own number more often and by learning not to force passes or dribble penetration when the defense is set against it. He remains a phenomenal athlete who frankly has surprised me with his level of improvement thus far, as he once again is denied the opportunity to play his natural shooting guard spot due to ongoing presence of veteran Kevin Martin (who needs to be traded) and the recognition that Wiggins is also a “natural” two-guard right now.

3. The Wolves continue to be deficient in a crucial element of the modern NBA game
The shooting distance charts on the stats page at nba.com make for depressing reading, especially when you consider that the three-point shot is accomplished from a minimum distance that ranges from 22 feet away from the basket in the corners out to 23 feet, 9 inches at the top of the arc.

Relative to other NBA teams, the Wolves shoot most frequently from 15-19 feet out (third in the NBA) yet convert those midrange jumpers at a middling 16th best accuracy of 39.8 percent. From 20-24 feet out, the Wolves are 25th in frequency and yet 6th in accuracy, and from 25-29 feet out they are 23rd in frequency and next-to-last, or 29th, in accuracy. The numbers point to a mixture of bad philosophy and inept marksmanship. There is a sweet spot in that 20-24 foot range that needs to translate into more tight three-pointers and fewer long two-pointers.

This is obvious because the Wolves shoot the second-fewest three-pointers in the NBA and rank 26th in accuracy. Yet they aren’t forsaking threes for “better shots.” They rank 20th in the frequency of higher-percentage shots within 5 feet of the basket. They draw a lot of fouls — they lead the NBA in points per game from free throws — but, especially in crunchtime, are thus at the mercy of referees. Besides, more accurate three-point shooting will better space the floor and open up the painted area for even more layups and foul-drawing opportunities.

Sam Mitchell has acknowledged that a fair bit of his offensive philosophy is cribbed from the late Flip Saunders, who, despite all his many brilliant stratagems on offense, never properly utilized the three-pointer. To Mitchell’s credit, the Wolves are shooting 10 percent more threes than they were under Saunders at this time a year ago. But the 32.4 percent accuracy is down a titch.

Mitchell properly notes that there aren’t a lot of great long-range shooters on the roster. European rookie Nemanja Bjelica has been a disappointment from beyond the arc (33.8 percent) as well as on defense and adjusting to the NBA rigor, and three-point specialist Damjan Rudez lacks the defensive quickness to justify regular rotation minutes, despite making 47.4 percent of his attempted treys.

But Mitchell isn’t entirely off the hook here. Smart teams incorporate and prioritize the three-pointer into their set schemes as a growth opportunity for improvement, the same way Mitchell concentrates on and tolerates the growing pains of defense or ball movement. LaVine, Wiggins and Bazzy Muhammad are all players who are either exceptionally strong or quick at getting to the basket, compelling opponents to play off them on the perimeter. Developing a reliable three-pointer in their arsenal would be a huge benefit. Yet just 28.7 percent of LaVine’s shots are threes, and for Muhammad and Wiggins it is 22.8 and 15.6 percent, respectively.

Granted, merely chucking up treys is not a panacea for the offense, and the game is not as simple as the math, where 33 percent of three-pointers are worth as much as 50 percent of two-pointers. But developing a system and philosophy where the three-pointer is a viable, complementary weapon in a team’s offensive arsenal is a necessity to compete effectively in today’s NBA. And the Wolves don’t have that system or philosophy right now.

4. The veterans are earning their keep
When Kevin Garnett was awarded a two-year contract in excess of $16 million this summer, most observers believed it to be a steep price to pay for a part-time player who had already compromised his own negotiations by openly admitting he someday wanted to buy the franchise. But KG has invested himself — on the court as a tone-setting starter on defense, on the bench as voracious cheerleader and adviser, and in practice as a mentor whose heart is always in overdrive and whose brain is loaded with more than 20 years of NBA jousting, surviving the plummet from automatic Hall of Fame talent to dogged role player. The father of Karl-Anthony Towns recently said having Garnett as a teammate is the best thing that ever happened to his son’s career.

Tayshaun Prince and Andre Miller are considerably lower on the financial totem pole, pulling in slightly less than $2 million apiece this season. Both have been cited by younger players as being a positive influence on both the physical fundamentals and the mental approach to the NBA grind. Meanwhile, the Wolves defense is transformed from sub-mediocre to solid simply by adding Prince to the starting lineup, and Miller has rescued the Wolves offense more than once with his wizened point guard play this season.

5. Uncertainty lingers
In the day-to-day routines that put the season on a grid, the Wolves are doing a marvelous job of moving on from the tragic death the architect of the team, Flip Saunders, just three days before the opener.

But in the grand scheme of things, how this franchise will proceed post-Saunders is still very much up in the air. Both General Manager Milt Newton and head coach Sam Mitchell explicitly have the word “interim” before their job titles. Nor is it absolutely clear to the public how decisions are made and what nuances are rendered through the chain of command.

This matters because the Wolves suddenly possess the rights to two of the most talented and exciting players in the NBA for another four or five years, which thus becomes an absolutely vital stage in the ongoing development of both the franchise and its superstars-in-waiting. It makes the Wolves a coveted landing spot for anyone wishing to fill in the complementary personnel or chalk up the x’s and o’s for Towns and Wiggins moving forward.

How Newton and Mitchell will respond to the somewhat contradictory challenge of grooming the prized assets and putting wins on the ledger will be worth watching, especially at the February trading deadline. The needs of a coach and a general manager are not always in sync under the best of circumstances, let alone a subtle pressure cooker where both of working to earn extensions on their highly coveted jobs.

Owner Glen Taylor is likely to have some top-notch candidates to fill the posts once occupied by Saunders. On the other hand, Taylor has always preferred a family-type atmosphere — often derided as a “country club” — and front office and sideline employees whom he knows personally. And we don’t know how much, if any, input will be allowed to group in negotiations to buy 30 percent of the operation.

Thus far, this season has been successful in terms of developing the stars and winning some games on the court. But the schedule has become more rugged, and the campaign is long.

One thing seems fairly certain: The ambitious vision Saunders had for this makeover of the team has already been ratified by the events described above. I’ll delve further into that — and into the rest of this franchise on the rise, playing the best game on the planet — when we return in January.