It’s been a rough year in the Twin Cities for those whose sports interests revolve around the major men’s teams. The Twins missed the playoffs for the fifth consecutive season, and the Timberwolves for the 11th. The Wild lasted two rounds into the playoffs – an improvement – and the Vikings might qualify as a wild card, but University of Minnesota football and men’s basketball teams regressed. Taken together, it’s been 24 years since any of them last won a championship. (Here’s looking at you, Jack Morris.)

Here’s a suggestion for the frustrated among you: If you’re willing to broaden your horizons, here are seven teams, people and developments in the world of Minnesota sports to be appreciative of — and excited about going forward. You might even find a title or two in the bunch. 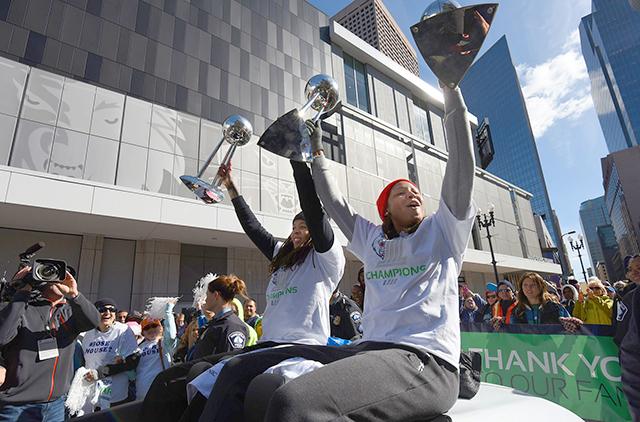 MinnPost photo by Mike Dvorak
Guard Seimone Augustus and forward Maya Moore holding the 2011 and 2013 championship trophies during their 2015 championship parade in October.

Coach Cheryl Reeve and assistants Shelley Patterson and Jim Petersen melded the pieces together on the fly. It certainly wasn’t seamless, but eventually it all came together, largely thanks to the selflessness and winning culture already established.

With Maya Moore and Fowles in their primes, the Lynx positioned themselves as championship contenders long-term even with smaller contributions from Augustus, Whalen and Brunson. Augustus said in October this will be her last winter playing overseas so she can stay fresh for the WNBA season, encouraging news for a dynamic scorer slowed by leg injuries the last two years. The best professional franchise in the Twin Cities keeps on rolling.

2. An aggressive Minnesota United
What a year for the local North American Soccer League franchise: acceptance into Major League Soccer, a 40 percent bump in attendance, nine sellouts of 9,000 or more among 16 home matches, and a deal for a new stadium in St. Paul that the United will pay for.

And this off-season, the United added two more Best XI picks – forward Stefano Pinho of Fort Lauderdale, the league’s MVP and top goal scorer, and midfielder Lance Laing from FC Edmonton. The United still need backline help, but the team should be exciting — and high-scoring. If you’ve never been to the National Sports Center for a United game, it’s an experience, from the rhythmic cheering of the Dark Clouds fan group to the ring of food trucks that set new standards for eclectic ballpark food. I’m getting hungry just thinking about it.

3. Karl-Anthony Towns
Flip Saunders died of cancer before remaking the Timberwolves into a model NBA franchise. Towns, the 7-footer Saunders drafted four months before his untimely death — a phrase I still can’t believe l’m writing — stands as his legacy, the possible cornerstone of a team Saunders will never get to see. 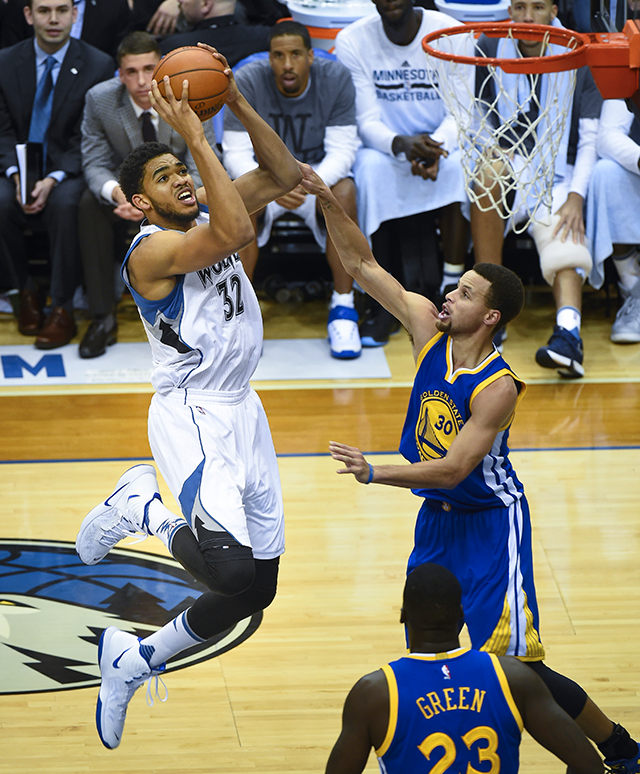 MinnPost photo by Craig Lassig
Karl-Anthony Towns’ manner is so engaging that he draws people to him — exactly what you need from the face of your franchise.

That Towns, not Kevin Garnett, addressed the Target Center crowd at the home opener memorial for Saunders revealed much about his maturity and character. Towns’ manner is so engaging that he draws people to him — exactly what you need from the face of your franchise.

If he develops into the superstar everyone expects, it’s up to general manager Milt Newton to surround him with the right coach and supporting cast. Expect a lot more losses, some personnel changes and maybe a new head coach before things turn, but Towns’ development will be fun to watch.

4. University of Minnesota volleyball
Though bowing out in the NCAA semifinals Thursday night, the Gophers re-established themselves as a national power under former U.S. Olympic men’s and women’s coach Hugh McCutcheon. College volleyball, like WNBA basketball, must be seen in person to be appreciated, and the power and athleticism of these Gophers packed the Sports Pavilion nightly.

“We’re fortunate to be in a state where volleyball matters,” McCutcheon said at the Final Four. “There aren’t many places in the country, let alone the world, where you get to compete in front of 5,700 people or whatever. It’s a phenomenal thing.” 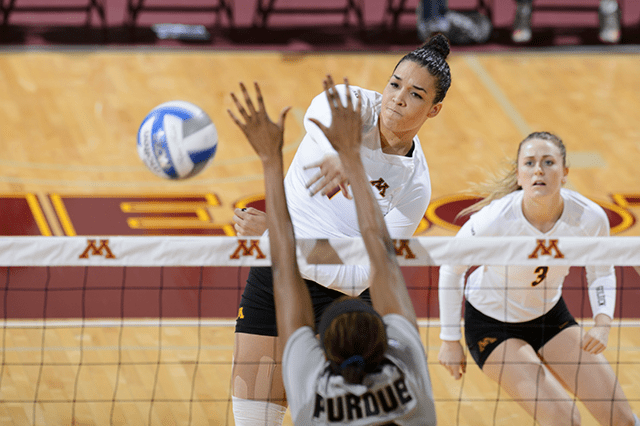 If you came late to this and never got to “The Pav,” for a match, don’t fret. Outside hitter Daly Santana, the Big Ten’s most valuable player and one of the Gophers four All-Americans, was the only senior among McCutcheon’s top nine players. Next fall might be just as interesting as this one.

5. MIAC football
Nothing beats a Division III game for food, fun and value. None of the things that turned Division I football repulsive to many of us — the bloated staffs and salaries, kickoffs times beholden to television, four-hour games, and this absurd recruiting cottage industry where anyone with a laptop and a wireless connection can pass themselves off as an expert — pollute Division III. And that’s fabulous.

It’s hard to beat driving up to a Minnesota Intercollegiate Athletic Conference game, parking for free, paying $8 or less for a ticket (no handling fees), grabbing a burger or a brat at the student-staffed grill behind the grandstand, then settling in to watch two teams with aggressive coaches tangle. MIAC teams go for it on fourth down, kick onside, run fake field goal plays. And for the most part, players and coaches behave themselves. (St. Thomas-St. John’s gets a little chippie, but what do you want from two schools competing for something called the Holy Grail?) Without the demands of television, games take about 2½ hours.

And this is my favorite part: Once the game ends, players and parents from both teams — many of whom know each other from Minnesota high schools — mingle on the field for at least 45 minutes. Visiting teams never hurry to the bus. It’s a beautiful thing.

So next fall, when you’re griping about the price of Vikings and Gophers tickets, remember St. John’s, St. Thomas, Bethel, or whatever Division III institution is nearest to you. Bring an open mind, an appetite, and a blanket. You’re welcome.

6. Hannah Brandt and Sarah Potomak
One is a senior from Vadnais Heights, the other a freshman from British Columbia. Both are dynamic scorers for Minnesota women’s hockey, winners of three of the last four NCAA championships.

The Gophers have been so good under Coach Brad Frost, going 41-0 in their record-setting 2012-13 championship run, that anything less than dominance suggests a problem. There isn’t one. At 15-3, the third–ranked Gophers trail Wisconsin by five points in the Western Collegiate Hockey Association standings. The Badgers, still coached by 1980 Olympic gold medalist Mark Johnson, were bound to be good again; from 2006-11, Wisconsin won four national championships and lost once in the finals.

7. Rachel Banham
Break Lindsay Whalen’s career scoring record at Minnesota, especially coming back from an anterior cruciate ligament tear, and you’re something special. Rachel Banham, a dynamic guard shuttling among four positions this season for the thin and undersized Gophers, returned on a medical redshirt for one reason — to play in her first NCAA Tournament. Don’t miss her.  If you do, you’ll get another chance this summer in the WNBA.

8. The Saints
Can a new ballpark improve a team? The St. Paul Saints won their first American Association division championship in nine years in their first season at CHS Field in Lowertown, setting a binder full of team and individual records.  Sioux City, the only team with a better record, eliminated the Saints in the Association semifinals. Manager George Tsamis already re-signed four regulars back for next year – catcher and Association player of the year Vinny DiFazio, pitcher Robert Coe, outfielder Willie Argo and shortstop Anthony Phillips. Tickets are a little more expensive and parking is trickier, but the Saints look to be as entertaining as ever. Fun is good. So is winning. 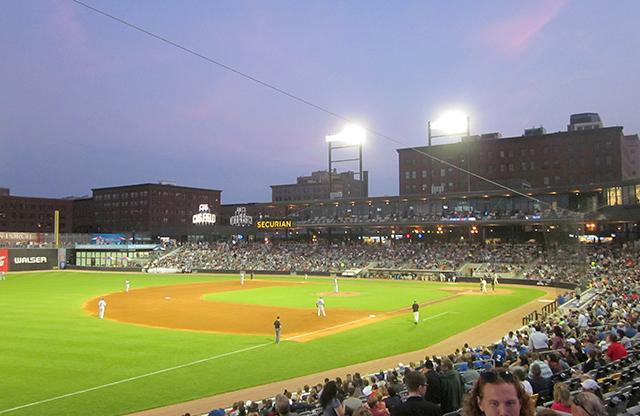 The 8 best Minnesota sports stories of 2015