Let’s start with the basics before we spelunk through the intrigue involving the Minnesota Timberwolves in the 2016 NBA Draft on Thursday night.

The Wolves selected point guard Kris Dunn of Providence with the fifth overall pick of the first round, their only official activity of the evening.

Listed at 6’4” in height and 220 pounds, Dunn has great size for the position. At 22, he was by consensus regarded as the most NBA-ready guard in the draft. His grit (he was a football star in high school) and defensive acumen and versatility fit the prototype associated with and desired by new Wolves coach and President of Basketball Operations Tom Thibodeau.

Looked at in a vacuum, without context, it is hard to dispute the wisdom of this pick. Add in the vagaries of the Wolves roster — what this team does and doesn’t need in terms of balancing experience, skill sets, positioning and chemistry — and the wisdom of selecting Dunn still trumps the arguments against it.

Add in the various ways the addition of Dunn might prompt the Wolves to change their roster moving forward, and things become murkier. But as of right now, instead of succumbing to hot-take panic driven by social media, Wolves fans should admire the proverbial bird in the hand and wait and see what, if anything, emerges from the bush.

In baseball, the offseason was (and occasionally still is) referred to as the “hot stove league” because fans would gather around a warm place in the winter to discuss rumors and debate theories about how to improve their favorite team.

NBA teams have the smallest rosters of any of the major professional team sports in this country, so personnel changes generally have more impact than in baseball, football or hockey. Add in the pervasive infiltration and immediacy of social media, especially Twitter, and the NBA has taken hot-stove league kvetching and rumor-mongering to extremes that are gloriously sophisticated, spastically informative and patently ridiculous. In a market bubble of speculation, it’s bullshit as catnip, with a few nuggets of gold for the seasoned, frenzied prospector. And NBA draft night is the apogee of this phenomenon.

Heading into last night’s event, any dunce could tell you that the first two picks would be Ben Simmons going to Philadelphia followed by Brandon Ingram to the Los Angeles Lakers. The intrigue began with pick three, held by the Boston Celtics, who began the evening wanting to parlay their absurd haul of eight draft choices — three in the first round, five in the second — into some tangible stardom.

The most reputable Twitter accounts dutifully began to tweet out the scenarios. The most alluring of the bunch was a supposed offer from Philadelphia, which was willing to sacrifice two rotation players in forward Nerlens Noel and swingman Robert Covington, plus the 24th and 26th picks of the first round from their own treasure trove of draft stash, for the right to make that number three pick.

And the player they wanted was Kris Dunn.

Boston ignored this bounty — they already had quantity and were after quality—and selected small forward Jaylen Brown. Phoenix, the team choosing fourth, also had no need for a point guard, and chose 18-year old European forward Dragan Bender.

Suddenly the Wolves were on the clock with the fifth pick. Minnesota is in need of three-point shooting, as the top two marksmen in the draft, Buddy Hield of Oklahoma and Jamal Murray of Kentucky, were still on the board. But they also have to upgrade last season’s wretched defense, and in that and other respects, Dunn was the best player available.

Twitter churned on. Philadelphia was apparently still offering a monster package for the right to take Dunn, now at number five, with some reports claiming it was the same package offered Boston and others reducing it to just Noel and Covington, without the picks.

And then there was the Chicago Bulls, who a day earlier had unloaded the former face of their franchise, ex-MVP point guard Derrick Rose, in a trade to the New York Knicks. This was the same Bulls franchise and administrators who had fired Thibodeau at the end of the 2014-15 season, after years of increasing acrimony. Now, according to folks on Twitter with a good track record for scoops, they were negotiating with the Wolves on a trade that would land them Dunn as the replacement for Rose. And they were reportedly offering one of Thibodeau’s favorite players in Chicago, all-star swingman Jimmy Butler, a resourceful defender, scorer and leader who would fit in wonderfully on the Timberwolves roster.

Minnesota selected Dunn. But did they really want him or was it to facilitate a trade with Chicago? Or Philadelphia? Or anyone else coveting Kris Dunn?

Landing Butler would require more than just Dunn, however, creating an ideal scenario for a frenzy of informed Twitter speculation. The clear-cut king of the Twitter scoop, Adrian “Woj” Wojnarowski, and his staff at The Vertical were on the case, along with one of his better rivals, Marc Stein of ESPN. 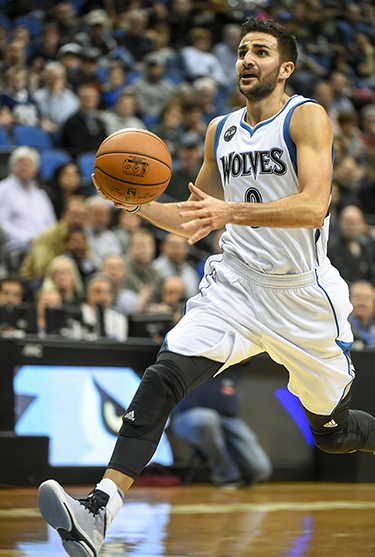 If the implication of that wasn’t clear enough, Woj himself took to Twitter a few minutes later and tweeted, “Minnesota has been shopping Ricky Rubio throughout the week. His future in Minnesota is likely coming to an end.”

This line of reasoning doesn’t add up. By dealing both Rubio and Dunn, the Wolves would be vacating their point guard position for Tyus Jones, who was overwhelmed as a teenaged rookie last season, especially on defense. Meanwhile, adding Butler without losing a swingman from among LaVine, Andrew Wiggins and Shabazz Muhammad would create a logjam at the shooting guard and small forward positions.

Jones at the point under Thibs is a purely nonsensical notion. LaVine has already proved his ineptitude at the point, and Butler is likewise not well qualified. The Wolves would thus have to shop for a point guard in free agency, while retaining a glut elsewhere on the perimeter.

About 40 minutes after Woj’s tweet, Stein of ESPN weighed in, claiming “Rising optimism on both sides, sources say, that the Bulls and Wolves can strike a deal where Jimmy Butler lands in Minnesota.”

The only reasonable way that would happen is if Minnesota agreed to let LaVine go with Dunn. But almost immediately, respected Twitter accounts from staffers at NBA.com and USA Today threw cold water on Stein’s optimism. Undaunted, Stein published a story Friday morning that left the door open to future negotiations on the subject.

The story claims that the Wolves are prepared to trade anyone on the roster but cornerstones Wiggins and Karl Anthony-Towns to get Butler, and that Chicago didn’t make the trade because it was too soon after they had dealt Rose.

Drama and the status quo

A couple of other circumstances complicate the picture here. One is that ever since he took over leadership of the Wolves, Thibodeau has damned Rubio with faint praise.

Last Tuesday, during Thibodeau’s lone pre-draft press conference, Darren Wolfson of KSTP asked Thibs point blank whether he could “win at a high level with [Rubio] as your starting point guard.” Thibs proceeded to duck the question, answering, “Well, you don’t win with one guy. You win with a team.”

The other complicating factor is the obvious amount of residual dislike that still exists between Thibodeau and the management of the Bulls, particularly Chicago general manager Gar Forman. Both sides are loathe to provide the other with an advantage and neither wants to be seen as the one making an overture. Hence, while conceding that he fielded calls about Butler, Forman maintained that he did not initiate any talks on the subject.

During their draft night press conference after making the Dunn pick, Thibodeau and Wolves general manager Scott Layden announced that there was great interest in Dunn before and after the selection. “You see how much attention comes from other teams and how much [Dunn] was valued,” Layden said. “I can’t break the confidence of other teams, but the phone was ringing pretty good.”

Meanwhile, Thibodeau expressed confidence that Dunn and Rubio could sometimes play together in the same backcourt. “I think they have good size, good toughness, it is a different look. I think you are seeing that more and more now, where you have two point guards on the floor and they are both capable of playing off each other.”

But when Jon Krawczynski of the Associated Press asked Thibs if he saw himself going with Rubio and Dunn at the point at the beginning of the season, Thibs ducked it again, replying: “We want as many good players as we can find. So that is what we are trying to do.”

As someone who freely acknowledges a lack of expertise over who will and should be taken in the draft, I was surprised at how well my uncharacteristic stab at a draft column last month held up over the intervening weeks. You can find it here in its entirety, but I’ll close with an excerpt that I believe still holds true as a defense of the new status quo.

As for picking Dunn, why not ensure that Thibs doesn’t burn out the injury-prone Rubio with his relentless defensive schemes; ones in which Rubio seems uniquely suited to help him execute? The Wolves can’t afford to flip the keys to a physically overmatched Tyus Jones too often, which will cause Thibs to rely too extensively on Rubio without a quality backup.

If Dunn lives up to his pedigree and becomes a potential two-way star, well, that’s a great problem to have. Rubio, whose relatively inexpensive contract will expire before Dunn’s rookie deal would evaporate in 2019-20 remains a tremendous asset.

Meanwhile, the free agent signing season officially begins on July 1, when team can start negotiating with players, with a signing date commencing on July 8. Anyone who recalls center D’Andre Jordan committing to Dallas during the negotiating period then changing his mind and re-signing with Los Angeles at the last moment knows that intrigue remains on the NBA. So does the near-certainty of further changes on what is already the most promising roster in Timberwolves history. Especially if it includes Ricky Rubio.