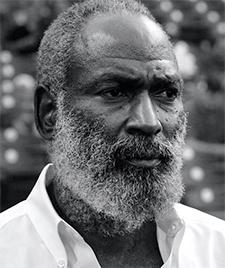 David Robinson, the youngest child of baseball Hall of Famer Jackie Robinson, calls himself a citizen of the world. He still holds a U.S. passport, though he lives in Africa, as he has for more than 30 years, devoting his life to a cause his parents inspired and nurtured.

Now 64, Robinson remembers little about his father as a ballplayer with the Brooklyn Dodgers, the first to break baseball’s color barrier. Jackie retired in 1957, when David was four. But his parents’ advocacy for human rights influenced him profoundly. Jackie and Rachel Robinson brought their three children to the March on Washington in 1963, where an 11-year-old David mingled among more than 200,000 marchers and watched Dr. Martin Luther King give his “I Have a Dream” speech at the Lincoln Memorial.

“It felt like a big force of people,” Robinson said on Friday while visiting the Twin Cities in support of Books for Africa, a St. Paul-based non-profit. “It gave off the aura of potential achievement and accomplishment.

“The ’60s were years where we were confronting several very glaring social injustices. The purpose was very clear, very personal. It was a wonderful experience, and a foundational experience for my life.”

Robinson found his calling in Tanzania, organizing local coffee farmers into a cooperative to market and sell their product themselves, reaping a greater share of the profits — a parallel to his father’s second career as an executive with Chock full o’Nuts coffee. You can’t buy the co-op’s Sweet Unity Farms Coffee in the Twin Cities yet, but Robinson is working on it. (Raised in Connecticut, Robinson still pronounces it “caw-fee,” like a true New Yorker.)

Spike Lee produced a 17-minute mini-documentary about Robinson and his life in Africa, “Of The Father and Of The Son,” for ESPN in 2015.

Founded by Tom Warth, a retired publishing executive, B.F.A. calls itself the world’s largest shipper of books to Africa — 36 million to 49 countries since its founding in 1988, according to executive director Patrick J. Plonsky. Last February, Robinson joined the 80-year-old Warth for a two-day, 20-mile fundraising walk across Zanzibar, the island off the Tanzanian coast.

“I do love books, so anything to do with books catches my attention right away,” Robinson said. “And education is a critical focus. That’s the mandate of our co-op, to educate ourselves and educate our kids. When an organization like B.F.A. contacts you, there’s complete linkage in their mission and our mission, their aspirations and our needs.”

That brought Robinson to the Twin Cities last weekend, only his second time in the area, for a series of talks and fundraising events. He spoke to about 100 Robins Kaplan employees on Friday over a taco bar lunch, in a wood-paneled conference room on the 29th floor of LaSalle Plaza.

On casual Friday, the tall, lanky Robinson dressed a little better than most of the attendees – brown corduroy sportcoat with elbow patches, a blue shirt with white pinstripes, jeans and brown dress shoes. Jackie Robinson died at 53 with a full head of white hair, but his son’s is gray and receding, augmented by a thick salt-and-pepper beard. Attendees viewed a portion of the Spike Lee film before Robinson spoke and took questions for about half an hour.

His mother took him to Africa for the first time as a 15-year-old. What Robinson saw intrigued him so much he returned four years later, after his freshman year at Stanford, visiting ten countries in a year.

He returned to the U.S. and spent ten years in New York City working in cooperative housing in Harlem. But his thoughts kept drifting to Africa, and he relocated to Tanzania in 1983. The notion of returning to his homeland to foster economic development, employing Africans as well as African-Americans, appealed to him.

“As I considered what I would do with my life, I looked at where the need was and where the impact could be,” Robinson said. “That’s why I chose Africa, because it’s a continent that is full of potential, underrepresented in terms of people working to develop that potential. I had the good fortune to go there when I was young. I enjoyed the continent and enjoyed living there, so I was good candidate for a lifetime of work in the continent.”

Robinson lives with his wife and seven of his ten children in Dar es Salaam, near the Indian Ocean, in a house with no running water. The kids haul in water in a bucket. That’s traditionally a woman’s job in Tanzania, but Robinson makes sure his two boys, 17 and 12, do their share.

“I can figure out a way to put a tank over my house, pump the water up, and have it come into my house via pipes,” he said. “I’ve decided I wouldn’t go that level yet. Let my kids do that. I’m so happy to see the water rushing out of this, what, three-quarter inch pipe. It’s so clear and so nice.”

Twice a year Robinson returns to the U.S. on business, with time to visit his mother, his sister, and his three children attending City College of New York. (The 17-year-old plans to join them next year.) There remains much to do in Africa, where Robinson splits time between his home and his coffee farm in the interior, an arduous 500-mile trip partly along dirt roads.

“I try to explain to people, I didn’t really leave America,” he said. “I expanded my base and horizons from America to include living and working in Tanzania. But it was to bring the resources into the global economy, starting firstly with America, which is both the country of my birth, a place I have not left, and the largest consumer of coffee in the world.”

What a St. Paul nonprofit, a Minneapolis law firm, and Jackie Robinson’s youngest son have to do with one another